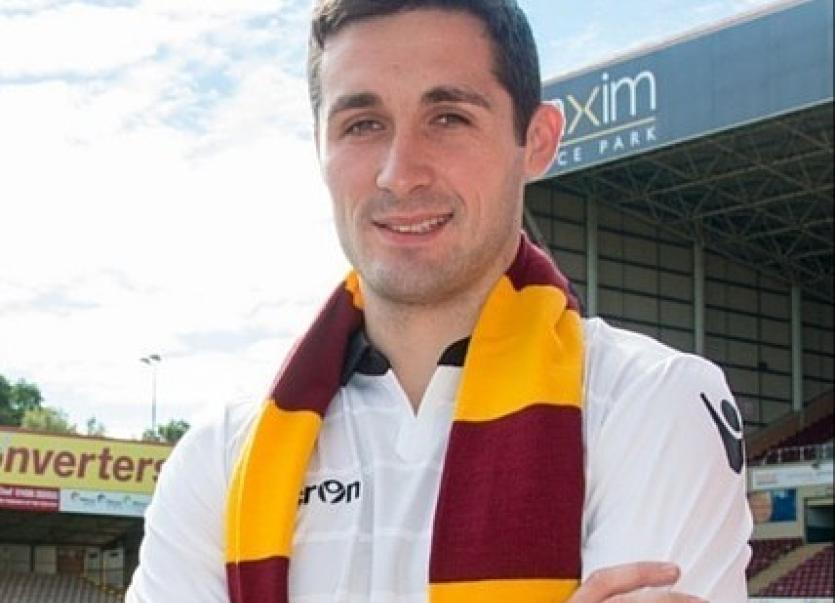 Carl McHugh . . . sent off against Hearts

It may not quite be 'last person out put out the lights', but it will be most definitely tools down for everybody in Lettermacard this Saturday afternoon for the Scottish Cup final.
In this corner of the Rosses and Celtic hotbed they won’t be supporting the green and white hoops this weekend.
Instead, the entire population of Lettermacaward, Doochary and the wider Rosses have gone over to the other side.
They will all be rooting for underdogs Motherwell this Saturday afternoon, and one of their own, 'Well captain Carl McHugh.
The 25-year-old will lead Motherwell out on the hallowed Hampden Park sod against raging hot favourites Celtic.
Former Na Rossa and Donegal underage footballer Carl was appointed Motherwell captain for this season, having joined the club in 2016 before from Plymouth Argyle.
A large number of locals including Carl’s father Gerry, his mother Mary, sisters Nicole and Sharon and brothers, Aidan and Adam, are among those making the trip and will be in the Hampden stands to roar him on.
“There is a group of 20 of us - family, friends and locals -heading over on Friday,” Gerry told the Democrat.
“We are really looking forward to it.
“It is a big day for the family and for Carl and we are all very proud of him.
“There is a great buzz around the parish and the colours are up everywhere you go, and everybody you talk to wants to talk about the final.
“The people of the area are very proud of him and they are really excited about one of their own playing in the final and captaining the team.
“They will all be glued to the televisions and radios on Saturday. It is a big thing for the area.”
Gerry added: “I was talking to him the other day and he is really excited and looking forward to the final.
“I’m not sure if I’m going to get to talk to him before the final.
“He is very busy this week. Of course he will be trying to focus on the game. But I’m sure I’ll get a word with him at some stage.
“It is a big game for Motherwell and they are really up against it. Celtic are a great side and by far the best team in Scotland.
“But you never know it is a cup final and a one off game and anything can happen.”

Meeting
Saturday is the second cup final meeting between Motherwell and Celtic this season. They met before Christmas in the Scottish League Cup final. Celtic won that game 2-0.
“I wasn’t over at that game I watched it on TV,” Gerry said.
“I go a few times every season but I haven’t been at a game in a while but I watch all their games on tv.
“They’ve had a good run in the cup and they have scored a good few goals.
Carl scored the winner in the quarter final against Hearts. They then beat Aberdeen 3-0 in the semi-final
“My advice to him is not to let the occasion get to him and enjoy the game and with a bit of luck who knows how it will go. They are up against it but it is a final.
“I don’t think it will faze him in anyway.
“He has played in big games and finals before. He has played in a couple of finals in Wembley and he played in the League Cup final before Christmas, I know this is probably the biggest of them all but I think the experience will stand to him.”
Among those who will be glued to the tv on Saturday, in Lettermacaward will be Carl’s grandparents Con and Sheila McHugh. Con is 86 and Sheila is 82.
Celtic who have already claimed the Scottish League Cup and the Scottish Premiership are reigning cup holders and are bidding for a 38th Scottish Cup success on Saturday.
In contrast Motherwell have only climbed the steps twice before as winners, in 1991 and 2011.
Carl is bidding to become the fourth Donegal man to win a Scottish Cup medal.
The others are the Milford born Patsy Gallacher, Carl’s fellow Rosses man Packie Bonner and the most recent Conrad Logan. Patsy Gallacher won four and Packie Bonner three, with Conrad Logan just the one.