One goal enough for Harps 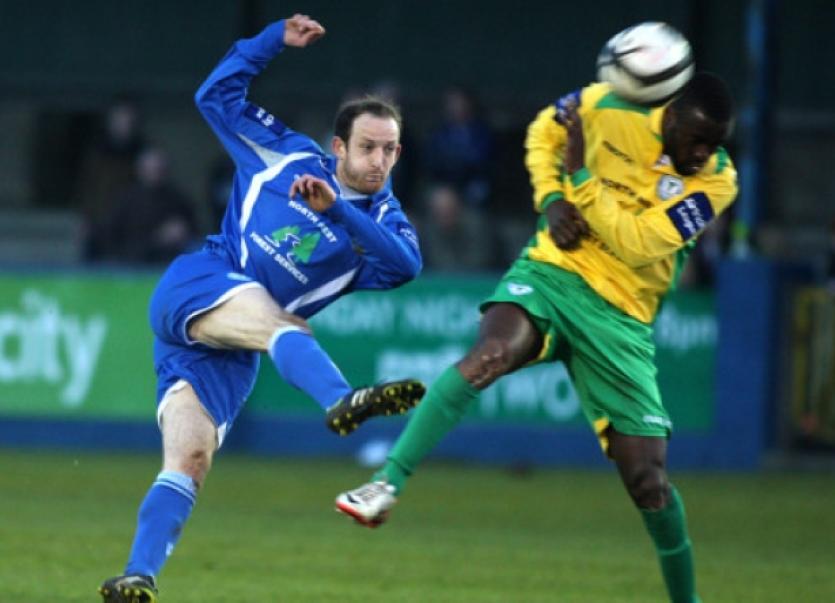 The Barclay’s Premier League trophy and the Community Shield were on display at Finn Park on Friday night but at least the local support left happy on matters closer to home having seen Finn Harps get back to winning ways with a narrow win over 10-man Salthill Devon.

The Donegal branch of the Manchester City Supporter’s Club had taken the silverware down Navenny Street at half-time.

The silverware and the flashing cameras might’ve been the sole topic they opened their post-match assessments with in the Twin Towns’ various watering holes afterwards. It was the highpoint at that particular juncture.

However, Thomas McMonagle half-volleyed the only goal of the match nine minutes into the second half to give that same support a spring in their step. It was his third goal of the season.

The centre-half steered the ball over James Keane when Damien McNulty had headed a free-kick from Thomas McBride into the danger area and Keith Cowan had missed with an acrobatic effort.

Last week at Lisseywollen, Harps manager Peter Hutton said there was too much negativity being placed on his young team after a couple of indifferent results – namely, a scoreless home draw with Wexford Youths followed by a 1-0 loss away to Athlone Town.

Hutton made the point that such criticism, of what is essentially a work in progress, was a little harsh and provided unnecessary detriment to his team.

A 1-0 win over a struggling Salthill mightn’t force to glass-half-empty brigade into a radical overhaul of their thoughts but it’s a result the Harps manager will be content with and one that Harps can gain traction from.

Harps were seldom under serious pressure but one-goal leads are generally precarious ones.

A minute from time the visitors were reduced to 10 when Jakub Tomanica was given a straight red for raising his hands on Michael Funston, who hit the deck.

The visiting Galwegians had picked up just two points from six outings this term but Mannion’s team, playing a 4-5-1 with Jean Biansumba at its head. They were set up to defend.

They also wore Harps’ green and gold away kit after the match referee Alan Sherlock deemed there was a clash of colours beforehand.

Before McMonagle scored the last time Harps had dirtied a sheet was 253 minutes beforehand, away to Mervue on March’s last Friday.

McMonagle, who was one of five changes from the Harps team that lost in Athlone, came as close as anyone to a first half goal when he improvised to hook over his own head only for Keane to tap over.

Cowan, from the resultant corner from McBride, couldn’t keep his header down. Marc Brolly’s corner was then met by McNulty but Robbie Gaul cleared off the Salthill goalline.

Their policy was containment was certainly protruding the entertainment levels but Gaul, having done so well to ensure parity remained, puffed a sigh of relief late in the half.

The right-back, completely unchallenged, headed inches wide of his own far post with Keane on a different wavelength.

McMonagle, who reportedly broke a bone in his foot against Mervue in the last match in which Harps had scored, only to learn afterwards there was a misdiagnosis, returned with a goal.

Kevin McHugh passed up a decent chance for a second when he drove over when put into space by Ciaran Coll. The approach play was perfect but the finish from McHugh wasn’t low enough.

A 2-0 lead would’ve almost certainly put the issue to bed but Salthill justifiably possessed a belief they could scrape a third draw of the campaign late in the game.

Harps were a little nervy as time began to thin and Derek O’Brien went close twice for Salthill when he drove into the Harps side-netting and then over the crossbar.

However, Harps’ 21-year-old goalkeeper Ciaran Gallagher, who was making his 100th first team appearance for the Ballybofey side, will have more trying days at the office.

The Raphoe native hadn’t a save to make all evening and the 687 in attendance will hope to see Harps build on the win on Friday when they’re on home turf again. Waterford United will provide the opposition.