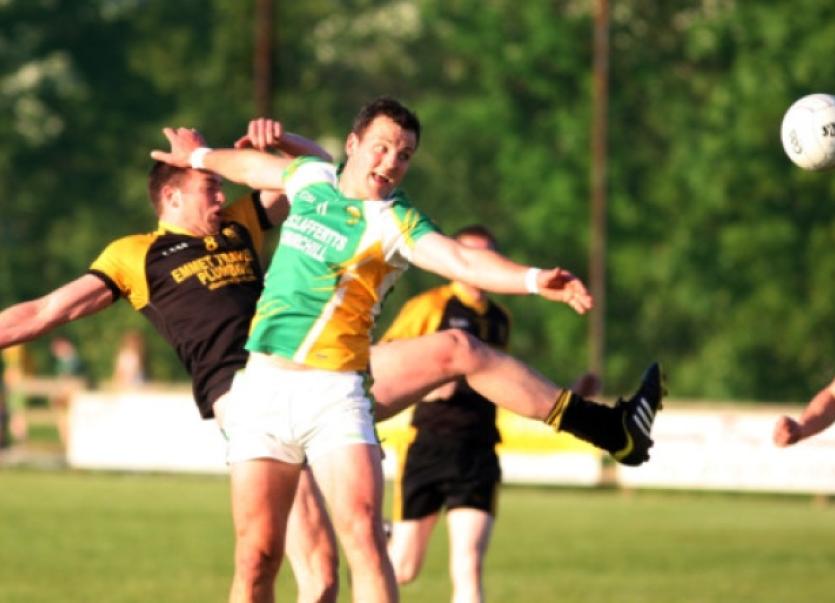 The loudest cheer was reserved for substitute Colin Kelly’s 60th minute point for Glenswilly while Neil Gallagher’s knee injury which forced him off at half-time was the only other point of note in a one-sided encounter.

The loudest cheer was reserved for substitute Colin Kelly’s 60th minute point for Glenswilly while Neil Gallagher’s knee injury which forced him off at half-time was the only other point of note in a one-sided encounter.

The game as a contest was almost over before it began with Ciaran Bonner tearing through the middle inside 10 seconds. His effort was blocked by Ashley Mulhern, but Brian Farrelly knocked the rebound back across goal and Michael Murphy had the ball in the net.

It was obvious from that point that there was going to be no repeat of the Bundoran heroics against St. Michael’s.

By half-time the Gary McFadden powered Glen men were 2-5 to 0-2 ahead and the margin didn’t flatter them.

However, there were worries about the fitness of Neil Gallagher, who seemed to pick up a knee injury early in the half and he was replaced at the break, sporting an ice pack on his knee.

The other talking point was around the inclusion of Ciaran Bonner, who picked up a straight red card in Towney, but somewhere between Towney on Sunday and Glen on Saturday, the straight red became two yellows. There was an 11th hour hearing on the issue at 6 p.m. on Saturday evening, 90 minutes before throw-in which cleared Bonner to play. How Bundoran would have wished he were not there in the opening seconds.

The Seasiders were limited to two Christy Keaney frees in the opening half in the 4th and 29th minutes. In between Keaney was wide with three more, while Ashley Mulhern denied Neil Gallagher and Michael Murphy with first class saves.

Big Neil finally added the second goal after a great break from Gary McFadden in the 26th minute while ‘Copper’, Leon Kelly, Caolan Kelly and Michael Murphy with two were the Glen point scorers.

Bundoran did have one goal chance when James Keaney powered through on five minutes but Philip O’Donnell made a great stop at the expense of a ‘45’.

Bundoran did improve somewhat in the second half with Shane McGowan hitting two great points and Tommy Hourihane adding two frees, but Michael Murphy was also keeping the Glen side of the scoreboard ticking.

The final nail was hammered home by Cathal Gallagher (who replaced his brother at half-time) finishing a move which involved Ciaran Bonner and Brian Farrelly on 40 minutes.

After that the game drew to its inevitable conclusion. Gary Clancy, Adam Coyne and Tommy Hourihane added points for respectively but Gary McFadden hit a couple of delightful scores with left and right while Leon Kelly, Darren McGinley and finally the comeback kid Colin Kelly brought the curtain down on an easy victory.

The win puts Glenswilly back in the race to make the quarter-finals with their final day group outing at the Bridge, Dunfanaghy, probably a group decider.

Apart from the excellent Gary McFadden, Caolan Kelly, Ryan Hunter, Ciaran Bonner, Keelan McFadden and Brian Farrelly were excellent while Michael Murphy was able to bring his great range of skills to the encounter.

For Bundoran, James Keaney was lively in the opening half, although he had to retire injured in the second. Shane McGowan, Peter McGonigle, Ciaran McCaughey (who heads back to the US this week) and Tommy Hourihane were best.

Goals by Gerard McGrenra and Oisin Crawford either of side of half-time were the highlights of a very easy victory for Glenswilly, who led 1-8 to 0-1 at the interval.