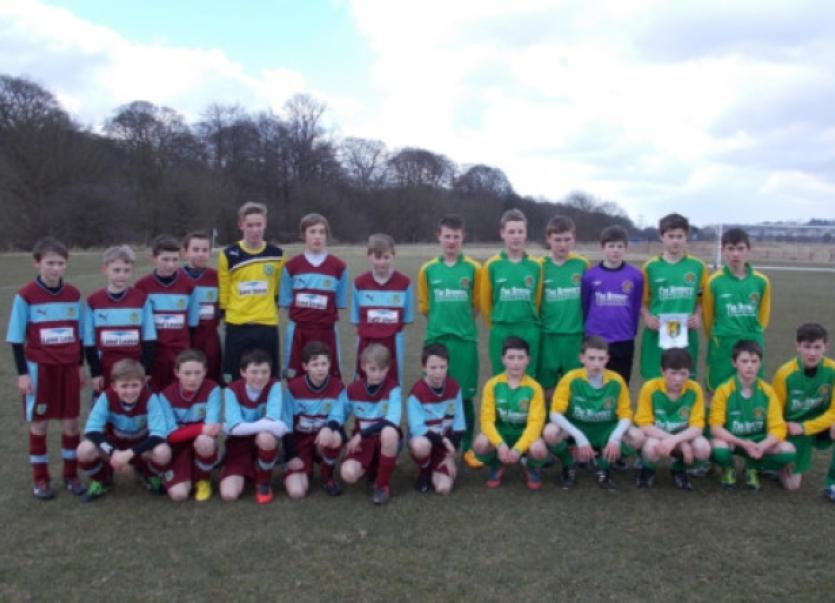 The Donegal U-14 squad enjoyed a fruitful trip to England over the Easter holidays and were more than match for illustrious opponents.

The Donegal U-14 squad enjoyed a fruitful trip to England over the Easter holidays and were more than match for illustrious opponents.

Donegal opened with a 3-1 win against Burnley at the Lancashire club’s Gawthorpe training ground. Donegal went ahead when Sean McBride played a great ball through to Jordan Ryan who finished well.

Donegal scored again early in second half when Shaun Curran crossed in a for striker McBride to meet first time on the volley from 12 yards out and finish expertly. Shane McNamee finished well to see out the game.

A 2-1 win over Bury FC followed at Blackley Manchester.

Donegal took a 2-0 lead when Jack Keaney released Calvin O’Brien. He drove a low cross into the box that Sean McBride met 18 yards out to hit an unstoppable shot past the keeper.

Next up, Blackburn Rovers and a 1-1 at the Brockhall complex.

Blackburn took the lead through an excellent passage of play.

This lead lasted two minutes when Dan O’Gallagher met at the back post with a half volley into the top corner.

Last up for Donegal was a 1-1 draw against Manchester United at the excellent Carringon facility.

Donegal hit the crossbar with a thunderous shot from striker Sean McBride but fell behind on 20 minutes.

The movement of striking partners Sean McBride and Ryan were causing the United back line all sorts of problems with the midfield quartet of Peadar Mogan, Shane Blaney, Jeaic McKelvey and Calvin O’Brien providing the service, Sean McBride received the ball outside the box from Shane Blaney and he advanced into the box and smacked of the post.

Jordan Ryan was also working well and made the keeper produce some fine saves.

The game then saw each side pushing hard for a winner to no avail and the game finished 1-1.

This tour in general was a great playing and life experience for this year’s Kennedy cup squad and one they will never forget as visiting all these excellent first team facilities will show them what they can achieve with a lot of work, dedication and natural talent.

The lads now continue preparations over the next nine weeks for the Kennedy cup in Limerick from the 10th to the 15th of June.