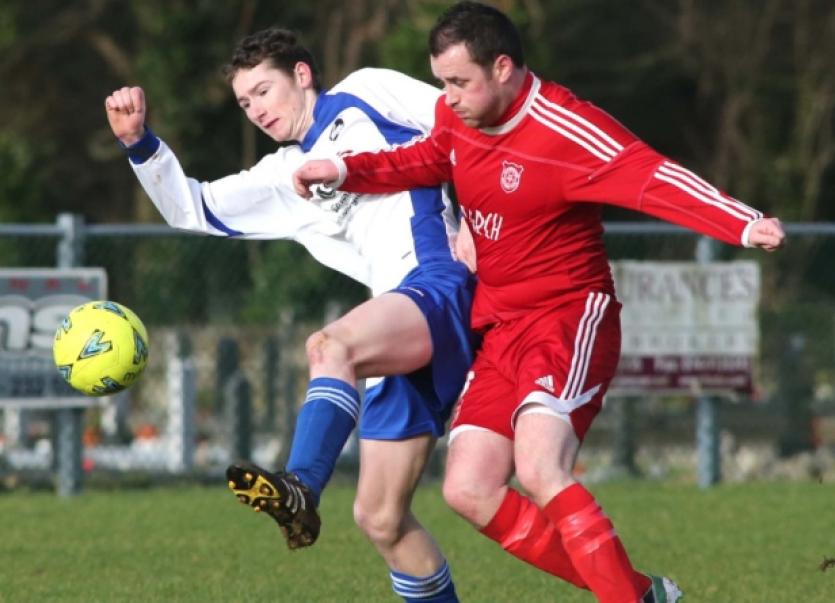 A Chris Porter strike midway through the first half was enough for Gweedore Celtic to see off Redcastle FC.

A strong crossfield wind made conditions difficult but credit to both teams for serving up a good game of football.

The home team should have been ahead as early as the first minute but Brendan Mc Geady scooped over from a yard out.

McGeady turned provider on 25 minutes when his cross wasn’t cleared and Porter hit a great shot into the roof of the net.

The home team were well on top for the rest of the half but could not extend the lead.

The second half was a more even affair. Michael McKelvey did well to block a good shot from a Redcastle forward and shortly after Cathal Campbell cleared off the line.

As Redcastle pushed for an equaliser Gweedore were content to counter-attack with chances falling for Jamie Boyle, Declan Doherty and Tommy Diver.

Diver must wonder how he failed to register on the score sheet with a number of great chances.

Milford have enjoyed recent success in this competition, winning the Cup in 2012, and on this display they could be a good bet for the 2014 laurels.

A strong swirling breeze didn’t make for pretty football but Milford handled the conditions well once they settled down.

Gary Merritt showed early on that he was up for this game as he caused trouble for the visiting defence on numerous occasions in the opening exchanges. It was no surprise that he was the scorer when Milford took the lead just before the interval.

His well placed shot gave Seamus Houghton no chance in the Carndonagh goal.

The Inishowen side enjoyed their best spell at the start of the second half and in this period they found an equalising goal when Ronan Doherty fired home the rebound after Donacha Gallagher’s shot was parried out by Caolan Mc Gettigan in the home net.

This was to be the visitor’s only goal as Milford controlled the match until the finish. They scored their winner from the penalty spot after Gary Merritt had been fouled by Cathal Doherty in the penalty area.

Mark Flood made no mistake from 12 yards.

Lifford Celtic made a winning trip to Dunree United on Sunday for an Ulster Junior Cup match against the local side.

The game was scoreless at the interval but the Donegal Junior League side went on to claim a worthwhile victory. Goals from Stuart Carlin and Jonny Robb gave the Greenbrae men a comfortable second half lead.

Dunree United did muster a late reply but their single goal wasn’t enough.

Gweedore United took full advantage of their floodlighting system on Saturday night when they hosted and beat fellow Donegal Junior League side, Rathmullan Celtic, in the Ulster Junior Cup.

Played in front of a sizeable attendance this was a pulsating affair from start to finish.

The visitors took the lead on 40 minutes when Niall Doherty sprung the Gweedore United off-side trap and finished heatedly past the home custodian Liam McFadden.

Hit by that late opening half strike Gweedore United didn’t allow the scoreline to deflate their ambitions.

They emerged for the second half with all guns blazing. On fifty minutes Shane O’ Donnell levelled the scores when he curled a twenty five yard free-kick around the Rathmullan Celtic defensive wall beyond the reach of Shay Coyle in the visitors’ net.

On 63 minutes the home team went in front.

Lee Ferry sent his right wing free-kick towards Coyle’s near hand post but before the ball could get to the waiting arms of the Rathmullan keeper Michael Connolly dived at full length to steer the ball into the net with his head.

This goal was met with much applause by the Gweedore followers in the crowd and set up an exciting finish.

Rathmullan equalised on eighty one minutes when Kevin Mc Carry bursts through the United defence and fired home.

With neither team able to add to the scoreline during extra-time it went to penalties. Gweedore United prevailed by five goals to four.

This match played in terrible weather conditions saw the Aileach advance to the next round of the shield following a tight encounter at Gweedore Celtic.

Both sides had chances in the first half however Aileach broke the deadlock in the 32nd minute when Dermot Mc Glynn scored a good free kick from 25 yards.

United had plenty of chances to equalise through Eoin Doohan, John Mc Fadden and Brian Gallagher however the Aileach keeper did well on each occasion and the score remained 1-0 until half time.

In the 65th minute United got back on level terms when Stephen O’ Donnell finished well from close range following a good pass from Martin Doohan.

Aileach were only behind for five minutes when they scored the winner through Liam Burke, a good individual effort. Good efforts for both sides in extremely poor weather conditions.

Kerrykeel recorded a fine win over Lagan Harps on Sunday in windswept conditions.

Both teams started well with Kevin Diver going close for Lagan and Fergal Friel for the ‘71.  The deadlock was broken on twenty one minutes when Johnny Nanny scored from close range after a Seimie Coshia cross.  On the stroke of half time Lagan thought they had drawn level when a long range free from the halfway line was headed towards goal by Brian Kelly only for Mark Mc Conigley to pull off an outstanding save.  Marty Mc Ateer hit the post for the homeside on forty six minutes from a free kick on the edge of the box.  Lagan kept pushing and again Kerrykeel had keeper Mark Mc Conigley to thank with another brilliant save.

Kerrykeel hit Lagan on the counter attack and made it two on seventy three minutes when Marty Mc Ateer split the Lagan defence with a great ball and Johnny Nanny played in his brother Sparky to drill home.

The points were made safe on eighty two minutes, this time Fergal Friel heading home a Kevin Loughrey cross.