‘Jiggerless’ Donegal fall to pieces in second half 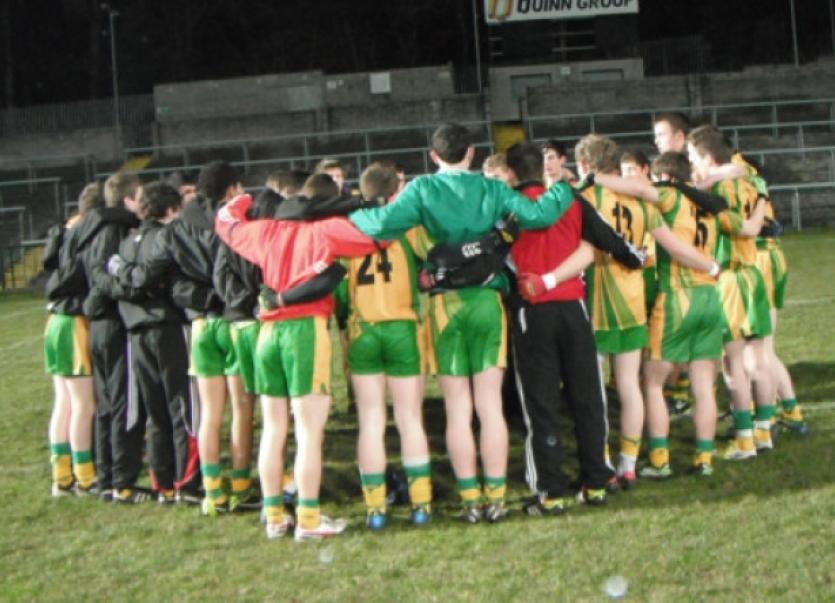 Donegal minors looked home and hosed at half-time in the Ulster Minor League against Fermanagh in Brewster Park on Tuesday night, but they suffered in the second half as Fermanagh came from seven points down to clinch a deserved victory.

Donegal minors looked home and hosed at half-time in the Ulster Minor League against Fermanagh in Brewster Park on Tuesday night, but they suffered in the second half as Fermanagh came from seven points down to clinch a deserved victory.

Donegal led 0-8 to 0-1 at the break and the lead did not flatter them as Fermanagh looked rudderless and Donegal were pretty good. The management decided to replace Darach ‘Jigger’ O’Connor, as he was also part of the Donegal U-21 panel for the Ulster championship game with Tyrone the following night.

However, Fermanagh were a completely different team in the second half with Colin Logan at midfield and Paul Coulter at wing half-back dominating. The Maguire men won nearly every kick-out and every break and corner forward Kevin Curran came into his own. They did so despite losing full-forward Sean Keenan, who looked the only Fermanagh player likely to trouble Donegal.

Fermanagh won the second half 0-10 to 0-1 and even accounting for Donegal failing to take chances from play and frees in the closing stages, the home side deserved the win for their industry and refusing to throw in the towel.

It was one-way traffic in the opening half with Darach O’Connor creating havoc and Jamie Brennan on form, firing three points inside 16 minutes. Conor McCormack, Conor Harkin and Daire McDaid (free) had points as Donegal led by 0-6 to 0-1.

Before half-time Darach O’Connor converted two frees with Fermanagh almost getting a goal on the stroke of half-time as ‘keeper David Tyrell misjudged a high ball and Conor Durnien flicked just wide.

The Donegal goal had another lucky escape seconds into the second half but Fermanagh got quickly into their new found stride with points from corner back Cain McManus, Kevin Curran and Paul Coulter, hitting the first of three points with the outside of his right.

Paul Ward reduced the lead to three on 46 minutes and by the 54th minute further scores from Durnien and Kevin Curran were followed by a spectacular equaliser from Coulter with six minutes left.

Lorcan Connor had Donegal’s only point of the half to edge his side in front with five left but a mistake by Conor McCormack was punished by Conor McCauley to level matter once more.

Conor Harkin was wide from a 35m free on 60 minutes before Cian Mulligan tore through the Fermanagh defence but saw his shot come back of the angle of post and crossbar.

The let-off was punished when Paul Ward edged Fermanagh ahead in the second minute of added time and from the kick-out Paul Coulter added his third point of the half to seal the victory.

To say it was a game of two halves would be the understatement of the year. Everything was going Donegal’s way in the opening half with Jack Scally and Aidan Sweeney impressing in defence while Jamie Brennan and Darach O’Connor were dominating up front.

But in the second half, the tide turned and they just couldn’t find the answer.

The Fermanagh side on Tuesday night had three members of the Erne Gaels, Belleek, club, all of whom played their part in the victory - Paul Ward, Jack McCann and Shane Mimna.

Donegal manager, Stephen Friel, like most people present, found it difficult to explain the Donegal second half performance.

“In days like this, maybe you learn more about yourselves in defeat than you do in victory. These are young players; there’s no cups given out today. We made a few bad decisions near the end going for goal; we turned over a very bad ball at the end.

“All credit to Fermanagh. They were very good in the second half. Momentum is such a big thing for players at this age. As good as we were in the first half, we have to learn from the second half. No question about it, today was a huge learning curve for us,” said Friel, who was not making any excuses for being without players due injury.

“Anyone we put out, we consider a county footballer and I’m not going to make excuses. We sent out a team that were good enough to win. We were winning 8-1 at half-time and to come off the field with a defeat is a bitter pill. Even when we went one ahead, we had chances to kill out the game,” said Friel, who said that all the warnings were given to them at half-time.

“But unfortunately, they got their dander up and there was good home support for them. Momentum is such a huge thing in sport and we simply couldn’t get the ball. We were really outgunned at midfield with their No. 8 having an outstanding. They were the hungrier team and we have to learn from that, put it behind us and move on.”