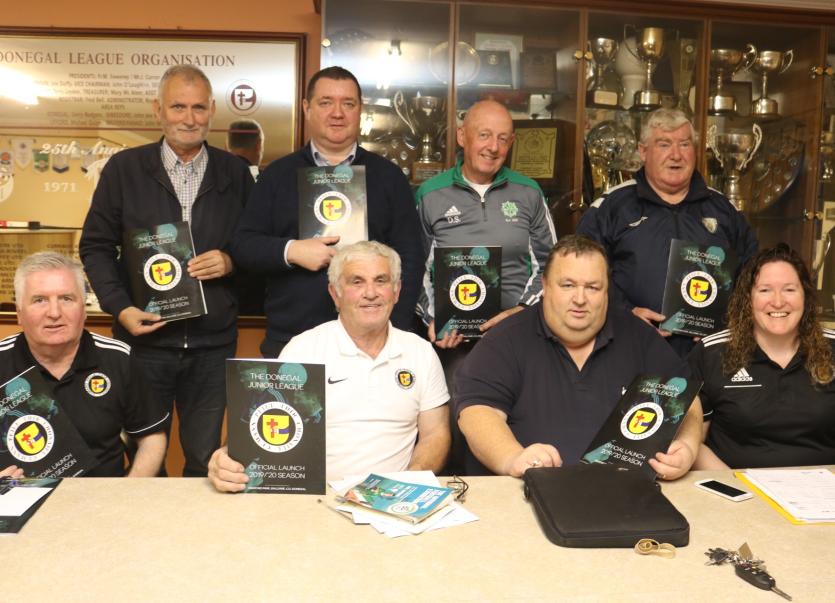 Club delegates from across the county gathered at Donegal League headquarters at Diamond Park in Ballyare on Wednesday evening for the official launch of the new season.

Some of the sponsors of the various leagues and cup competitions were also in attendance as the league’s executive formally launched the 49th season of the league.

Next year, the Donegal League will mark its 50th anniversary and plans are already in place for the golden celebrations.

League PRO Gary Foy, who has put together a superb league directory ahead of the new season, welcomed all those present to the launch.

He said it was the third year that the executive have organised such an event and it allowed the clubs to meet up with each other, as well as the sponsors and members of the media. Some of those who attended Wednesday night's launch at Ballyare

He offered words of sympathy to the Crossan family on the sad passing of Theo Crossan in Buncrana recently. The Crossans,, through the Orchard Inn and Voodoo Venue, have been long time supporters of the Donegal League.

Fixtures Secretary Christina O’Donnell also addressed the launch and she gave a brief run-down on the number of teams competing and the number of clubs who are now members of the league.

She welcomed Swilly Rovers who have joined the Donegal League and will be playing in Division Two of the Sunday League this year. The executive, she noted, will again do their best to run the league in an efficient manner this season. She said that while some clubs might always be happy with some of the decisions taken, the executive members were there to enforce the rules set down by the clubs.

The league got up and running recently with the opening series of games in the Brian McCormick Sports Cup. The first round of league fixtures in the Sunday divisions will be played next weekend.

The draw was also made at Wednesday night’s launch for the opening round of the Voodoo Venue Cup.