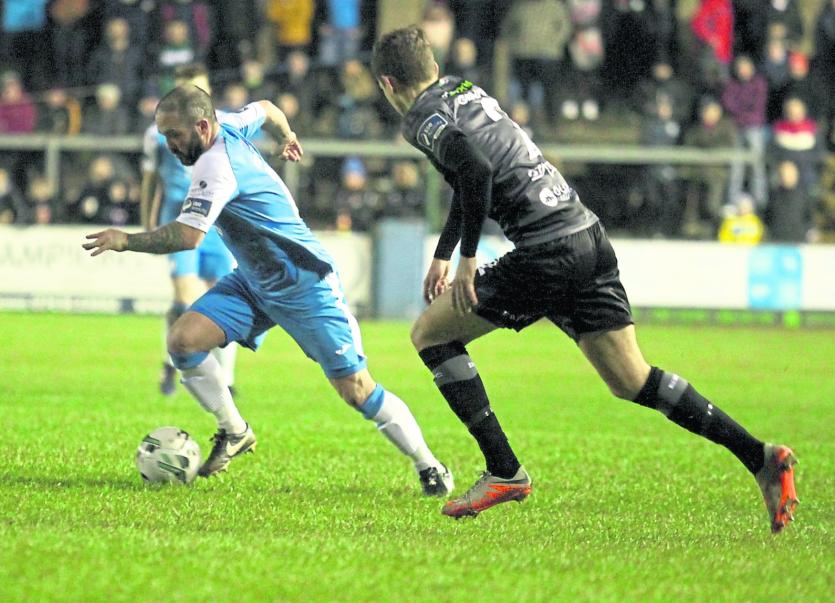 Former Sligo player Raffaele Cretaro, seen here against Dundalk, is likely to feature for Harps against his former club in Friday’s north-west derby

Sligo Rovers have scored 23 goals in their last six outings - and that is surely a warning for FInn Harps as they make the short trip to the Showgrounds for Friday’s north-west derby.
Admittedly, 14 of those goals came against Limerick (First Division) and Glebe North (Non-league) in the FAI Cup, but the bottom line is that the Liam Buckley managed side appear to have hit a bit of form.
However, given that they are safe in mid-table and effectively out of the race for any European spot, they may be throwing their eggs into the cup basket having reached the last four.
At least, that is what Harps will be hoping as they go into a game hoping to get a result that can give them more daylight over bottom side UCD and take them a step closer to ensuring a relegation play-off position, at worst.
But Horgan will play down any notion that Sligo will take the foot off the pedal. Sligo want momentum in their bid for cup glory.
“Their front two, Ronan Coughlan and Romeo Parkes, have been brilliant. When they were not going well, they kept them in it. They have been banging in the goals recently. Sligo are a handful and we will have our work cut out,” he told the Democrat.
“But maybe the good thing is that games between us are usually fairly tight and hopefully we can get something out of it,” he said.
Harps have won away from home only once in the Premier campaign, and have drawn three times with ten other journeys from Finn Park ending in defeat, so even a point will be interpreted as a positive outcome.
Since Sligo lost 2-0 to Harps in Ballybofey at the end of June, the Bit o’ Red have had two league wins, a 5-1 home success over UCD, and a 4-2 victory in Cork. They have drawn with Shamrock Rovers, Waterford and Bohemians, and have lost against St. Patrick’s Athletic and Dundalk.
In the FAI Cup, they have been enjoying a goals bonanza, with last weekend’s 4-0 win over UCD in the quarter-finals being their latest triumph.
Horgan is expected to tinker slightly with the side that lost to St. Patrick’s Athletic last Friday and former Rovers’ player Raffaele Cretaro may well get more than the 20 minutes last time out. Niall Logue is out having picked up an injury against the Saints. Rovers’ Johnny Dunleavy, who is from Ballybofey, remains out with an Achilles problem
In the three previous league s this season, both sides have chalked up one success with the other game being a 1-1 draw.
Meanwhile, Sligo will know who they will play in the semi-finals of the extra.ie FAI Cup this morning when the draw for the semi-finals is made. Also in the hat are Dundalk and Shamrock Rovers while the other place will be filled by the winners of Monday’s remaining quarter-final tie between Crumlin United and Bohemians.