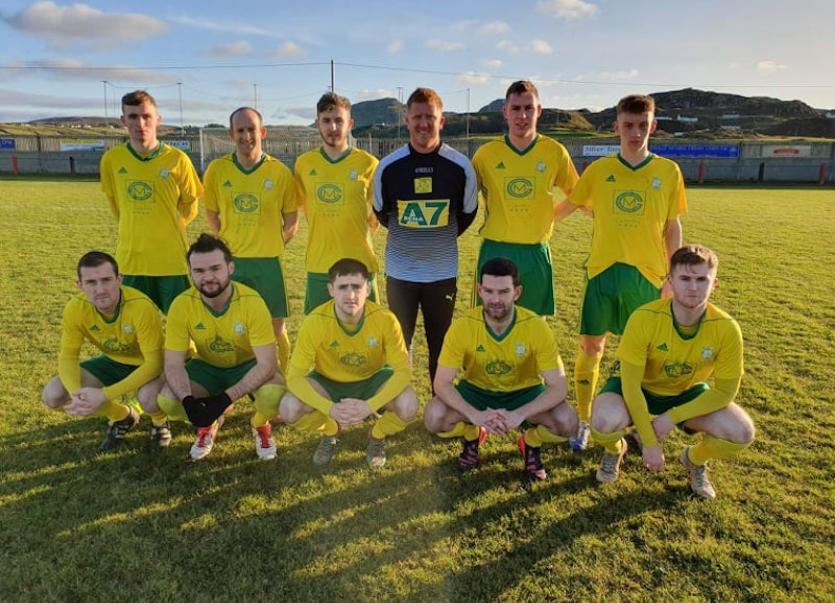 Bonagee United are on top, but Finn Harps Reserves, Cockhill Celtic and Letterkenny Rovers are just behind them.

Letterkenny Rovers and Cockhill Celtic are still unbeaten in this season’s bmcsports.ie Ulster Senior League but it is Rovers who may well regret not converting a number of good chances as they were forced to settle for a 0-0 draw against the reigning champions at Leckview Park on Sunday.

Rovers dominated the proceedings for long periods and one wonders what impact their inability to convert a number of clearcut chances will have come the season’s end.

Cockhill drew with Midleton last week in the Intermediate Cup and have a long trip south next week for the replay and maybe a trip to old foes Rovers was not the ideal match for Gavin Cullen’s men and it was Rovers who took the game to their visitors from the off.

BJ Banda fired wide on seven minutes before Dan O'Donnell’s header clipped off the top side of the bar on eight minutes as Rovers threatened early.

The first real chance of the game came on 15 minutes when Jonny Bonner sent Banda away before the ball eventually broke to Kevin McGrath and he somehow fired narrowly wide from 12 yards out with the goal at his mercy.

Rovers were well in the ascendancy - although Jimmy Bradley fired just one wide for Cockhill on 22 - and Dan O'Donnell flashed one wide from a well delivered Bonner corner on 23 minutes.

A Bonner shot was spilled by Gavin Cullen in the Cockhill goal before the ball fell to Banda and he was denied by a challenge from Peter Doherty, although the Rovers contingent thought he may have brought down illegally but match referee Garvan Taggart was nonplussed with the protestations.

Gary Merritt headed just wide before Banda ought to have scored but somehow headed over from point blank range after a teasing cross from Gary Merritt on 39.

Cullen then had to be alert to snuff out an effort from Banda just when he was about to shoot on 42 minutes.

The second half started in the same vein as the first but chances were at a premium with a well whipped Merritt free on the hour mark the closest either side came to scoring before Matty Harkin just failed to get on the end of a McGrath effort across goal on 66.

The game’s main talking point arrived on 69 minutes when Lee Toland’s cross found McGrath and he headed home only for his effort to be ruled offside by the assistant referee.

Cockhill were always going to have a period of dominance and they started to get a control of things with Bradley firing just wide on 72 before Daniel Martin Doherty’s cross was sliced just wide of his own net by retreating Rovers defender Dan O'Donnell.

Peter Doherty then was left unmarked in the box only to head straight at home goalkeeper Rory Kelly on 74 while sub Lawrence Toland’s free kick was also well gathered by Kelly as Cockhill looked to sneak a late winner.

One suspects Cockhill boss Gavin Cullen will be the happier of the two managers with the point and they now look forward to their trip to Cork next weekend while Letterkenny are back at Leckview when they face Fanad in the Knockalla Cup quarter finals.

Fanad United and Bonagee United played out a highly entertaining 3 all draw at Traigh-a-Loch on Sunday afternoon.

The game was played in ideal conditions and both teams attacked from the start.

In the 13th minute Garbhan Grant found space in the Fanad box but his weak shot was easily saved by Caolan Bolton.

The game was end to end and Bonagee opened the scoring in the 25th minute. After some good work down the right, Michael Funston hit a low cross into the box which was met by Michael Doherty who slotted home at the near post.

The lead lasted 10 minutes as Fanad hit back. Mathew McLaughlin hit a long free into the box which was knocked down by Edward O'Reilly and the bouncing ball was headed into the net by Martin McElhinney. Bonagee had a few chances to equalise before the break.

Garbhan Grant's cross to the back post was met by Ryan Rainey who headed wide.

Five minutes before the break, Matthew McLaughlin done well to block a Michael Funston shot on the line.

With time almost up in the half, Fanad too the lead. Martin McElhinney found space out on the right and his curling cross was met by Dean McCarry who powered his header home.

With five minutes gone in the second half, Peter Carr found himself in space in the Fanad box but he dragged his shot wide.

In the 65th minute Brian McVeigh led a fine break out form the back for Fanad, his inch perfect pass found Matthew McLaughlin but agonisingly for him his shot found the side netting.

Fanad pushed after that but were caught out on the break with 15 minutes to go. A ball out form the back was latched onto by Garbhan Grant who lofted the ball over Caolan Bolton to find the net despite the best efforts of Conor Duggan.

With five minutes remaining Fanad missed a gilt edged chance to get an equaliser when Oisin Langan headed over the bar from a Conor Blaney cross.

However on the final minute Fanad got the equaliser they will feel their performance deserved.

When Matthew McLaughlin sent over a corner, Dean McCarry seen his header well saved by Eugene Ferry but Edward O'Reilly was the quickest to react to the breaking ball to score from six yards out.

In a game which was rearranged to the Brandywell, Harps took all three points for the second time over their North West rivals this season.

Harps went two up early on with strikes from Ronan Gallagher and Corey McBride.

Derry got one back before Gallagher netted his second and Harps third to go in at half time 3-1 up.

Harps gained full control of the second half and went further ahead through Gabriel Aduaka before Derry got their second goal of the game.

Harps got their fifth and secured the three points when Gallagher netted his hat trick and complete a good days work for the Donegal men.

Harps climb the table yet again after this victory and they now look to next Friday night when they take on Bonagee United in in the Knockalla Caravans Cup Quarter Final.