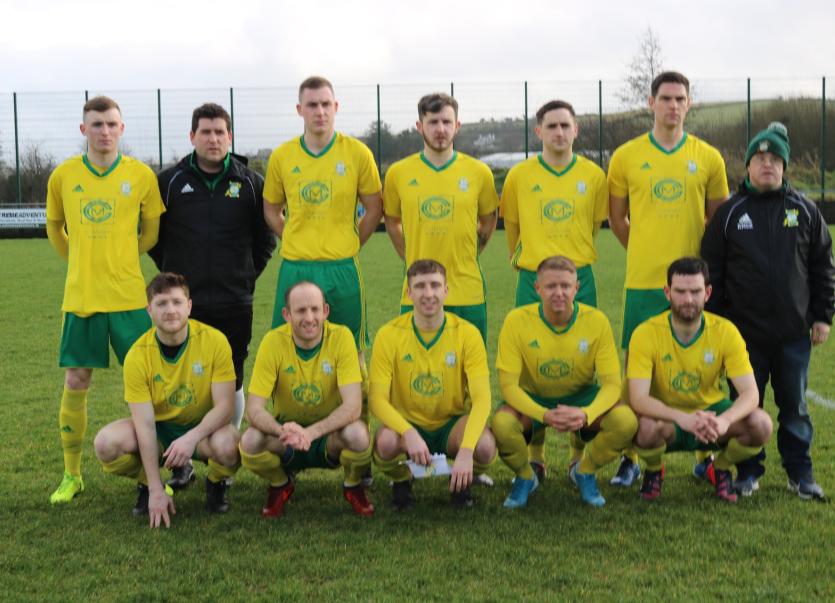 The Bonagee United side who played College Corinthians in the FAI Intermediate Cup. PICTURES: STEPHEN DOHERTY

Bonagee United were given a harsh lesson in the old art of converting chances as their FAI Intermediate Cup hopes evaporated at Dry Arch Park on Sunday afternoon.

With Bonagee having the better of the chances in the early stages, the USL challengers were rocked to the core when College Corinthians nipped two goals within a minute around the half-hour that killed the game.

The lead arrived on 30 minutes when a ball over the top caught Bonagee’s rearguard unawares and Evan Galvin nipped in to fire across Eugene Ferry and into the far corner.

With Bonagee hardly having time to shake their heads clear, the ball was in their net for a second time. Less than a minute after conceding the first, Jason Gibson’s men leaked another as Daragh O’Sullivan-Connell’s low shot from 25 yards crept past the stunned Ferry to the bottom corner.

From a position of seeming superiority, all of a sudden Bonagee found themselves 2-0 down and staring into the abyss.

Michéal Doherty saw an eighth minute penalty beaten away by Shane Sherlock, the visiting goalkeeper, after the Bonagee forward had his heels clipped by Killian O’Brien.

Doherty engineered the corner from which the penalty was ultimately won after weaving into the area having been played in by Jamie Lynagh.

It was Lynagh, Bonagee’s captain, who teed up a big chance in the 21st minute as a deep cross invited the shot from Deano Larkin, but his shot was over the crossbar.

Doherty had a big chance six minutes later, but the lively attacker steered wide from a glorious position after being picked out by Ryan Rainey’s probing ball. Driving intently at the Corinthians rearguard, Rainey’s diagonal delivery looked set to assist the breakthrough, but Bonagee were left cursing their profligacy once more.

They soon paid as, first Galvin and then O’Sullivan-Connell had Corinthians with a firm command.

Bonagee attempted to summons a response, but Emmet Friel shot low into Sherlock’s hands and Larkin blazed over after Rainey made another telling incision.

Twenty minutes from the end, Evan Browne had a chance to round the afternoon off, but he riffled over from a good position. Earlier in the half. Packie Mailey had to be alert to cut out an opening for Ian Mylod.

When Sherlock could only palm down Doherty’s probing ball, intended for Rainey in the area, there was a moment of panic. Rainey went to ground, the attendance looked at Eugene Derring, the referee, but any faint hopes of a second spot-kick were sternly waved away.

Rainey fashioned a good chance with the clock ticking, but the former Wolverhampton Wanderers prospect shot off target.

Doherty lobbed to the net in the closing stages, but the offside flag was up, while Lynagh rattled the outside of the post as Bonagee’s luck was summed up.