Disappointment for Ollie Horgan's side against ten man visitors 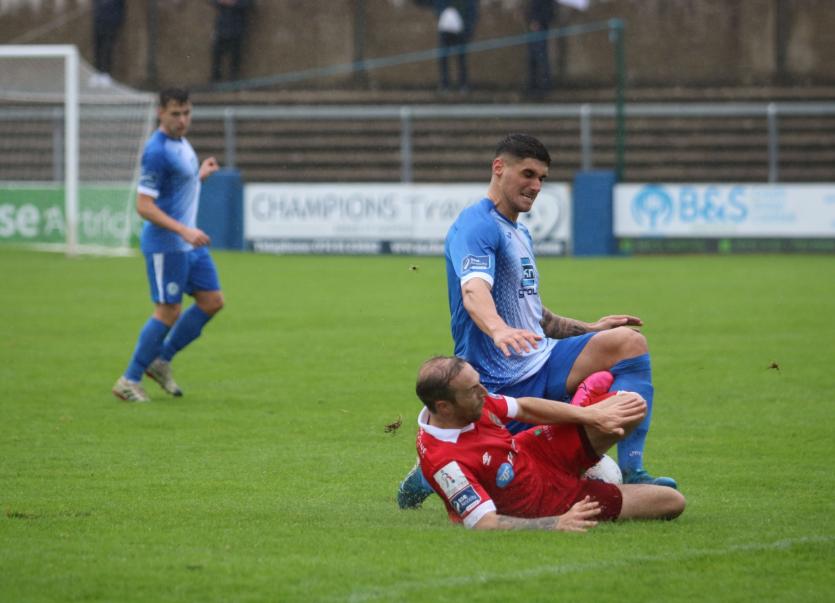 The incident that led to the sending off of Karl Sheppard. Photo: Stephen Doherty

Shelbourne became the latest side to enjoy an away day victory - but they had to do it the hard way with ten men after Karl Sheppard saw red early on.

Ryan Brennan bagged the only goal of the game at a damp Finn Park in the 30th minute, and the visitors deserved their interval lead.

Battling Finn Harps threw everything at Shels in an absorbing second half, but just could not unlock the stubborn reds defence.

This result lifts the Dublin side to joint fourth in the table while Harps remain third from bottom, a point ahead of Sligo Rovers and Cork City.

Only one side has won a home game in the two divisions since the League of Ireland resumed, effectively behind closed doors.

Both sides went into this clash on the back of defeats at the weekend, Harps having lost 3-1 away to Shamrock Rovers while Shels had gone down 1-0 at Tolka Park against Waterford.

The opening spell saw both sides settling and adjusting to the very wet, slippery underfoot conditions.

A long-range speculative effort from Mark Coyle was the pick of the early crop, but Shels then found themselves down to ten men with just over 11 minutes on the clock as Sheppard was shown a straight red card for a stern challenge near the touch-line on Kosovar Sadiki.

Shels grabbed the lead on the half hour when Alex O’Hanlon sent in a decent cross and Ryan Brennan - who had found space of social distancing proportions  - headed past a despairing Mark Anthony McGinley.

Indeed, as so often happens, the numerically disadvantaged team seemed to find a pep in their step and Ian Morris was certainly the happier of the managers as the comments bellowed out from the dug-outs beneath the echo-filled main stand.

Shels could well have doubled their tally in the 38th minute as Aaron Dobbs cut through the home defence from the right and unleashed a cracking shot that wasn’t far off the target.

On a rare attack, Mark Russell lobbed in a probing ball which was met by Austrian striker Alex Kogler but his header had little power and Colin McCabe gathered easily.

Harps supremo Ollie Horgan shuffled the pack for the second half, changing from a 3-5-2 to a 4-4-2 formation while Tony McNamee, brought on at the end of the first half, and Adrian Delap added some more zest to the midfield.

Harps conjured up their best move to date on 57 minutes when Shane McEleney found Mark Russell who whipped in a cross aimed at Karl O’Sullivan but defender Dan Byrne reacted well to intervene just in time.

Karl O’Sullivan darted into the area to force McCabe into making a fine save, McNamee then fired over and Sadiki put a well hit effort wide.

Harps brought on teenage striker Jamie Browne for the final ten minutes, but it was the Drumcondra based side who went closest to scoring again.

Shels could have got a second when Deegan released Georgie Poynton down the right flank, but although he got into the box his shot from a narrow angle whizzed across the face of goal.

In stoppage time, Shels had a real let-off when defender Dan O'Reilly put the ball just over his own crossbar from close range.

Next up for Harps is a trip to Dublin to play St. Pat's on Friday.