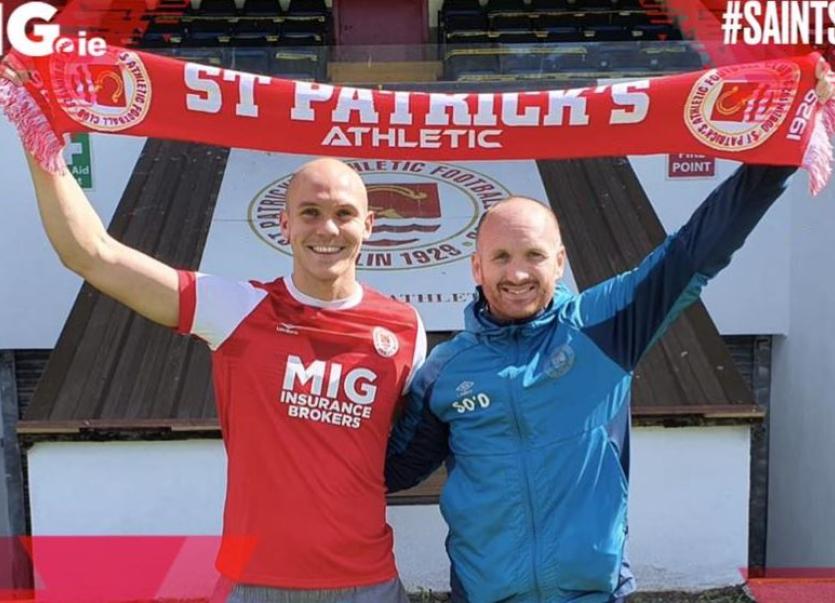 Georgie Kelly (left) is making his mark with St. Pat's and scored twice against Finn Harps

Donegal native Georgie Kelly proved to be Finn Harps' undoing as the St. Patrick's Athletic striker struck twice in the first half to pave the way for victory for the Saints at Richmond Park.

Kelly, on loan from champions Dundalk, netted the opener on 14 minutes and doubled his tally on 28.

Harps have now lost three games on the spin since the league resumed, and remain third bottom.

The visitors actually created the first chance of note when, following a corner, Tony McNamee had a shot but Brendan Clarke in the St. Pat's goal dealt capably with it.

The Saints took the lead on 14 minutes when the ever industrious Robbie Benson did the spade work to set up Kelly who scored from close range.

And Harps were lucky not to go two down in the following minutes as Kelly threatened again while Luke McNally went close with an effort just over the bar.

The second goal saw Harps guilty of failing to clear from defence and Kelly nipped in and rounded Mark Anthony McGinley to score after being found in the box by Jason McClelland.

Cool finish by @Georgiekelly161 to make it 2-0 in the first half tonight pic.twitter.com/v2Kf1FQwc0

St. Pat's Jamie Lennon was booked for a bad tackle on Ryan Connolly, with many in the ground of the opinion that the player should have seen red. Certainly, the Harps bench were not happy at all.

Kelly continued to probe in the run up to the break and Harps trooped off at the interval knowing that something special would be needed to avoid defeat.

The start of the second half saw the home side being less attack minded and putting the onus on Harps to advance and try and get back into the game.

On 53 minutes Harps had a penalty plea dismissed. Substitute Rafael Cretaro - a second half substitute -  went down in the box under a challenge from McNally but the referee Sean Grant had none of it.

While frustrated, Harps were certainly taking the game to their opponents and pressing hard to get the goal they needed to get back into the game.

But they had to thank McGinley for not conceding a third on 59 minutes.

McClelland whipped in a corner which was met by Rory Feely but the Harps net-minder somehow got a touch to it.

And shortly afterwards it looked briefly as if the buzzing Kelly was through on goal but an off-side flag was raised.

With a few tempers beginning to rise, there was a flurry of bookings with Cretaro, Chris Forrester and Sakiki all going into the notebook as the game went into the final quarter.

Both teams deployed a string of substitutes in the closing stages and in the end St. Pat's held on comfortably enough for the victory that sees them rise for fourth in the table.

Indeed, four of the top five clubs are from Dublin.

Earlier, Bohemians beat Dundalk 2-1 at Dalymount Park to move up to third spot in the table.

The Lilywhites have taken just four points from their three matches since the league resumed and are now five adrift of leaders Dundalk.