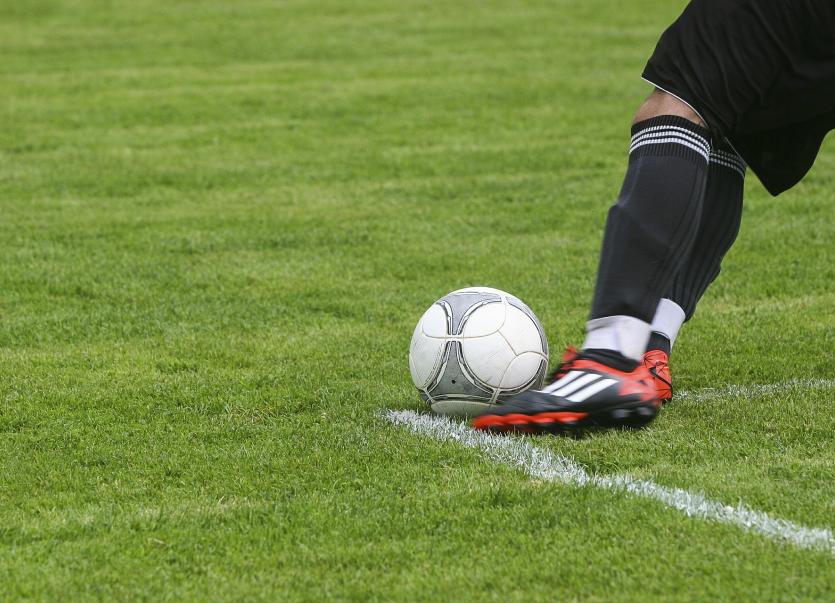 Arranmore were quick out of the blocks when Chum Reynolds lobbed the keeper from outside the area.

Mc Glanaghey then scored the fifth before Brian Proctor made it six on the stroke of half time. Milford grabbed a consolation goal ten minutes into the 2nd half through Lee Burke. Mc Glanaghey then completed his hat-trick to make it seven.

On a day where conditions were fantastic, the game started at a fast pace and Donegal Town found themselves two up inside ten minutes.

Oldtown were dealt a blow when keeper Gibson was forced off but Krissi Mc Laughlin stood in and played a blinder with a couple of key saves in the game.

To their credit, Oldtown fought back before the water break and got a goal back with Tommy Mc Laughlin finding the bottom corner from outside the area.

They then equalised when Luke Nelis finished well to make it 2-2 at half time.

Donegal Town were awarded a second penalty which Mulligan converted again. Oldtown fought back again and got a penalty of their own which was dispatched by Sean Cleary.

The winner came when Tommy Mc Laughlin dribbled to the by-line and his cross was headed back across goal by Sean Cleary for Luke Friel to tap home.

Donegal tried to fight back but Oldtown held on for the win.

Kildrum produced a dominant performance against an understrength Glenea team and punished them by hitting six goals. It was 3-0 at the break with Michael Ayton getting the first. Dean Murray scored his first shortly afterwards. Darren Mc Carron got the third just before the break when he got a touch on a through ball. Murray got his second of the game with a calm finish. James Mc Nulty headed home from a corner soon after that. Caolan Crossan grabbed the final goal with a strike from the edge of the box.

Glencar Celtic were the better team on the day, too strong for a Fintown team who were already relegated.

Cranford were a goal to the good after 10 minutes through a Darragh Morrison strike.  Cranford had further chances but that's how it stayed until the half time break.

Morrison got his second early in the second half and soon afterwards a Dylan Mc Bride free kick put the game beyond Drumbar.

To Drumbar’s credit they applied late pressure and got a goal back.

This victory sealed the title for Cappry who won 14 of their 17 matches to date.

They  started the game well and took the lead in the 3rd minute when Leo Gallagher headed home a Ryan Mc Gee corner.

Cappry were well on top for most of the first half but couldn’t find a way through the Copany defence.

Cappry started the second half on the front foot and pressed Copany back from the start. Cappry made it 2-0 in the 53rd minute when James Speight tapped home from close range. Cappry were well on top and made it 3-0 when Ryan Mc Gee scored with a shot from just inside the box.

Cappry we’re enjoying their afternoon now and made it 4-0 when Kyle Lafferty finished a Jack Bradley cross.

Cappry wrapped up the scoring in the 75th minute when Kieran Neeson tapped home after the Copany keeper parried a Jack Bradley cross.

Castlefin’s hopes of retaining the Premier title were shattered on Sunday when Kildrum beat them 4-1.

Kildrum opened the scoring in the 10th minute with a long-range strike from Kevin Mc Hugh. The home side went close through Shane Gallagher but his shot was dealt with by the Kildrum keeper.

Brian Breslin doubled Kildrum’s lead when he received a through ball and chipped the keeper.

Castlefin pushed hard at the start of the second half, trying to get back into the game but the away side struck again in the 68th minute when Mc Hugh converted from the penalty spot after a foul in the box.

Mc Hugh completed his hat-trick in the 81st minute when he broke free down the right and fired home. Castlefin pulled one back in the dying minutes when Lee Kennedy broke down the left and crossed to Rory Dalton who tapped the ball into the net. Referee: Mick Lagan

Cappry Rovers secured the points when they thumped Milford United 7-0 in ideal conditions at Cappry Park.

Cappry broke the deadlock in the 20th  minute when Alan Getins chipped the keeper.

Cappry went two up in the 25th minute when a visitors’ defender was adjudged to have handled the ball in the penalty area and Aaron Kelly scored from the spot.

Patrick Mc Nulty scored Cappry’s third goal in the 35th minute when he shot to the corner of the net.

Cappry started the second half in whirlwind fashion when Jamie Murray headed to the corner of the net following a cross from Dean O’ Donnell.

Getins got Cappry’s fifth goal in the 48th minute when he scored to the bottom corner of the net past the diving keeper. Dean O’ Donnell got Cappry’s sixth goal in the 71stminute with a shot. Cappry’s seventh goal was scored in the 79th minute by Jamie Murray when he shot to the top of the net following a cross from Dean O’ Donnell.  Team Performance from Cappry. Mark Wison and Pauric Curley were best for Milford. Referee: Alistair Gourley.

Kilmacrennan kept their challenge for the title going with a very hard fought victory in Cranford in which they were behind twice.

Kilmacrennan started the game the better and had a lot of the ball but the Cranford defence stood strong. Chris Dillon was very unlucky after 20 minutes when his lobbed effort rattled the bar. Cranford were very dangerous on the break with James Lee Mc Bride causing all sorts of bother and this paid off after 30 minutes when he held off the defender and a penalty was awarded. Chris Carr stood up from the spot and finished well.

Kilmacrennan again had a lot of the ball in the second half but Cranford stood strong with Jason Hegarty plucking some great crosses from the air. It was level on 55 minutes when a diagonal ball was headed across goal and Ryan Shields applied the finishing touch. Kilmacrennan had a chance to go ahead five minutes later from the spot but Jason Hegarty saved the penalty with a great save.

Cranford restored their lead ten minutes later when a long ball was played through to Mc Bride and he did brilliantly to put the ball over the keeper and being brave enough to finish while colliding with the post.

Kilmacrennan changed their game plan and put the big men on up front and it was rewarded straight away as another diagonal ball was headed across for Timmy Burke to finish.  It was nip and tuck in the final couple of minutes but with five to go Chris Dillon scored a beautiful volley straight to the top corner to put Kilmacrennan in front for the first time.

Cranford didn't lie down and were very unlucky as a great volley by Danny Mc Bride struck the post.

A huge three points for Kilmacrennan while very unlucky on Cranford. Best for Cranford were James Lee Mc Bride and Jason Hegarty, a team effort from Kilmacrennan.

Dara Patton brought his Hoops side into Sunday's encounter on the back of three league wins to put them in contention for the Play-Offs but knew that only a win would suffice and his side duly delivered.

The Hoops opened the scoring on 23 minutes from a fine headed Chris Kemp goal following an inswinging Kevin Doran corner which was deserving after their dominance over the visitors.

However, Ballybofey came right back into contention after the water break and equalised in what was their only real attack of the whole game.

Winger Dillon Murphy volleyed inside the area on 25 minutes following a fine United move which was also a wake up call for the Seasiders. From then on, it was a Hoops masterclass with attacking football which saw United keeper pull off fine saves to deny Eoin Sheridan and Reggie Miller.

With half time beckoning, Niall Carruthers scored with an unstoppable strike into the top right corner of Patton's goal from 25 yards.

Kevin Doran assured the win on 70 minutes when the midfield maestro quickly closed -down United full back John Doherty before calmly slotting past the out-coming Patton in goals. Reggie Miller then saw a thunderbolt strike from outside the area crash off Patton's crossbar. Alawiye finally got on the score sheet on 79 minutes to complete the victory.