Full-report: Back-to-back triumphs for Glencar Celtic as they lift the Voodoo Venue Cup

No joy for Keadue side in final 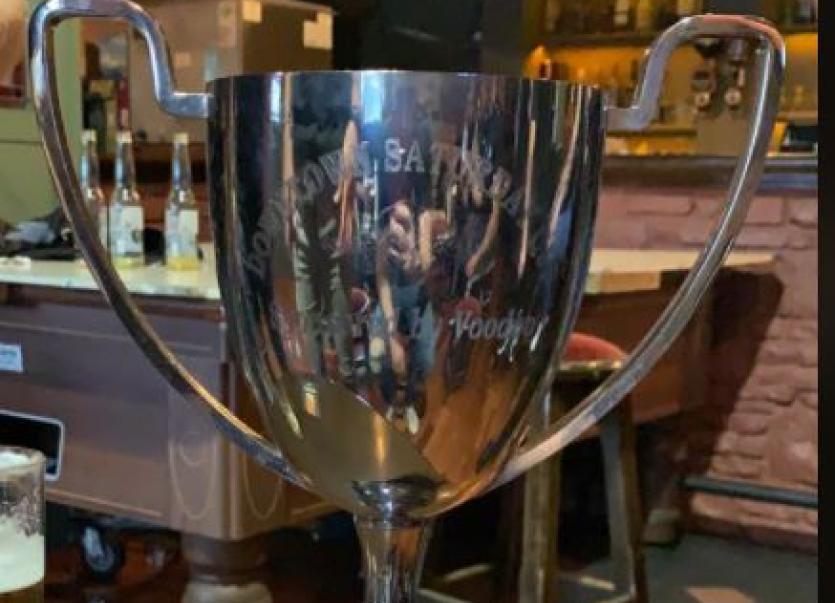 The Voodoo Venue Cup with resting with Glencar Celtic

After their victory in last year's final, Glencar Celtic celebrated lifting the Voodoo Venue Cup once more after a win in Ballyare over Keadue Rovers Reserves on Saturday afternoon.

Eddie McLaughlin netted in the fifth minute to send Glencar on their way before two quickfire goals before the break from McLaughlin and Paddy Collins wrapped things up. Keadue were reduced to ten men on the hour with the dismissal of Jay Doherty with Owen Boyle grabbing a late consolation.

The match was originally scheduled September 5th but was called off due to a Covid-19 scare.

Both camps were delighted with the quick re-arrangement as Diamond Park remained the venue. However, the attendance was once again limited due to the Covid-19 restrictions and guidelines.

Glencar Celtic claimed an early lead in the fifth minute.

Padjo Rafferty controlled a long kick out from Blake Forkan and the former Letterkenny Rovers man played through Eddie McLaughlin who held off his man to finish under the onrushing Declan Ward.

Keadue worked there way into the encounter and had a decent spell approaching the half hour  but despite decent possession their main chance hit the roof of the net via a cross from Owen Boyle.

Glencar looked dangerous and twice in as many minutes, Ward was called upon, first saving from Padjo Rafferty while Ciaran Maloney forced him into a low save.

In their next two attacks, Glencar extended their advantage as they went into the break 3-0 up.

Paddy Collins netted the first of the two goals, picking up the ball roughly 40 yards out and he proceeded to rain down on goal, beating Eugene Byrne in the race for the ball after a heavy touch before lobbing over Ward.

The next goal started via a shot from Maloney which was blocked but nicely fell into the path of Padjo Rafferty who flicked it beyond Ward with Eddie McLaughlin bundling it home on the line with the defender closing in to clear.

Keadue started brightly in the second half, and looked fresh after the introduction of Adam McCaffrey.

The substitute was first to call Forkan into action, hitting the bar with a cross which had the shot stopper scrambling.

He fired two more shots from distance shortly after, forcing Forkan into two low saves to his left hand side.

Keadue's resurgent spell after the break was brought to a halt on the hour as they were reduced to ten men, with Jay Doherty the guilty party, after a lunge on Graham Cullen. Referee Liam McLaughlin was perfectly placed to see it.

The sending off took the sting out off the game as the remainder saw very few clear cut chances for either side.

McLaughlin dragged an effort wide shortly after the dismissal while his strike partner Padjo Rafferty scuffed a low shot into the gloves of Ward with just shy of 15 minutes to go.

McCaffrey narrowly missed with a free kick for his side and approaching stoppage time, Keadue grabbed a consolation goal.

McCaffrey had the effort once more, palmed out by Forkan but it fell directly into the path of Owen Boyle fired into the top corner to the annoyance of Forkan.