Harps get a point to move off the bottom 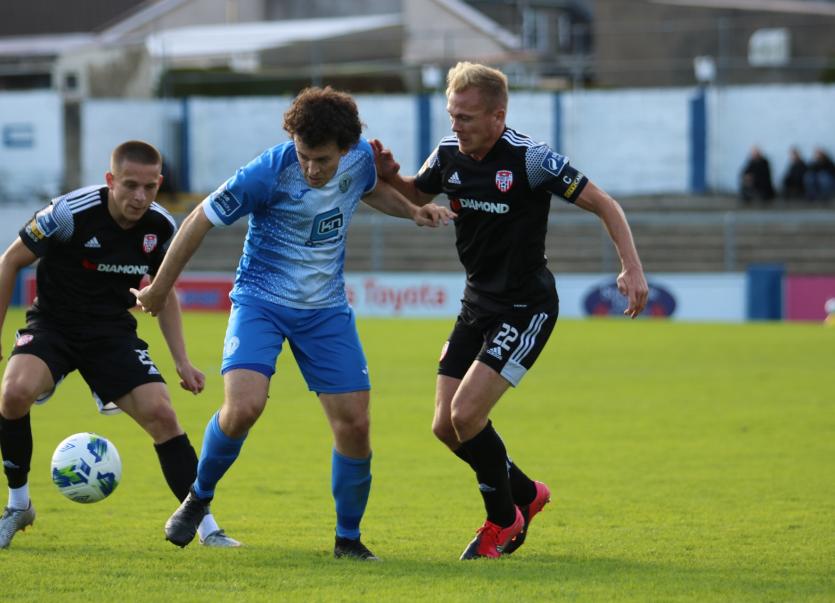 Battling Finn Harps moved off the foot of the table and above Cork City on goal difference after a well-earned 0-0 draw against neighbours Derry City at a sun-kissed Finn Park.

This was the 73rd meeting between the two great rivals and given that Harps have managed just three home league wins prior to this, a point gained would normally be regarded as a reasonable return.

But Harps may well feel that they should have bagged all three points in an absorbing, albeit scoreless encounter.

For City, this draw moves them up to sixth spot, above Shelbourne and St. Patrick’s Athletic on goal difference.

Both sides showed considerable changes from their last meeting when City secured a late Adam Liddle equaliser to deny Harps in a 1-1 draw at the Brandywell back in February.

Harps went into this contest hoping to bounce back from a 3-1 derby defeat away to Sligo and were without the suspended Mark Coyle and Kosovar Sadiki who were both sent-off in that encounter.

City, who had no competitive game last weekend prepared for this clash with a 1-0 win in a friendly away to Larne during the week, but looked the sharper in the first half.

After a cagey opening it was Derry who posed the first real threat on 11 minutes when Walter Figueira carved out some space to get in a shot from 20 yards but Dave Webster, deployed in a centre-half role, did well to block the effort and the danger was averted for the home side.

And Figueria was then involved in the best attack of the first quarter as he whipped in a cracking cross from the left but the probing Oluwaseum Akintunde was unable to meet with the telling connection in front of goal.

Aside from a Karl O’Sullivan effort deflected for a corner, Harps offered little up front.

Moments later City had another chance as Harps failed to clear a Jack Malone corner and the ball fell invitingly for Darren Cole but his shot was well over the bar.

With City beginning to take a grip on the game, it was Malone who had the next pot on goal, from distance, but once again the accuracy was lacking.

Harps conjured up their first real chance of note on 31 minutes when Karl O’Sullivan sent in a decent ball from the right and Austrian forward Alexander Kogler headed not far past the post.

This lifted Harps and shortly afterwards City lost possession in their own half and nearly paid the price as Kogler surged into the box but just as he was about to shoot, Eoin Toal made a great last ditch tackle.

Figueria had another chance for Derry on 35 minutes but could only fire wide in a game that was swinging from end to end.

The visitors finished the second half as the stronger side as Harps had to withstand some pressure that saw a couple of goalmouth scrambles.

City gave Harps a worrying moment after the interval when Akintunde curled a free just outside the target while at the other end Peter Cherrie redeemed himself with a good stop from Kogler following a wayward clearance.

The Candystripes then had a real scare on 52 minutes when Cherrie failed to hold a cross and Stephen Folan rose to meet the loose ball from close range but it was cleared off the line by Darren Cole.

Mark Russell then spurned a good chance for Harps on 70 minutes as the Donegal club enjoyed a good spell with the Derry defence struggling at times.

When the sides last met in Ballybofey, in August 2019, Harps secured a 1-0 victory with Australian Harry Ascroft bagging the only goal of the game.

The versatile midfielder - who scored in the promotion/relegation play-off with Drogheda United at the end of the season - is now long part of the set-up with the Donegal club, having gone back down under in November to join Dandenong Thunder.

Harps boss Ollie Horgan has a habit of unearthing players from far and wide.

And in the final eight minutes, he threw on the club’s newest arrival, Eng;ish striker Jack Serrant Green who had a number of seasons playing in Sweden.

But he was unable to make an impact in his brief debut.

Harps netminder Mark Anthony McGinley was fortunate to get away with a poor clearance that cannoned off Ciaron Harkin on 86 minutes,but he was able to get back and gather the looping ball.

Next up for CIty is a home game against St. Patrick’s Athletic while Harps are now away to Shelbourne.