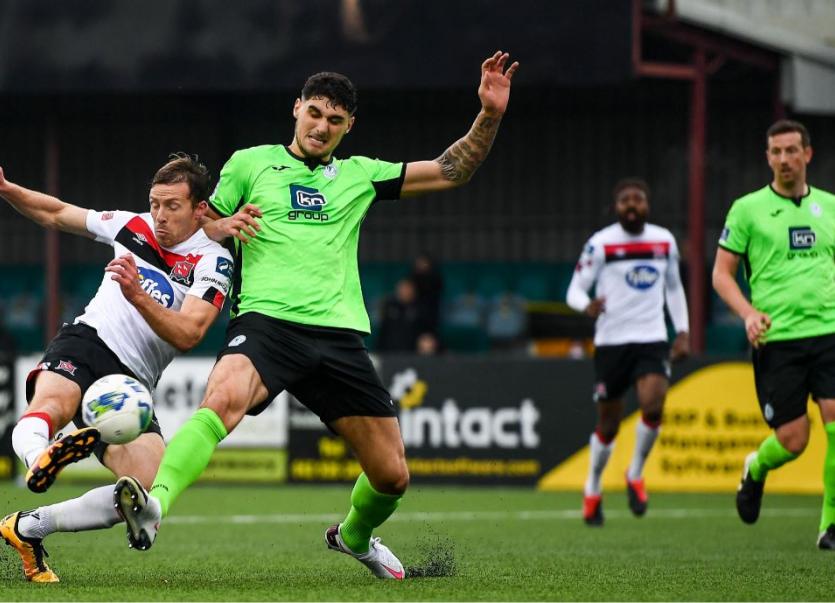 Fresh from their Europa League heroics, Dundalk FC returned to the bread and butter that is the SSE Airtricity League on Sunday evening, but were held to a 0-0 draw by Finn Harps.

A point on the road against the champions must be seen as a good return for the Donegal club, whose recent record at Oriel Park has been pretty miserable.

And they were good value for a share of the spoils, although one did sense in advance that if ever there was a chance to get something off the Lilywhites then this was it.

The first of what is going to be an arduous nine competitive games over the next four weeks forced Filippo Giovagnoli to make ten changes from Thursday’s win at the Aviva Stadium.

Harps defender Stephen Folan was the only player featuring to have represented both clubs and, after some early pressure from the visiting team, he fired a free-kick well over the top.

Perhaps the best chance of what was a scrappy first half happened at the other end moments later, when a Jordan Flores cross from the right was met by the outstretched leg of David McMillan, but the Dundalk man just couldn’t direct his close-range effort on target.

After a Barry McNamee corner was headed over by Kosovar Sadiki, a much-changed Dundalk started to grow into this game. Daniel Kelly – fresh from his heroics on Thursday night – was causing problems down the right and his cross was headed wide by McMillan.

Indeed, there were more chances for the hosts after that.

Cameron Dummigan, from distance, fired miles over the top, while John Mountney – playing as a right-back – sent in a great delivery that was met at the back post by Nathan Oduwa, but he diverted just wide.

Oduwa – one of the few shining lights in last week’s 4-0 defeat to Shamrock Rovers – was beginning to cause trouble for Harps and he showed some great skill to beat the challenge of more than one defender, but his poked effort was saved by the feet of Mark McGinley.

Straight after that, Oduwa found himself in space before unleashing a shot which had to be pushed around the post by the Harps goalkeeper.

Oduwa then had a penalty appeal waved away right on the stroke of half-time after he appeared to be pushed in the box by Shane McEleney.

Harps frustrated Dundalk for the entirety of the second period, restricting The Lilywhites to virtually zero clear-cut chances.

Shortly before being substituted, Flores skied his attempt well over, with Mountney also seeing a free-kick sail miles off target with 20 minutes to go.

Patrick McEleney was one of four players introduced by Giovagnoli in the second half and, after spotting McGinley off his line, he saw a quick free from distance loop just over the bar.

Another substitute, Greg Sloggett, headed straight into the arms of McGinley before Barry McNamee, after controlling well, fired a low drive straight into those of Aaron McCarey.

Dundalk had a second penalty appeal turned down by referee Paul McLaughlin when Sloggett looked to have been clearly pushed by a Harps defender from a corner, but the appeals were again waved away.

The Lilywhites had to settle for a share of the spoils after Michael Duffy volleyed wide in the dying embers, with Harps holding out for a point.