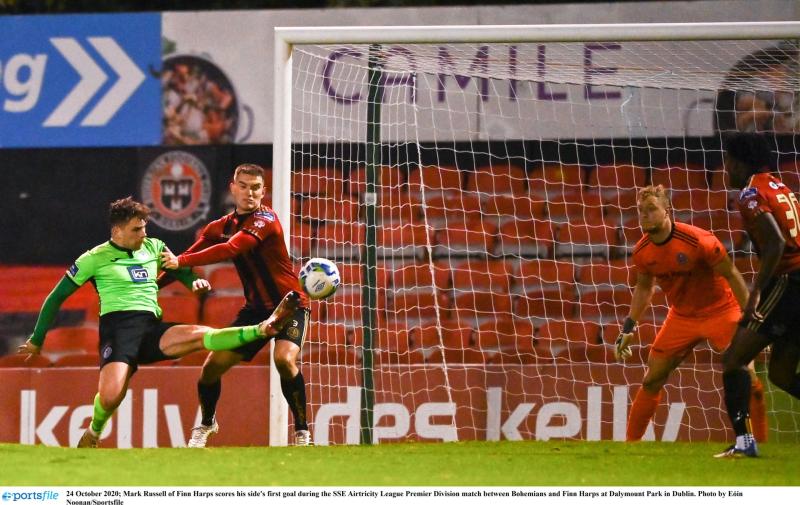 Mark Russell scored twice as Finn Harps recorded their first league win at Dalymount Park since 1999 - a result that means that Shamrock Rovers are champions, Cork City are relegated and Harps are assured of a promotion/relegation play-off at worst.

Second-placed Bohs can no longer catch their arch-rivals who are now celebrating their first title since 2011 - and the Tallaght-based side still has four games to play,

Sligo Rovers’ 2-1 defeat of Cork earlier this evening means that the Leesiders go down as they have only one game left and are four points adrift of Finn Harps.

This was a wonderful result for Ollie Horgan’s team.

Harps are now unbeaten in five in the league. They still have three home games to play, and are on 14 points, five points behind Shelbourne, St. Patrick’s Athletic and Derry City who are all on 19.

A play-off spot looks the most likely, but mathematically Harps could still catch one of the three sides above them.

Bohs, already assured of European football next season, produced the first chance almost straight from the kick-off with Keith Ward unleashing a shot from distance but it didn’t trouble Mark Anthony McGinley.

But Harps, with four straight draws behind them, showed their resolve from early on and Mark Russell wormed his way towards goal before winning a corner on 11 minutes.

Harps were dealt an injury blow after just 17 minutes when Karl O’Sullivan had to depart the action and was replaced by the towering Dubliner Adam Foley, whose brief appearances since signing have suggested he is quite a handful.

Bohs’ next chance of note also fell to Ward as he latched onto a fine Keith Buckley pass but he was able to get the touch required to get past McGinley.

It looked like the home side were getting on top during the mid-point of the first-half, with a fine flowing move involving Keith Buckley, Ward, Danny Grant and then Buckley again sounding a warning for Harps, Moments later Ward fired left of the target.

Not for the first time, the long throws of Tony McNamee were causing issues for opponents and it was the battling midfielder who went close to putting Harps ahead on 33 minutes with a shot that forced James Talbot to get down smartly and save.

Foley then should have done better when presented with an opportunity just afterwards with the aforementioned McNamee being the provider.

Harps had a couple of scares with Andre Wright and Promosie Omochere threatening for the Gypsies before the deadlock was broken by Harps three minutes into stoppage time at the end of the first half.

A Tony McNamee long throw once again proved to be problematic and Russell was in the right place to get onto Kosovar Sadkiki’s flick to plant the ball past Talbot.

Bohs were then stunned again just six minutes after the break as Russell once more found the target, delivering a superb shot past the despairing Talbot as he ran onto a Foley cross.

Harps found themselves being forced to defend deeper with a what we have we hold policy.

McGinley was soon called into action to make a couple of saves and 16-year-old teenage sensation Ferguson certainly looked lively, with one effort hitting the post.

But Bohs’ hopes of a come-back and thus the chance to postpone the Rovers’ celebrations suffered another set-back on 74 minutes when defender Anto Breslin saw red for kicking out at Leo Donnellan.

Bohs kept pushing hard to try and pull one back. Had their been a crowd in the old stadium, it would have been quite an atmosphere.

Harps were then reduced to ten men on 85 minutes when Donnellan got his marching orders for a bad challenge of James Finnerty.

But Harps held on for a memorable result, after almost eight minutes of additional time.

Their last league win here, in 1999, saw Jonathan Speak emerging as the hero in a 1-0 success.

Tonight Mark Russell got a brace of goals he won't forget.

And Harps are in with a fighting chance of staying in the Premier Division.