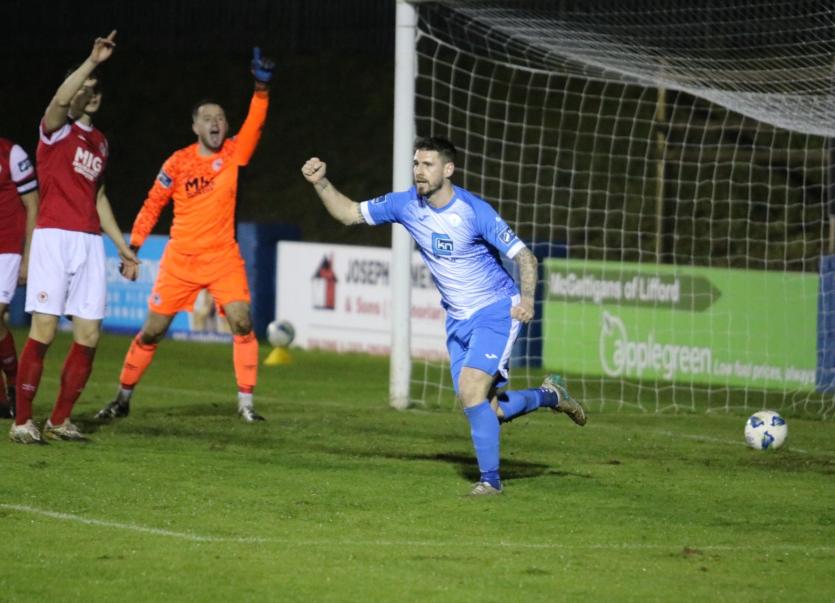 Finn Harps notched up back-to-back league wins for the first time this season as they boosted their chances of avoiding the relegation play-off spot while at the same time denting St. Patrick’s Athletic’s flickering European hopes in a thriller at a wet Finn Park in Ballybofey.

Harps, who led 2-0 inside 11 minutes only to be pegged back to 2-2, bagged the points thanks to a 73rd minute match winning penalty from Ryan Connolly.

This result moves Harps to within two points of Shelbourne, Derry City and also Pat’s.

In a dramatic first half, Harps took the lead after less than four minutes when Dubliner Adam Foley, who was previously with Newry Town, struck with his first goal for the Donegal club.

St. Pat’s were caught napping at the back and Foley stole in to seize possession and fire the ball low and hard into the far bottom corner.

Jordan Gibson then curled a fine effort narrowly past the Harps upright while at the other end Ryan Connolly sent in a dipping free not far off the target in an extremely lively opening spell.

Harps then doubled their advantage on 11 minutes as the Saints struggled to clear their lines and when Dave Webster - a former Inchicore favourite - sent the ball back across the face of goal and Stephen Folan was on hand to get the last touch and force it over the line.

But within 60 seconds St. Pat’s had pulled one back. Harps were unable to clear a corner and as the ball pinged around the six-yard box, Luke McNally rose to head home.

On 23 minutes following a fine flowing move Mark Coyle let fly with a cracking shot that Brendan Clarke did well to tip over.

And on 33 minutes the impressive Foley went close again with a shot just wide of the post.

Harps almost made it three on 35 minutes when Foley found Mark Russell whose thumping drive smacked off the post.

St. Pat’s had a penalty appeal for handball dismissed before the interval in what was the best game of the season at the Fknn Park.

The Saints equalised eight minutes after the break when Donegal native Georgie Kelly latched onto a Shane Griffin cross to head firmly past Mark Anthony McGInley.

Harps then made it 3-2 in the 73rd minute through Connolly’s penalty after substitute Raffaele Cretaro was taken down by Rory Feely.

Connolly then spurned a great chance to make it 4-2 on 85 minutes but was thwarted by the diving Clarke, and moments later Adrian Delap also connected with a Connolly cross inside the six-yard box but could not steer it home.

This was only Harps' second  home win of the season, and the first time they have scored three goals on their own turf.

But following last week's great away win  over Bohs, they have really hit form.

And they are now in a with a fighting chance of even avoiding the play-off spot and getting absolute safety.

Harps have two more league games to play, at  home to Shamrock Rovers and then Waterford.