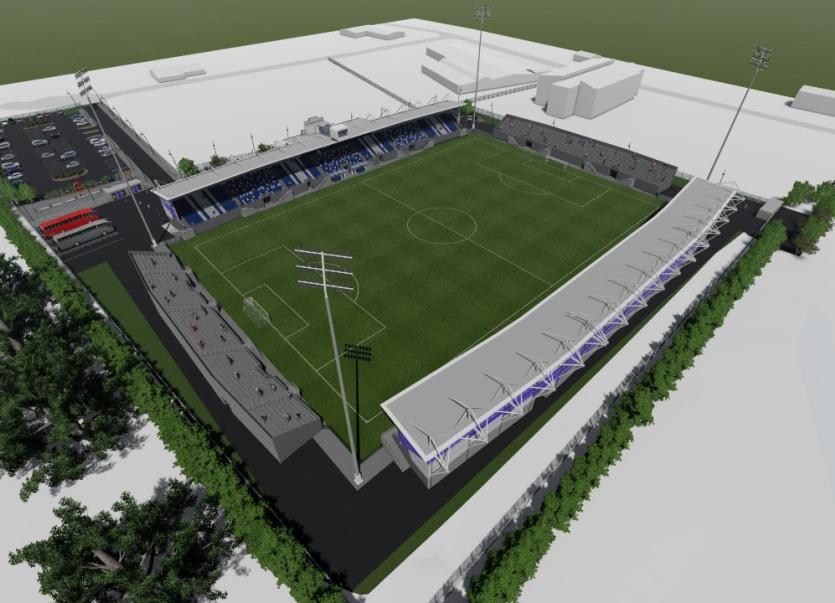 An image of the new stadium

The Chief Executive of the FAI, Jonathan Hill believes that the construction of a new stadium for Finn Harps will be an “opportunity for the growth of football” in the county.

His comments come after the Football Association of Ireland welcomed the Government’s allocation of €3.991M to the FAI under the Large Scale Sport Infrastructure Fund for the development of the new Finn Harps stadium in Stranorlar.

The funding announced by Ministers Catherine Martin and Jack Chambers comes on the back of a sustained campaign by the club, backed by the FAI and the local community, to bring the project to life.

SSE Airtricity Premier Division leaders Finn Harps commenced this project back in 2006 and their determination to build a new home for football in the North West remains as steadfast as ever having survived so many obstacles in the past 14 years, not least the worldwide recession and the current COVID-19 pandemic.

Chief Executive of the FAI Jonathan Hill said: “The FAI sees this development as a major priority for our game in the region, not just for Finn Harps but for every constituent in Donegal from grassroots level up as this stadium offers so much opportunity for the growth of football in the area.

“This news is positive for so many football people of all ages - our players, their parents, volunteers and supporters and also for the League of Ireland as we look to improve facilities for our clubs and our fans. I raised this issue with Minister Chambers back in February and I want to thank him, Minister Martin, former and current Ministers who have been involved in the process and all the local politicians for their support for this project.

“A word of thanks also to our own Facilities Department, led by Walter Holleran, for the considerable work they have undertaken to date in collaboration with the club and with the Department of Sport. Rest assured we will continue to support Finn Harps on this project in every way we can.”

FAI President Gerry McAnaney added: “This is a red-letter day for everyone connected with Finn Harps and sport in Donegal. With strong family connections in the area, I know better than most what this means for football in the North-West and I am delighted to see this funding commitment from Government.

“This project has been alive for many years now so to finally see the end line in sight is a real boost for the club, for Donegal and for the region. There is a lot of hard work ahead to finish this project but I know Finn Harps and their local community will deliver a stadium to be proud of in Stranorlar.”

The €3.991M awarded by Government is a provisional allocation under the Large Scale Sport Infrastructure Fund (LSSIF) for the development of the Finn Harps stadium and is contingent on compliance with the terms and conditions of the LSSIF.

The FAI’s Head of Facility Development Walter Holleran said: “We are delighted that all the hard work put in by everybody at Finn Harps and at the FAI to support this application for LSSIF support has paid off.

“Today’s good news is about Finn Harps but there are so many other projects underway across the country so the Government support in this instance is both vital and encouraging. We are all working together to make Irish football better and the commitment from Cabinet to this project is to be applauded.

“I also want to thank the club officials who have dedicated so much time and effort to get the development of the new stadium to where we are today, in particular the Finn Harps Ground Development Committee including chairman Patsy Lafferty, Board representative Paul McLoone, Alex Harkin, Alex Brady and John Meenan. The club has a lot more hard work ahead to complete the project and we will continue to support them however we can.”