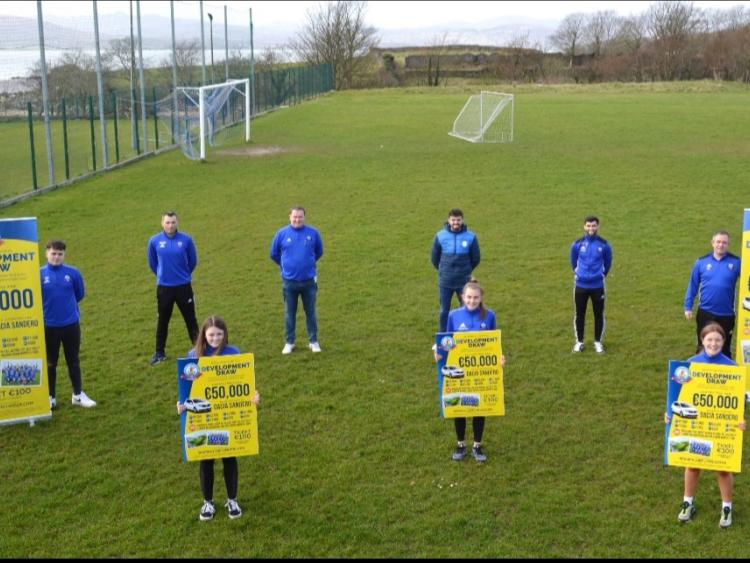 EXCITING TIMES: Buncrana Hearts players at the launch of their big development draw.

An exciting new era looms at Castle Park as Buncrana Hearts aim to completely transform their ground with the help of an ambitious super draw.

The club, founded in 1961, has been a formidable name in Donegal football circles for several decades, but in recent years their facilities have not quite matched their reputation.

Growing increasingly frustrated at having a main pitch that is virtually unplayable for two-thirds of the year because of drainage problems, the club has seized the bull by the horns with the launch of a big draw they hope will fund a massive renovation that will meet the needs of their ever-growing number of teams.

Donald O'Doherty, veteran Hearts player and member of the finance committee formed to oversee the draw, told Donegal Live: "One of our pitches is out of action for virtually eight months of the year because of drainage issues. In the winter months especially, we often have to cancel training because the pitch is waterlogged.

"In addition to our first and reserve men's teams, we have a number of girls teams as well as all our underage boys teams, and it's so difficult to accommodate them all because of the difficulties with the pitches."

Determined, however, to rise above the challenge in order to provide the best possible facilities for their growing numbers, the club has taken a massive leap of faith with the draw, which they hope will raise a considerable cash sum that will enable them to undergo a complete overhaul of their pitches and surrounding facilities in the hopefully not too distant future.

"I remember a couple of years ago we were playing at home to Greencastle," said Donald, "and one of their players said to me '25 years ago you guys would've had one of the best facilities in Inishowen, but it's not like that now'.

"And he was right. When you look round and see what other clubs in the Inishowen League have done in terms of astro pitches and all the rest, it's true that we have fallen behind.

"As a player that has always been frustrating, because you think that the club maybe hasn't achieved what it could have done because of those limitations."
But now the club's fortunes look set for a huge turnaround following the decision to launch the big money draw.
The idea was first floated in February, and in just two short months, the plan has taken up serious speed.

Explained Donald: "I co-manage the men's reserves team along with Sean Tolley, and it was Sean who initially came up with the idea of a draw.
"The club had a meeting about it, and fairly quickly we had a finance committee up and running and were able to do the official launch on St Patrick's Day."

In terms of ticket sales, they are already nearing the magic halfway mark, with roughly 900 of their 2,000 target sold.
Donald admits it was nerve-wracking at the beginning to undertake such a big project, especially in the midst of such uncertain times financially, but says they have been overwhelmed by the support shown to them by both former players and the local community in Buncrana.

He said: "We looked at the house draw Aileach did and the benefits it reaped for them, but naturally we were also thinking, 'will we manage to sell so many tickets?'
"So there was a bit of stress, definitely. But we just tried to put any negativity to one side and get on with things, and the response we've had has been brilliant.

"Each coach from every age group took a minimun of ten tickets each to sell, and a lot of them have sold them and come back for more.
"We've sent 100 to Boston to be sold by ex-players over there, 20 have gone to Australia and and we've tickets away out to Belgium and France.

"They are also available online, so as well as those who have an interest in supporting the club, I suppose there would be just regular people who would like to be in with the chance of winning €50,000.
"Ciaran McKenna down at the Centra has very kindly offered to let us have a stall outside for a day, and when things start to open up a bit with the covid situaion we will hopefully be able to have a night a week at the club for ticket-selling."

The club has drawn up preliminary plans for the ambitious pitch renovation, which they hope they can break ground on in 2022.
In the meantime, the top pitch at Castle Park is currently in the process of being re-sown thanks to the sterling efforts of legendary pitch specialist Adrian 'Nadger' Cutliffe.

"Adrian is doing all the work on his own time and we only have to provide materials," said Donald, "which we are so grateful for.
"He says he'll have it looking like Maginn Park and ready to play on in September.

"In the meantime, we'll have to get by the best we can on the lower pitch and hope the weather is kind over the summer.
"But there's a real buzz about the club about what the future holds. So many of us have been there and enjoyed our years playing with Buncrana Hearts; now we want to do what we can to make sure the next generation can enjoy the best facilities possible."

Tickets for the draw, which is likely to take place on December 28, can be bought from any committee member, or online at //klubfunder.com/Clubs/Buncrana_Hearts_FC.

Trashing has got to stop says Aontú rep in Donegal