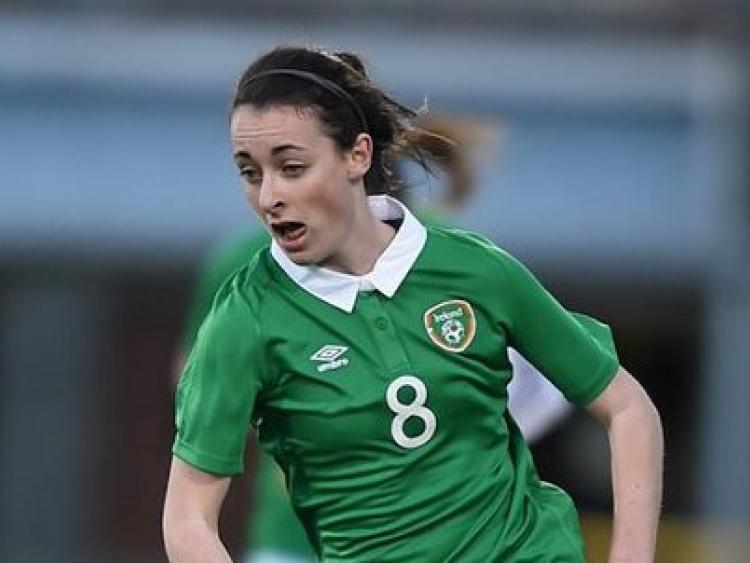 OVERLOOKED: It's been three years since Roma McLaughlin represented her country.

Roma McLaughlin's star continues to rise rapidly in the United States, with the Greencastle native having yet another standout season for Central Connecticut State University (CCSU).

McLaughlin scored as the 'Blue Devils' beat Long Island 4-0 to land the Northeast Conference Championship this week for the third consecutive time.

Since moving to America in 2018 to join CCSU on a four-year sports scholarship, the accolades have been mounting up for the 23-year-old.
In her first season, having helped the Blue Devils to the league title, she won 'Rookie of the Year'. The following year she was named 'Midfielder of the Year' and was named on the women's soccer All-America team - the first player from CCSU to achieve this.

And now, in her third year, it's more of the same, with her standout performances this season earning her the NEC's coveted 'Most Valuable Player' accolade in addition to 'Midfielder of the Year'.

I caught up with McLaughlin via a Whatsapp call earlier this week and, unsurprisingly, the former Moville Community College pupil was in high spirits.
"I'm really happy with how the season has gone so far, she said. "The league was a short one because of the covid situation, but we won every game and only conceded one goal in seven matches.

"I was really happy to get the MVP award. Since moving to America I feel that my fitness and strength have got a lot better over the 90 minutes.
"I'm covering box to box a lot more and scoring a few more goals, so it feels good to be more involved and to have that as part of my game."

Only a few years ago, it looked for all the world as if McLaughlin was destined for great things with the Republic of Ireland's senior women's team.
In 2016 she shone for Ireland in the UEFA U19 Championship qualifying round, and was awarded the U19 player of the year at the FAI's international football awards in 2017.

Along with her underage involvement, she was cautiously (understandably, given her relatively young age) introduced to the senior set-up, making her debut in 2016 before going on to make further appearances in the 2017/18 season.

But, since moving to America three years ago, McLaughlin has not featured in the green jersey, which is a bit of a head-scratcher given her superlative form for her college side.

Geography doesn't appear to be a factor, as other players based in America, Australia and Germany have been called into the squad.

Her latest run of impeccable performances prompted the Women's National League show to put the issue to current Ireland women's boss Vera Pauw, via her Twitter page, this week:
"Roma McLaughlin for Ireland @verapauw has to call her up, she's the most technically gifted player to come out of Ireland in a long time."

By all accounts, Pauw had been watching the CCSU match against Long Island and tweeted, "It surely was an interesting game in which both Roma and Kelly (Brady, McLaughlin's teammate and fellow Irishwoman) showed their qualities."
Whether this will prompt Pauw to bring McLaughlin back into the fold remains to be seen; those who believe it's crazy that she's not representing her country must now wait and see.

McLaughlin herself admits her estrangement from the national set-up has been difficult to deal with at times.
She said: "It has been frustrating. From a young age, I did everything I could get to play for my country. I travelled the length of the country, from Donegal down to Dublin, for training and matches and all the rest.

"Since moving to America I've been on the stand-by list, but in the last while I've not been on that. I think it's probably a case of someone coming in that doesn't really know me as a player or a person.

"I was upset for a long time about it, as I would love to be playing for my country, and you do ask yourself 'what are the reasons?'

"But in the last few seasons I've tried to put it out of my head and not overthink things. I've just been concentrating on myself, working on improving as a player and focussing on my game here with CCSU."

McLaughlin will complete her degree next year, so she has plenty of time to decide what's next in terms of her playing career.
"I want to play for as long as I can, and the hope would be to play professionally, possibly over here in the States.
"Next year I would want to see about entering the draft, where the dream would be to get picked up by one of the big sides.
"Some would consider it quite impossible, but me making All-American last season, it's things like that they look for so we'll just have to see how things go.

"No matter what, I'm glad I came to play in America. I feel I've improved so much as a player and it has given me an education and shown me the world."

Trashing has got to stop says Aontú rep in Donegal