Third game without a win for Harps as St Pat's impress 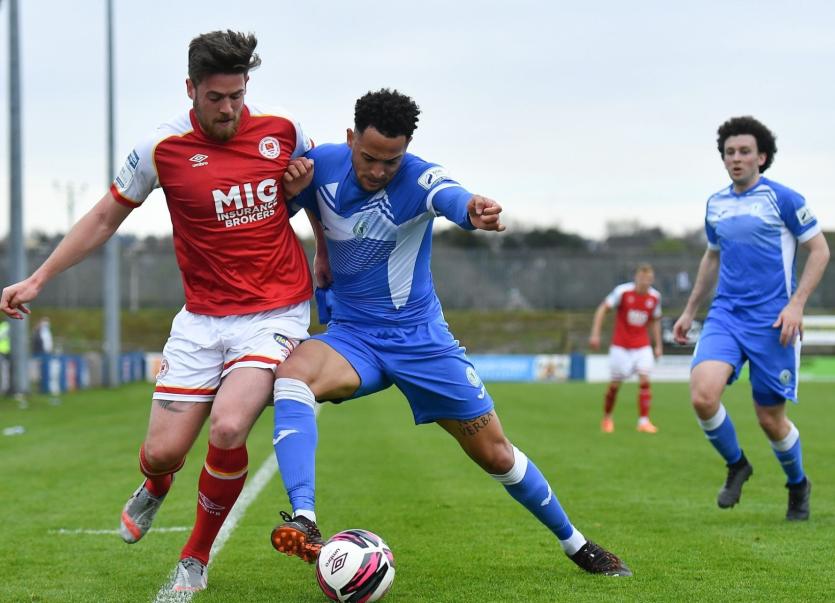 Will Seymore of Finn Harps in action against Sam Bone of St Patrick's Athletic during the SSE Airtricity League Premier Division match between Finn Harps and St Pat's. Photo: Sportsfile

Goals from Billy King and Matty Smith helped the high-flying Supersaints to maintain their great start to the season with their extra class showing as they inflicted a first home defeat of the season on Finn Harps.

Driven on by the ubiquitous Chris Forrester, St. Pat’s have now extended their unbeaten run to seven games while Harps - after such a bright start to the campaign - have now gone three matches without a win and are six points adrift of the Dubliners.

In a well contested opening quarter on a rare sun-kissed summer-like Finn Park surface, Harps had the better of things.

They forced a number of early corners with striker Ryan Shanley, on-loan from Hibernian, going close on a couple of occasions after good build-up play involving Barry McNamee.

At the other end Sam Bone was not far wide with a header from a corner.

But on 25 minutes, Harps had a real scare when the ever resourceful John Mountney fired a shot right across the face of goal from a tight angle and just wide.

And it was the Saints who went in front on the half hour as Bone picked out Billy King who fended off a number of challenges as he snaked his way to the edge of the Harps box before unleashing a cracking shot past Mark Anthony McGinley.

For a brief spell, Harps looked in bother as the visitors - buzzing with confidence - sought a second but they could not add to their tally before the interval.

Chris Forrester always looked a threat for the Saints on and 50 minutes let fly with a thundering effort that was not far over and moments later Pat’s had a penalty plea for handball dismissed as Harps found themselves under pressure.

The Saints doubled their advantage on 61 minutes when Ronan Coughlan got into the box and found Matty Smith whose looping header went beyond the reach of McGinley.

Harps never stopped battling but were unable to pull one back as the Inchicore side stood firm.

Not for the first time, Harps boss Ollie Horgan produced a match-day surprise.

The injury prone Ballybofey native appeared to have played his last League of Ireland game for Sligo last season.

But just as he has lured the likes of Barry Molloy, Paddy McCourt and Raffaele Cretaro back into action again in the past, Horgan has been at it again.

Dunleavy acquitted himself well, but his debut ended in defeat.

Harps didn't play badly at all, but St. Pat's just had the extra edge where it matter.

Next up for the Donegal side is another home game, against Shamrock Rovers next weekend.