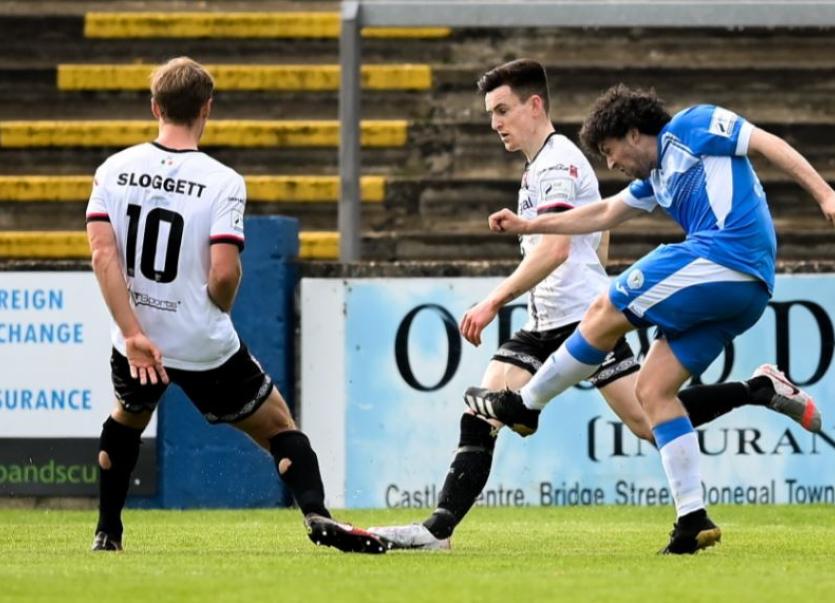 Norwegian Ole Erik Midtskogen bagged his first goal for Dundalk as the Lilywhites came from behind to earn a point against Finn Harps in an absorbing Finn Park contest.

Harps deserved their first  half lead through Barry McNamee but Dundalk came storming back after the  break and in the end will have been bitterly disappointed not to have secured victory.

Goalkeeper Mark Anthony McGinley emerged as the hero of the day for Harps with a string of fine saves in the final quarter as Harps ended up clinging on for a point.

Both teams went into the game hoping to recover from set-backs last time out, with Harps having been thumped 4-0 away to Bohs while Dundalk slipped up 1-0 at home to ten-man Sligo Rovers.

Not surprisingly, there were a few alterations to both starting line-ups. Young midfielder Stephen Doherty, one of four changes in the Harps team, looked lively early on with a couple of raids down the left flank with the home side on top in the centre of the park.

The first real opening came in the 14th minute when Adam Foley outfixed two Dundalk defenders on the left side of the box before finding Mark Coyle, but he blazed over from a decent position.

Moments later, Doherty flighted in a delightful ball that was headed down by Karl O’Sullivan into the path of the advancing Barry McNamee but he never really got hold of his shot and the danger was gone.

But Harps’ spell of pressure paid off on 19 minutes when  Foley found McNamee, with space just inside the box, and he let fly with a delightful shot into the top far corner.

And Dundalk were lucky not to concede a second when an O’Sullivan shot from a tight angle flashed across the face of goal and just wide five minutes later.

Aside from a couple of half-chances - including a Han Jeong-Woo shot over the target - Dundalk were largely playing second fiddle to a Harps side growing in confidence.

But Dundalk missed a good opportunity on 28 minutes when Michael Duffy should  have done better with a far post header as he rose to meet a Jeong-Woo cross but could not direct it past McGinley.

And shortly afterwards Sean Murray had a close range header saved at the expense of a corner as the visitors responded with a better period of play.

Dundalk got the second half off to the best possible start as they drew level on 48 minutes with Michael Duffy crossing for the towering Midtskogen to head home his first goal for the club.

Jim Magilton’s side were certainly much improved after the  break.

And in the final quarter, Wilfried Zahibo could have put them in front but headed wide from a good position while McGinley made a great save to tip over a Midtskogen header, and then thwarted Duffy while Ryan O’Kane had a shot blocked.

Harps were the better side in the first half while Dundalk, so disappointing before the break,were a changed side in the second half.

Interestingly, five years ago, back in May 2016, rampant Dundalk hammered Harps 7-0 in Ballybofey. Only two players from that game, Ethan Boyle of Harps and Andy Boyle, of Dundalk, played in this encounter.

Much has changed, it seems, at both clubs. Harps beat Dundalk 2-1 at Oriel  Park earlier in the season in what was their first victory over the Louth side since 2007. They have now garnered another point.