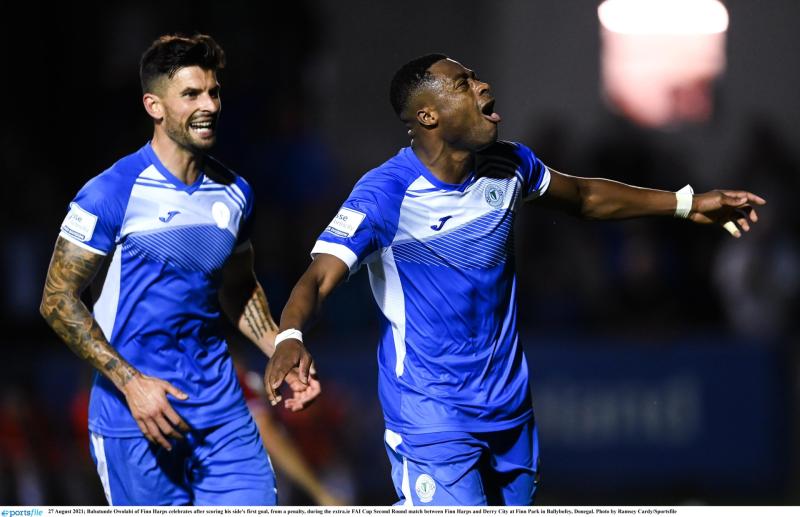 A Tunde Owolabi penalty 16 minutes from time for Finn Harps proved to be the only goal in the extra.ie FAI Cup Second Round tie against Derry City.

The Belgian scored a hat-trick last week against St Patrick’s Athletic and stepped up to score with conviction from 12 yards following a foul by Ronan Boyce on Ryan Rainey to give the Ballybofey side their first ever win over their rivals in the FAI Cup. 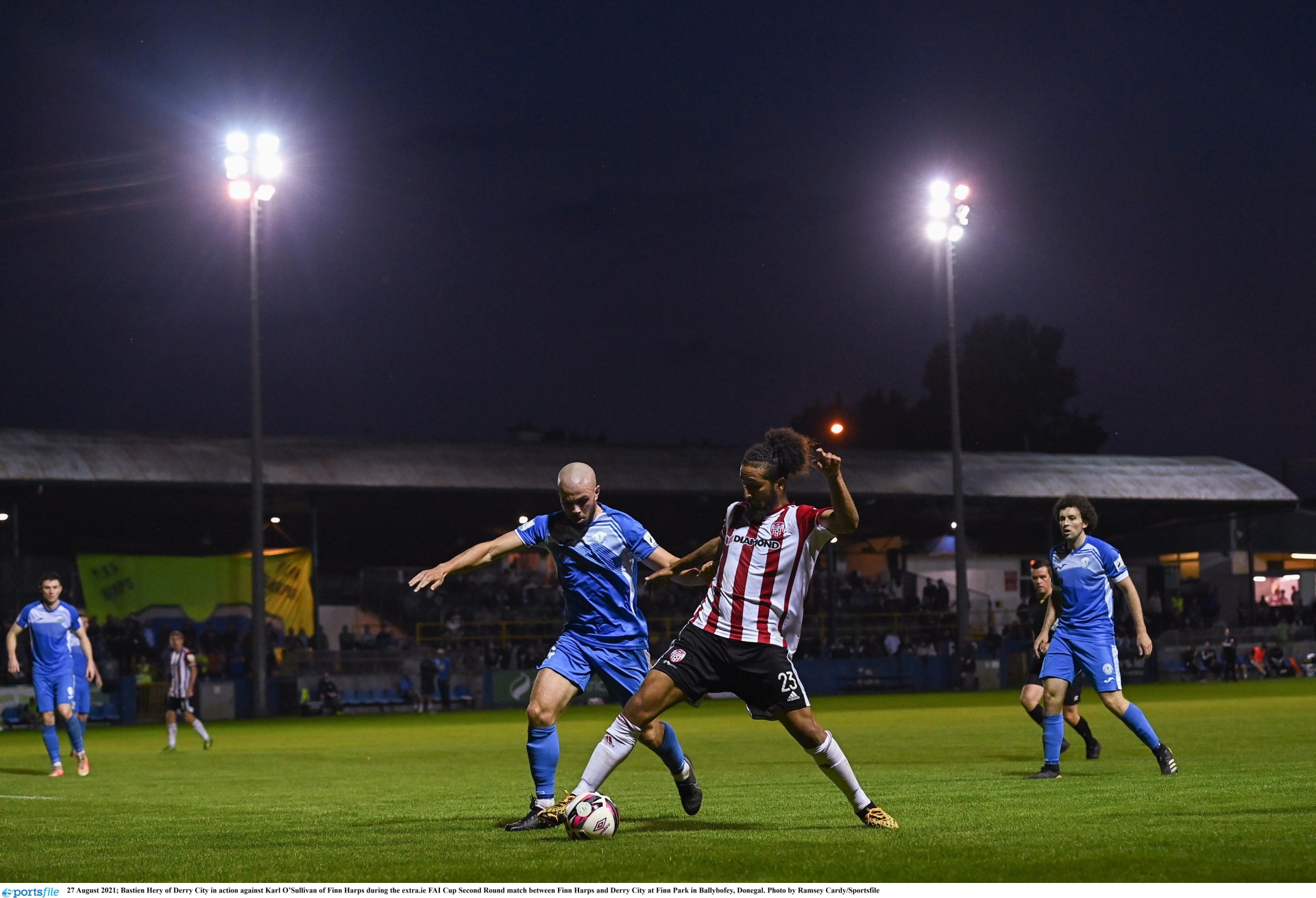 Keenly contested with few chances, the home side managed by the suspended Ollie Horgan who watched from the terraces in the 800-strong crowd, were the ones who pushed more for the winner, while Ruaidhrí Higgins’ team only began to play when they went a goal down.

Gerard Doherty, the goalkeeper who made 324 appearances for Derry City, was making his Harps home debut against his hometown club and made three important late saves to send his new employers through to the quarter-finals.

Neither goalkeeper was seriously tested in the first half, with Harps left-back Jordan Mustoe fizzing a couple of shots over at the River End and Doherty had no bother gathering a scuffed effort from Danny Lafferty.

Both meetings in the league this term ended in 2-1 victories for the visitors, with Adam Foley scoring a later winner at the Brandywell in May before a double from Will Patching sealing victory for Derry in Ballybofey in June.

Ten minutes into the second half, Foley’s snapshot from the edge of the penalty area went just over Nathan Gartside’s crossbar. Then, Foley, from an erratic crossfield clearance from Eoin Toal, outmuscled Lafferty and cut inside to shoot, drawing a full stretch save from Gartside in the Candystripes’ goal on the hour. 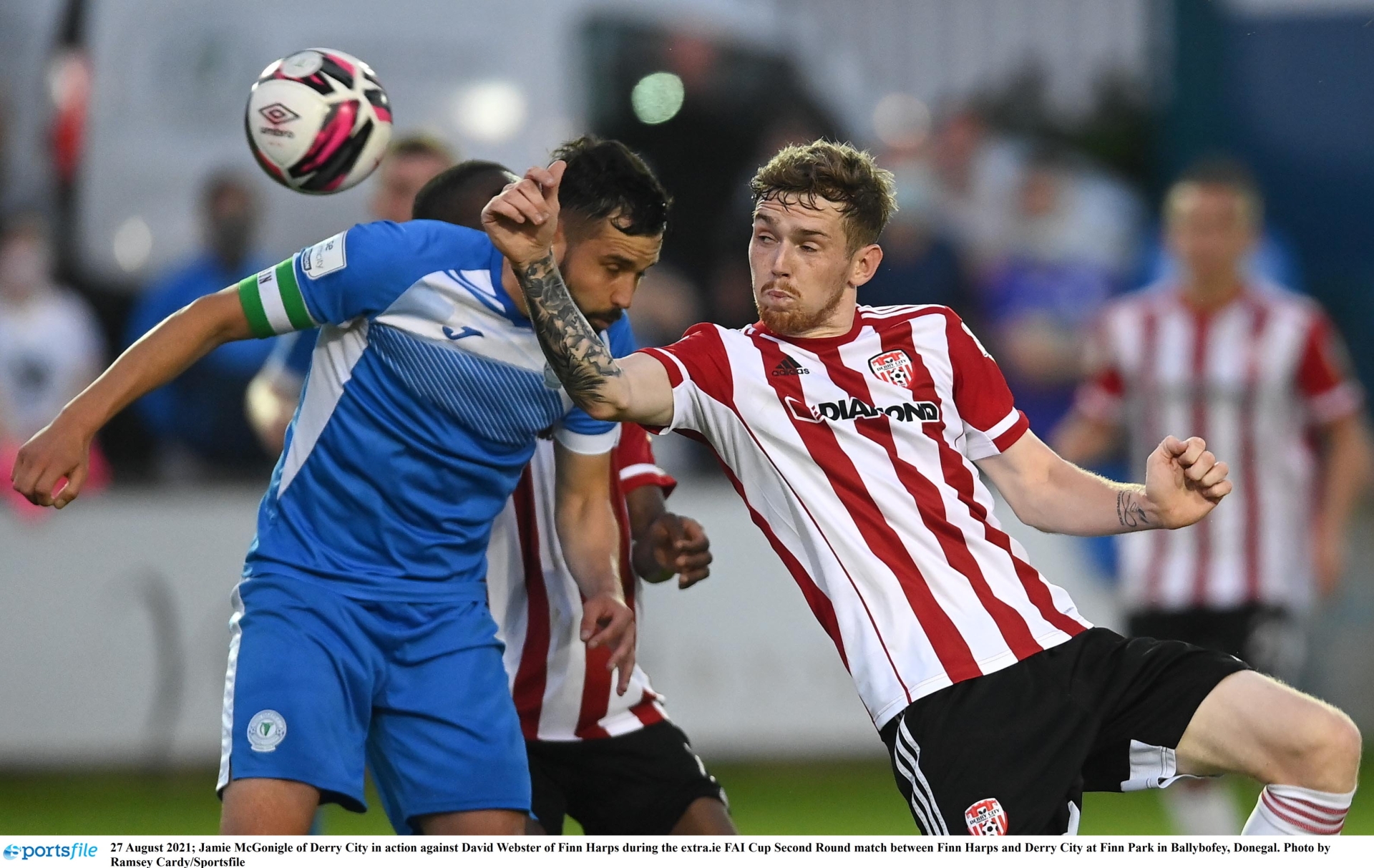 Following the goal, Owolabi headed another chance wide and Doherty in goal knew he’d probably not see the night out as quiet as it had been. Nine minutes from time he got down well to save from substitute Evan McLaughlin, with the visitors’ first meaningful attempt of the night.

Jamie McGonigle, three minutes into injury time, cut inside Karl O’Sullivan and drew another save from Doherty, who then had to be at full stretch to tip over a speculative strike from former Harps captain Coll.

Derry showed a type of urgency in the closing stages that was not evident throughout. Craig Forrester, from a St Pat’s penalty, is the only man to breach the Harps defence in the last five outings - that’s 537 minutes seeing as Fairview Rangers took Horgan’s team to extra-time in the previous round.

Until his appointment, Harps had only beaten Derry five times in their history. Since the opening match of the 2016 season they’ve now doubled that total.