Full-time: Drama at the RSC as Finn Harps suffer a heavy defeat 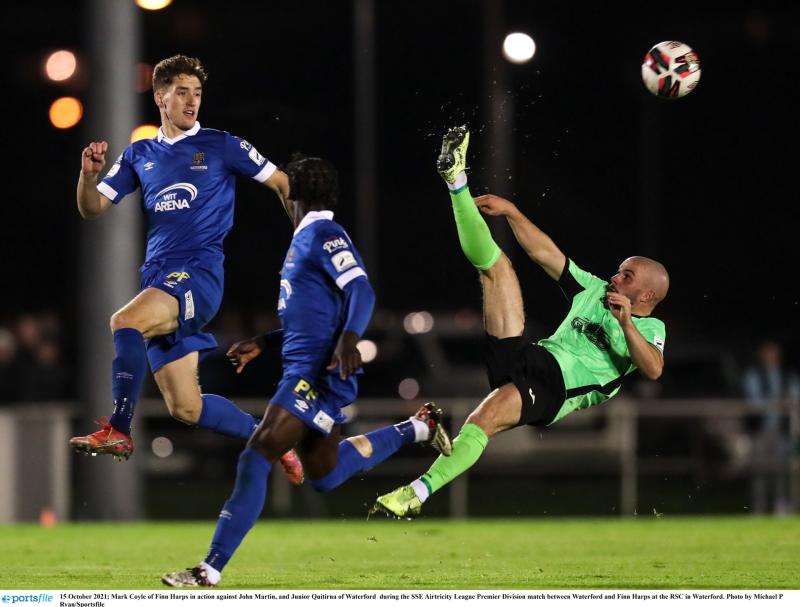 Ten man Waterford boosted their chances of staying up in the SSE Airtricity League Premier Division as they overcame Finn Harps in an incident filled encounter at the RSC.

And the battle to avoid the relegation play-off spot could well go right down to the wire.

This result means that Waterford remain ninth - and in the relegation play-off position - but they are now only one point behind Finn Harps, with six games still to play.

In a game that saw both teams finishing without their starting goalkeepers, Waterford went ahead through Phoenix Patterson on 19 minutes and made it 2-0 through Junior Quitirna on 68 minutes.

The home side then had goalkeeper Brian Murphy sent off for an incident with Kosovar Sadiki and Harps pulled one back with a Tunde Owolabi penalty on 75 minutes.

Harps pushed hard for an equaliser but Waterford grabbed a third on the break through John Martin, and the home side added a fourth five minutes into stoppage time through Quitirna after a fine move.

Story of the game

Given that the Blues began the contest four points adrift of Harps - and with a much inferior goal difference - there was no doubt that they were under more pressure to notch up a win.

The home side came into this contest having lost only once in their last seven games in all competitions - and that was against league champions and leaders Shamrock Rovers - while Harps had lost just once in their last eight league games.

Played in fine conditions in front of the biggest crowd of the season at the RSC, Harps showed five changes from the starting eleven that drew 2-2 with Dundalk. Kosovar Sadiki, Adan Foley, Dan Hawkins, Mark Coyle and Karl O’Sullivan came for the suspended Ethan Boyle, Ryan Connolly and Sean Boyd while Johnny Dunleavy was on the bench which was without Barry McNamee.

Harps’ hot-shot Owolabi conjured up the first chance of note but his effort was well saved by the experienced Murphy.

At the other end, Patterson cut in from the left and forced veteran Harps goalkeeper Gerard Doherty - who was once again selected ahead of Mark Anthony McGinley - to save.

Waterford took the lead on 19 minutes with a goal that really took many by surprise. Patterson got onto a wayward clearance from Ryan Rainey and from outside the box fired in a shot that squeezed just past Doherty and into the bottom corner.

While Owolabi continued to be a threat for Harps when they ventured forward, Patterson was buzzing with confidence and on 31 minutes struck a free-kick just over the goal.

Three minutes later, Harps had to make an enforced change as an injury to Doherty meant he had to be replaced by McGinley.

Waterford finished the half well with one finely worked move that saw a neat interchange of play before the ball fell for Shane Griffin but he could not get his shot on target.

Harps did have a chance on 43 minutes but Jordan Mustoe’s free sailed well past Murphy’s goal.

Owolabi was soon involved in the action again after the break, firstly being thwarted by a Griffin tackle and then seeing a decent effort just to the left of goal.

Harps were having the better of things when controversy erupted on 69 minutes. Kyle Ferguson pumped through a ball for Junior to chase into the box. McGinley appeared to have got it, but under pressure, the ball slipped out of his grasp, and Junior Quitirna popped the ball into the unguarded net, with appeals from some that the goalkeeper had been fouled.

More drama followed three minutes later when Waterford goalkeeper Brian Murphy was sent off for a foul on Kosovar Sadiki. Harps scored from the resulting penalty through Owolabi although substitute goalkeeper Matthew Connor got a hand to the ball, but could not prevent it going over the line. 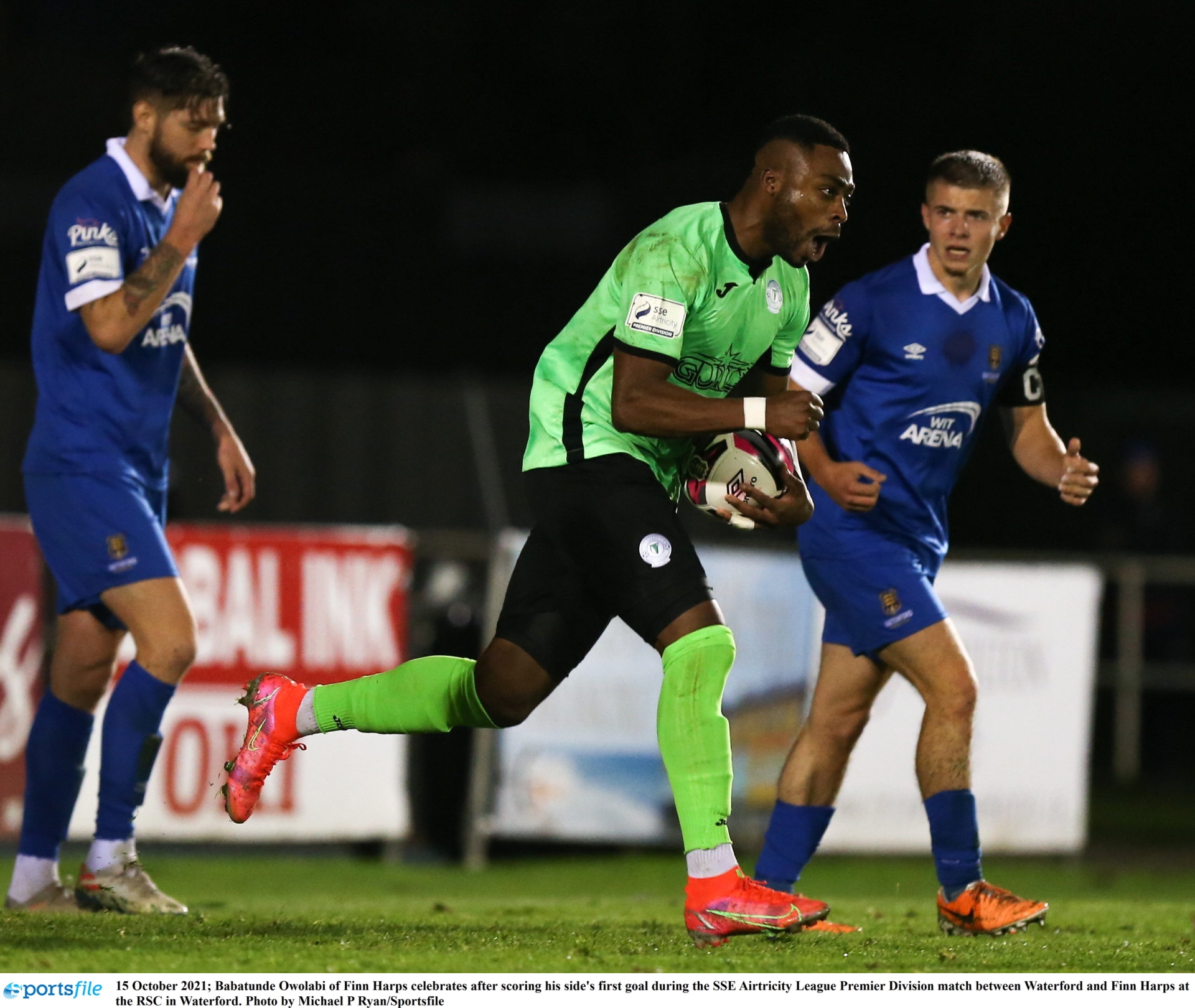 With 15 minutes remaining, Harps sensed that they could still get something from the contest.

David Webster had a header well saved by Murphy while Shane McEleney played neat ball ahead for  Owolabi but he was unable to get a shot in.

But Waterford sealed the issue late on with John Martin scoring on a counter-attack and Quitirna added the fourth after a sweeping move. 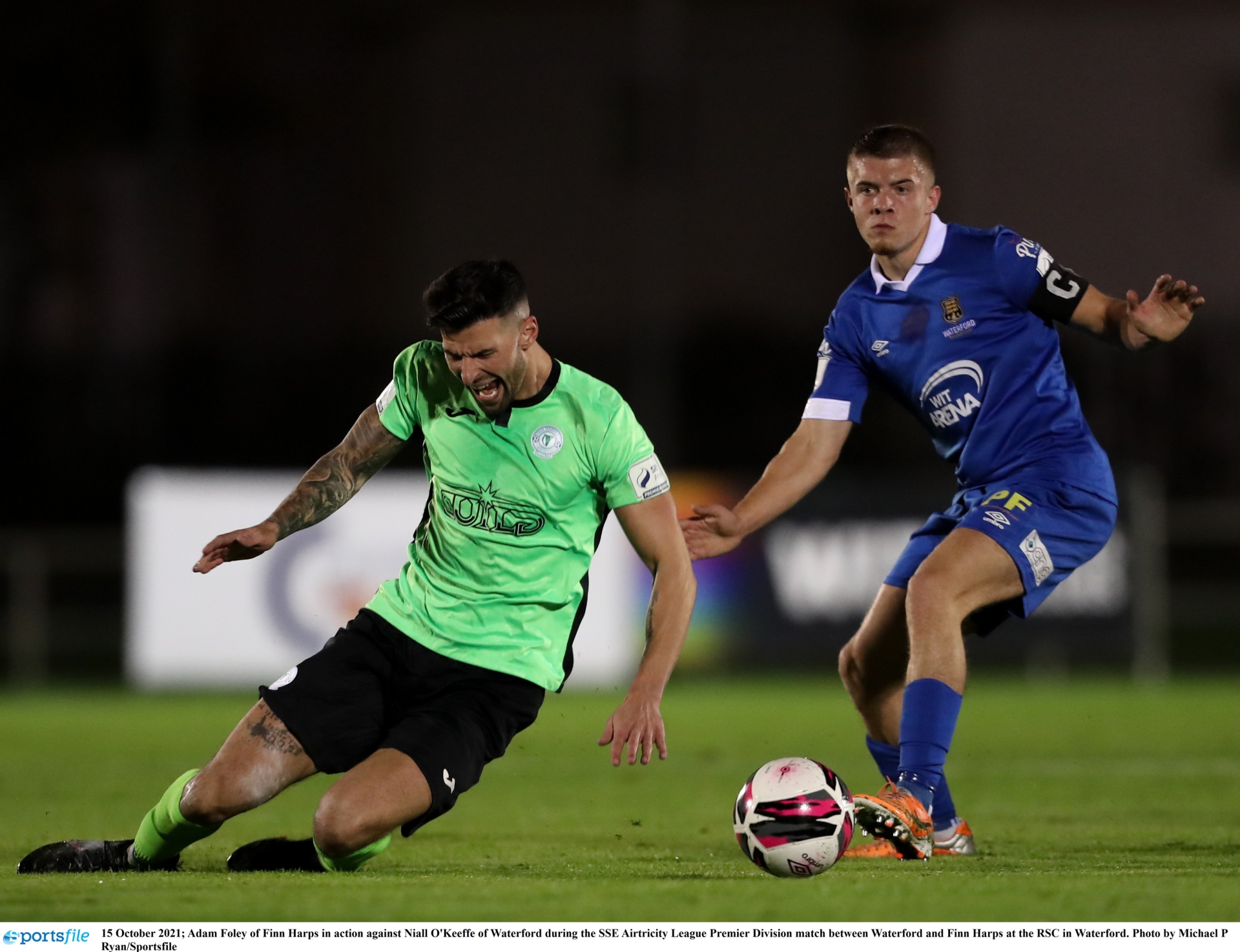