Tonight’s results in the SSE Airtricity League mean that Finn Harps and Derry City still have a lot at stake in their final games next weekend.

Harps drew 2-2 at Richmond Park. That could yet prove to be an invaluable point for the Donegal side in their battle to avoid finishing in the relegation play-off spot.

This result means Harps are one point above Waterford, who have two games left, the first one being this Saturday evening away to already relegated Longford Town. 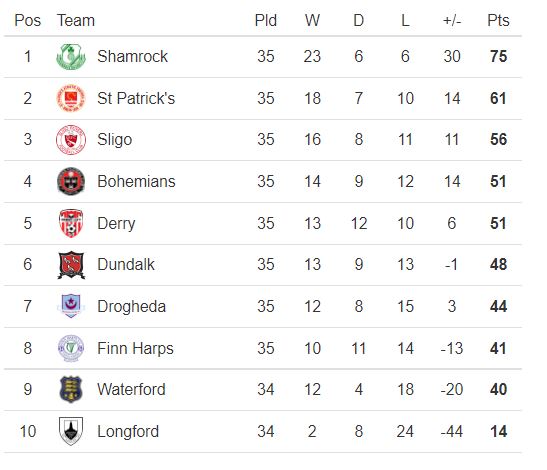 Harps’ final game is at home to Longford next Friday while Waterford will host St. Pat’s.

St. Pat’s, meanwhile, are assured now of being runners-up in the Premier Division behind Shamrock Rovers - and they also still have a FAI Cup final to look forward to.

Derry have an outside chance of European football next season following a  2-0 win, in what was their last home game of the season, over Sligo Rovers.

Bohemians, who beat champions Shamrock Rovers 3-1 at Dalymount Park, are on 51 points like Derry. Bohs have a superior goal difference +14 to Derry's +6.

Bohs complete their league programme next weekend with a trip to  a Sligo Rovers side that will finish third and who have already secured European football next season.

If St. Patrick’s Athletic win the FAI Cup, the team that finishes fourth (which will be either Bohs or Derry) will get into the Europa Conference League. Mathematically, Dundalk could still finish fourth but this can be discounted due to the huge improbability of what is required.

If Bohemians win the FAI Cup, then they will play in Europe next year, irrespective of their league position.

So, for Derry to get into Europe they will have to finish fourth and hope that St. Patrick’s win the cup.