Bonagee come from behind to record impressive win over Glenville 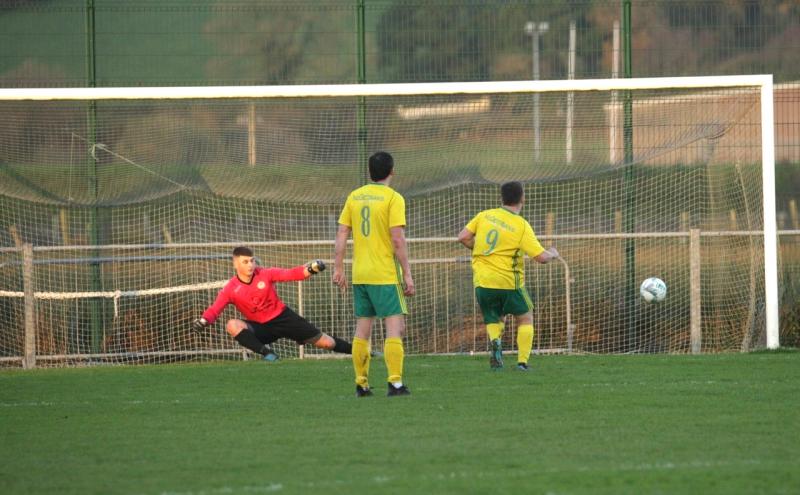 Tony McNamee scores from the penalty spot for what proved the winning goal PICTURE: THOMAS GALLAGHER

Bonagee United came from behind to deservedly advance from Saturday’s FAI Intermediate Cup 3rd round meeting with Glenville at Dry Arch Park.

But having passed up several good chances to score a third and kill this tie off, Bonagee almost got caught right at the death when Glenville went close to grabbing a last gasp equaliser.

As the game entered the 12th minute of injury time - there was a lengthy stoppage following an injury to match referee, Marty McGarrigle - Glenville were denied a goal thanks to a combination of defender Gareth Breslin and keeper Oisin Cannon who between them kept out David Conaghan’s effort.

As the ball spilled clear, Glenville appealed for a penalty following a challenge on one of their players but stand-in referee Packie Coll instead gave a free out, prompting an angry reaction from the visitors for whom substitute Ryan Russell was red carded.

A goal at that late stage would have been harsh on a Bonagee side who were the better team throughout.

The experienced Michael Funston, Gareth Harkin and Tony McNamee were all prominent throughout but there were good displays too from Mark Harkin at the back, Dan O’Donnell in midfield and Jack Parke at right back.

Parke will still be wondering how he didn’t get on the scoresheet in the second half after striking the woodwork twice and flashing a long range effort just wide.

It was the Leinster Senior League side who settled best and they went in front on 25 minutes - Niall Gleeson running onto Ryan Hughes’ pass to finish past Cannon.

But within four minutes, Bonagee were level. A short corner routine allowed McNamee whip the ball into the area and Funston rose to power his header to the net.

Bonagee then went in front six minutes before half time when McNamee converted from the penalty spot after Dylan Moore was adjudged to have handled in the box.

The Ulster Senior League side were much the better team after the turnaround. Time and again they created openings in front of goal - Funston unlucky to head wide from a Míchael Doherty free.

Then just before the hour, they were awarded a second penalty when Parke was hauled down in the area. But McNamee’s well struck effort was brilliantly saved by keeper Adam Kenny.

The Glenville keeper would deny Gareth Harkin with a smart stop and was also relieved to see efforts from Funston and Parke rebound to safety off his woodwork.

At 2-1, Glenville were never out of this tie and they almost sent the game to extra-time but David Conaghan was unable to find a way past Cannon with the game’s last big chance.