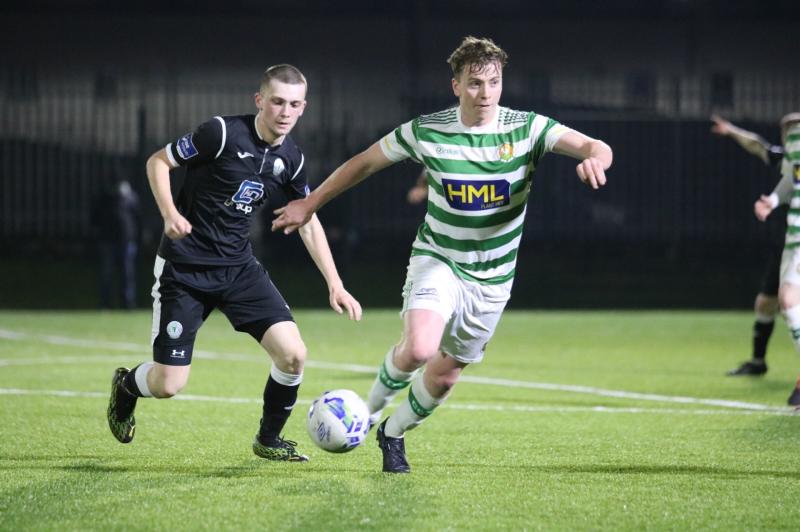 Jack Doherty of Cockhill on the attack against Finn Harps U21. Photo: Stephen Doherty

The eight-in-a-row champions go into 2022 in a strong position, four points off leaders Bonagee United with two games in hand. The last 16 of the FAI Intermediate Cup and, consequently, an FAI Senior Cup appearance await, not to mention the domestic cup competitions.

A 4-1 win over Finn Harps Under-21s on Thursday propelled further energy into Cockhill, who really showed their strength. Daniel Doherty started his first game of the season while there were appearances off the bench for youngsters Shane Doherty and Sean McCallion.

“That shows the depth and the quality of the squad we have,” Cullen told Donegal Live.

“It was good to get the game because we have some games in hand.

“We were down a few bodies, but the boys who came in did really well.

“It’s a difficult side to get into but if they get in and do well there’s no reason they can’t stay there.”

Cockhill have lost the services of Caolan McColgan, who has joined up with the Donegal senior football team, while Keegan Hegarty is poised to take up a scholarship in America next month.

Cockhill Celtic Youths are sitting second in the Jackie Crossan Premier Division of the Inishowen League and the signs are there that their success will continue.

Cullen said: “The youth team is going very well. There are some brilliant young players and they train with us on a Tuesday night.

“We got minutes into a couple of players, which was good as well.

“They’re stepping up to the mark and it bodes well. It’s difficult to get into this team and they know that.  They got opportunities tonight.”

The likes of Jimmy Bradley and Laurence Toland should return from injury on the resumption, while Cockhill are expected to add former Fanad United and Finn Harps player Seamie ‘Nanny’ Friel, most recently of Kilmacrennan Celtic, to the ranks.

Cockhill were ruthless in their dispatch of a youthful Harps on Thursday with Corey McBride, Garbhan Friel, Jason Breslin and Stephen Duffy all on target.

Cullen said: “We were very sharp in the first half and were relentless with our pressing. We were disappointed to conceded the goal, but it was a well-taken free-kick. It was a great finish.

“We probably could have scored another three or four. The same intensity wasn’t going to be there, but we were happy enough.

“January is a big month and we’re straight into it. We’re used to that and we’re looking forward to it. It’s been stop-start a bit so far, but it’ll be busier when we come back. We can improve and we will improve.”