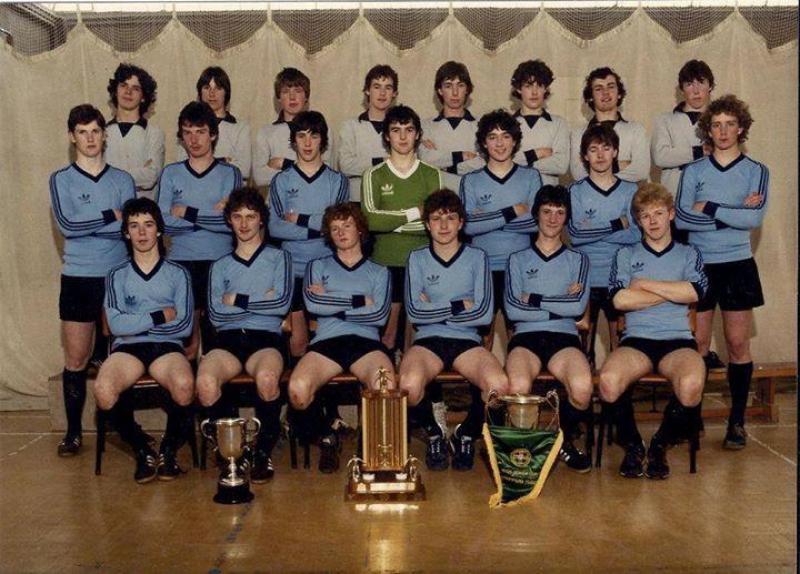 Forty years ago this weekend, Saturday May 1st 1982 was a red-letter day for Falcarragh Community School as they lifted the FAIS Senior Soccer Cup for the first time in their history.
Later that day Fr Seán Ó Gallchoir, a teacher at the school, would win an All-Ireland Scór title.

It was a tremendous achievement for Falcarragh and great reward for years of narrow misses in Fr Michael Sweeney's managerial career, equalling, if not bettering, Fanad's FAI Youth Cup victory in 1979.

The report read: "Martin Coyle had a magnificent tournament with his second half save against Summerhill when the sides were at 1-1, a major turning point. Paul McHugh and Joe Kelly, the two full-backs, played better than ever before with Kelly, in particular, curbing two very good wingers. Eddie McGinley was one of the key men of this success. He had two superb games with the bonus of scoring the decisive goal against Sligo.

"Joe McFadden was his usual competent self, sweeping elegantly with both feet. The midfield trio of McGonagle, O'Brien and Cunningham played their hearts out. Young John Cunningham was thrown in at the deep end when Paddy Ban Gallagher was declared unfit but the Killybegs second year student did very well. So did captain Paul McGonagle, especially in both second halves.
"Wee John O'Brien provided the class that was needed in this sector and did some glorious thingns.
"There is no doubt but that Falcarragh's most impressive unit was the front three. Sean Ferry excelled with good running and splending crossing. Hughie McFadden continued his tremendous form with this wonderful mix of skill and fighting spirit. And John Kelly probably emerged as the player of the tournament as he tormented the Sligo and Waterford defences with his close skills, his superb control, his fine laying-off and his deadly finishing.

"But it was essentially a team effort. Subs. Aidan Boyle and Gerry Earlyt made their contributions too. As did Falcarragh's avid band of supporters."

In the semi-final it was 1-1 at half-time after John O'Brien gave Falcarragh the lead. After Coyle's save Eddie McGinley came forward to play a one-two with Kelly to hit the second and Kelly made the third also, sending Mouse McFadden, who scored a tremendous goal.

In the final Kelly headed home two goals, both from Sean Ferry crosses, in the opening half as Falcarragh led 2-1 at the break. It was close until the last quarter when Kelly completed his hat-trick and Sean Ferry added the fourth.

Johnny Kelly - hat-trick hero of final
"That was a very, very good team. When you look at it, Sean Ferry, myself and Big Eddie (McGinley) went on to play senior football.
"We grew up together in Falcarragh. We were all mates there. I was a boarder; Eddie was a boarder. There was a big Killybegs connection in Falcarragh as well with the Cunninghams and Barry McGowan.

"We won the U-16s a few years before that in Dublin, we beat a team from Limerick in the final. So it was a carry on from that," said Kelly, who added that it was a first All-Ireland senior cup for the school.

"Yeah, it was a big thing, but I think it was more for Fr Mick (Sweeney) than anything else. Because previous to us John McElwaine and them, they had won an U-16 when they beat Summerhill, Sligo in the final. Then we won it a few years later, but we had never won a senior; we had been beaten in semi-finals and what not, so it was a big achievement for the school," said Kelly.

Johnny Kelly was a nephew of Fr Mick's and I put it to him that he had to put in a wee bit extra. "Getting three goals was the best I could do," he quipped.

"We beat Summerhill of Sligo in the semi-final and De La Salle of Waterford, they beat the Dublin team. They would probably have come in as favourites.

"Ach, but we would have genuinely fancied ourselves because we had a lot of good players. Unfortunately, one of the better ones was John O'Brien, who we lost last year. He was a very good player."
Kelly would go on to have a good soccer career, although he says himself he probably started too young and also wasn't that fond of training.

"When the Ulster Senior League was founded we all came back together (with Fanad United). Again there was a huge Falcarragh connection with Charlie McGeever and Bosco Gallagher and all them. We had a lot of success then.

"Barry McGowan came up and played with us also. He was a fabulous footballer and could have played at a higher lever. But Barry and the Cunninghams were drawn to the Gaelic.

"John Cunningham, even though only a second year, was a hardy lad. He was as tough as nails and he could take care of himself. Barry Cunningham was a very good player as well with a good left foot on him.

"There was a good bond among that college team and it carried on to Fanad United.
"It happens every so often that you get a team that are together for a while and they dominate and then it passes on. It is the same in soccer or Gaelic.

As for his career in the game he says: "Do you know the biggest problem I played far too soon. I played in the Fanad senior team when I was 16. I more or less stopped playing when I was 28. I played a couple of seasons with Cranford in the Donegal League and I really enjoyed that before I finished up. Training was never my forte and when you use the couple of yards of pace, it's time to stop.

"But I did enjoy it," says Kelly, who now lives in Letterkenny and is a postman in the Rathmullan area.
Back in 1982 the sharpshooter was known as John, and there is a funny insight into how he became known to all outside his family as Johnny. "Do you know how that came about. There was a lad from Letterkenny, a good friend of mine, who was the same name, John Kelly. We played in a Donegal Youth team and there was an occasion when John Kelly crossed the ball and John Kelly scored a header.

"It was the late Colm McBride who started calling me Johnny and it stuck. At home everybody calls me John, but when I go out and meet people I played football with it's all Johnny." 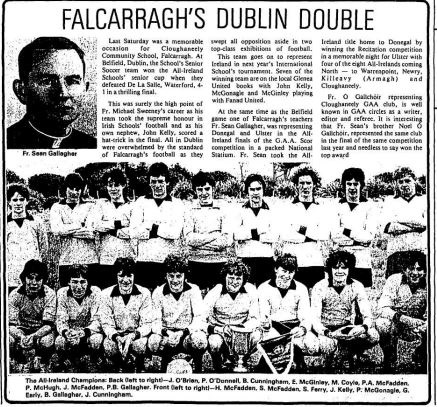 How the Donegal Democrat reported on front page

Paul McHugh from Knockfola was right back on the winning team and he is now a Detective Garda stationed in Donegal Town.
His memories of the time:

"My earliest memory is that Ireland played Holland before us; it was a senior international but it was a Deaf and Dumb international. And we couldn't get over the skill and technique of the players. I think it was the ref who was the most exhausted player after the game because he had to run after them all to signify a free or whatever.

"There are very little memories of the game itself. We won 4-1 and I think Johnny Kelly got three and Hugh Jordy McFadden got one. UCD at that time, I think it was surrounded by a high wall and I think in the last 15 minutes the ball was kicked over the wall more times than enough. If you were on about gamesmanship . . .

"Fr Mick (Sweeney), he would amassed a fair squad of players at that time, but he used players very, very well. Don't forget they had contested the final the previous year in 1981 and it was just reward for the likes of Johnny Kelly, Brian McGonagle, Brian 'Chippy' Gallagher, they had had stayed back; Eddie McGinley as well.

"Also it was a great couple of years for the Donegal schools. Falcarragh contested in '81 and lost; Falcarragh won it in '82 and I think myself and Paddy Bán Gallagher were invited to a Dungloe Debs in '82 and ended up in Limerick cheering on Declan Bonner and Dungloe to the schools' final, which they won.

"It was good memories. The team are scattered all over the world, from Australia, Alaska, some in Ireland and it would be remiss of me if I didn't mention a few people that aren't here.

"Wee Donal Beag McCafferty, Donal was a dancer, not a footballer, but he was a great supporter of that '82 team and tragically, he lost his life shortly after that.

"An integral part of the team at that time was Wee John O'Brien, who passed away recently; a great, great player. Unfortunately, he lost his battle.

"Another two people come to mind as well. Frankie Pat Gallagher would have been part of that Dungloe '82 team. Frankie would have been a larger than life character and another part of that team was Paddy Murray O'Donnell, both gone to their places in the sky," said McHugh, who added that many of the Falcarragh team went on to play with Fanad.

"Johnny Kelly, Sean Ferry and Eddie McGinley would have won the FAI Intermediate Cup with Fanad while John and Barry Cunningham went on to win an All-Ireland with Donegal in 1992.

"So there was a fair squad of players, some went on to be involved in management; Gerry Early in Arranmore, myself in Donegal Town and Hugh Jordy involved with Glenea," said McHugh. 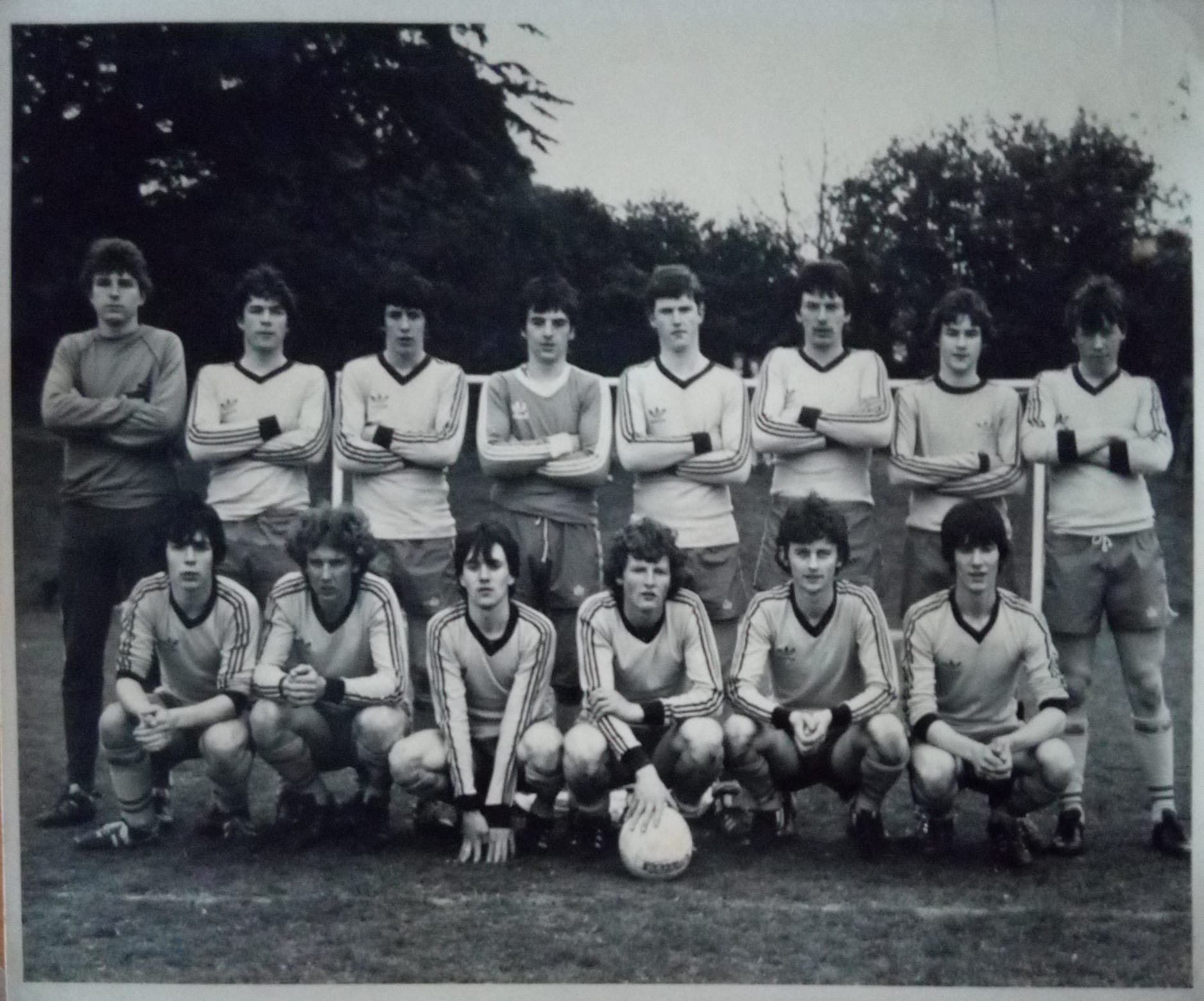