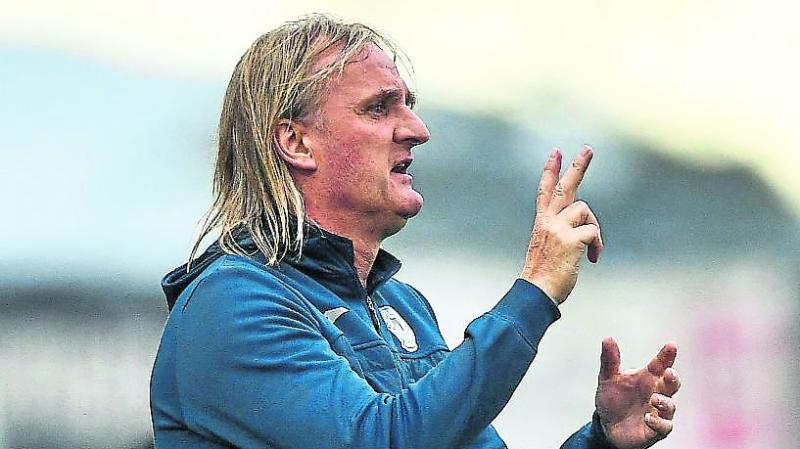 Finn Harps manager Ollie Horgan has confirmed that he’s hoping to make a number of new signings once the summer transfer window opens on July 1.

Harps return to action this weekend with a trip to play neighbours Sligo Rovers at the Showgrounds as the SSE Airtricity Premier Division season enters the second half of the campaign.

However, with the Donegal side sitting second from bottom in the standings, and nine points adrift of Drogheda above them, they are under real pressure to start gathering points before too soon.

And speaking ahead of the game, the Harps boss said he is planning to bring players in and he confirmed that they won’t be from within the League of Ireland.

“We have to bring in a number of players,” he said.

“They won’t be high profile players by any means, they will be lads that we’ll need to work very hard for us to try and survive.

“We need people to buy into it and first and foremost, we need lads that want to be here.

“We’ve identified a lot but obviously a lot of the higher profile players are not within our reach. The ones we are looking to take in are good lads that will improve us. How much they improve us only time will tell but please God they will.”

Asked if the players he has targeted are with other League of Ireland sides, Horgan replied:

“We don’t seem to be able to attract players from other League of Ireland sides.

“Obviously the money seems to be back within the Irish League and in the League of Ireland itself. We find it very difficult to attract from within our own league.

“They’ll be players from slightly further afield that want a chance.”

For now however, Horgan must plan for the games against Sligo Rovers and St. Patrick’s Athletic (h) with what he has.

Harps will be without two key players in Bastien Hery and Ryan Connolly this weekend. Both players are suspended as are the Sligo duo of Greg Bolder and Adam McDonnell.

“Sligo might have a bigger panel which might help them get over the fact that they are missing a couple of players,” Horgan pointed out.

“It will be a little bit more difficult for us on the basis that it’s two very experienced players [Hery and Connolly] we’re missing. The two of them were very good in their last outing against Derry.

“But it’s been the case all year. Can we just blame ourselves for the discipline? To a degree, yes and I think Bastien will be the first man to put his hand up for the sending off against Drogheda.”

Horgan however, insisted that his team could argue that a number of yellow cards picked up this season were ‘soft’.

“A lot of people would like to blame me for it, and over the years they would probably be right,” he said. “But that’s certainly not the case at the moment.

“Let’s see what happens. We are down bodies. The window doesn’t open until July 1 to try and get new bodies in so we’ll be down to the bare bones on Saturday and probably for the St Pat’s game after that.”

This Saturday’s game will be Harps’ first competitive outing since the Derry match - a gap of 22 days. Horgan said the length of time without a game is not ideal, and he spoke of his disappointment at the cancellation of the Bohemians game just days before the fixture. The match, due to be played in Ballybofey last Friday night was postponed after Bohs keeper James Talbot was called up into the Republic of Ireland senior squad.

“Look, we’re very disappointed that the Bohs game was cancelled,” he said.

“The league decided that it wasn’t going ahead. So be it, we had to take it but we lost out on a game and a gate on a Friday night, as opposed to another game and a lesser gate on a Monday night through the season.

“But that’s out of our control and by the looks of things, very little is within our control.

We’ve got to grin and bear it because I don’t think roaring and shouting will make any difference to the people in power.”