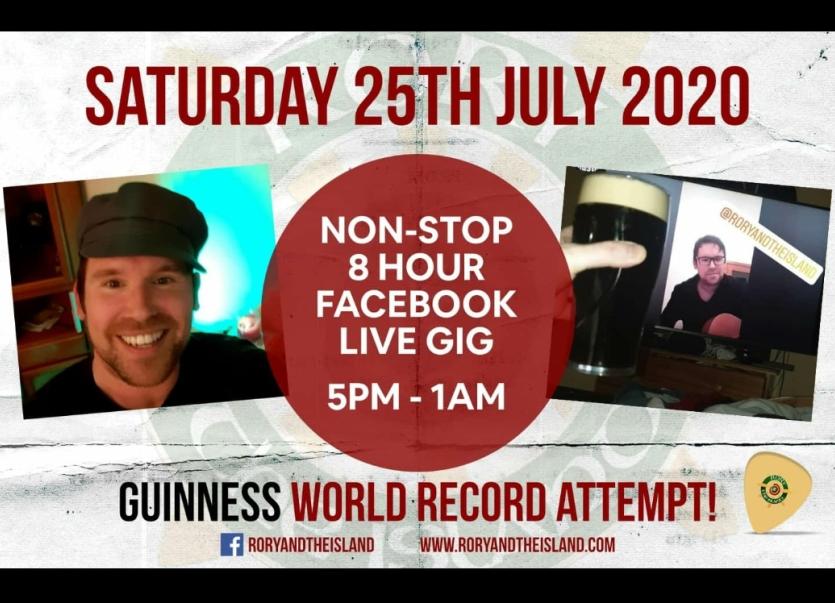 An Irish musician is attempting to set a new world record this evening.

Donegal native Rory Gallagher has always been up for the challenge - and now he is hoping to earn a place in the Guinness Book of Records by singing online for the maximum eight hours permissible on a facebook live stream!

Sharing this link will be a big encouragement for him. You can see him on this link: https://www.facebook.com/RoryandtheIsland

Earlier this week, he explained: “I googled Guinness book of records and the longest solo live concert is held by "Gonzales", a Canadian rapper/producer who gigged for 27 hours straight in 2009."

“However, I was shocked to find that no solo acoustic artists have played the entire eight hour digital time window allowed on facebook. A few DJs have,  and a few multi act live stream charity concerts have... but never a solo act just singing continuously.”

During the week, he told the Donegal Post newspaper: “I am sure I might go hoarse, I have never sung for more than four hours straight, but it's worth a try!

He acknowledged that “ hydration and dizziness may be a problem” but that won’t be a deterrent.

He recalled: “I always enjoyed doing mad stuff like this and it takes me back to 2001 when my old band the Revs set a record by playing a quick gig in 26 Irish counties in the space of 3 days to promote our top 10 single "Wired to the Moon".

For many years Kilcar native Rory and his Scottish wife Cara ran the hugely successful Island Bar in Lanzarote, but they are now based In Edinburgh where they had just embarked on an exciting new business venture with a new bar when the Covid-19 pandemic broke out.

He has around 25,000 followers on facebook. Many of them have been logging on this evening.

Rory has been using the music project name "Rory and the Island" since 2010 to save any google confusion with the great blues guitar legend Rory Gallagher.

In recent years he has written a number of songs, many of which became firm favourites amongst visitors to the thriving bar in Lanzarote, not least hits like "Mad Dog Coll", "Ryanair Blues", "Champagne Lifestyle on Coco-Cola wages", "Waterfall" and "Jimmy’s Winning Matches" (which amassed over 1.1 million views on youtube).