RORY GALLAGHER NOT TOO UNHAPPY 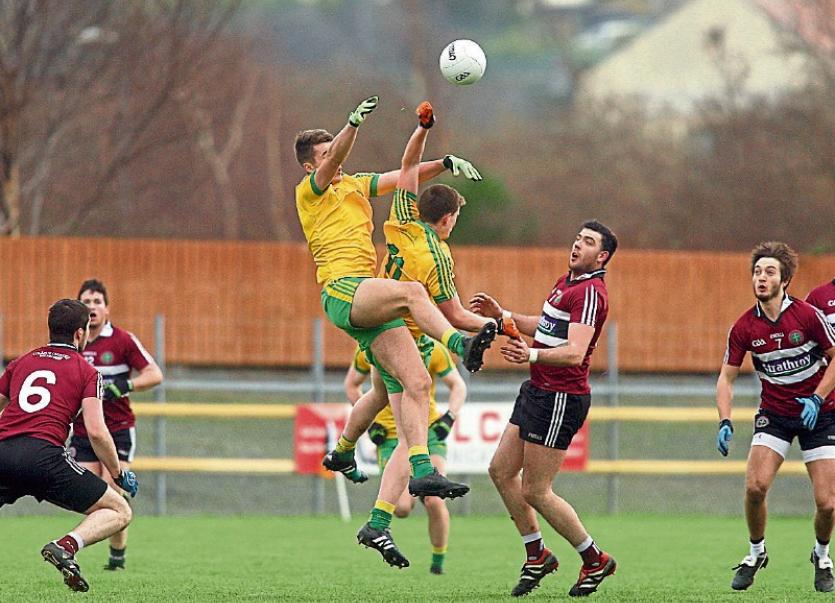 Rory Gallagher is a winner but his demeanour after yesterday’s defeat to St Mary’s suggest he was not going to lose too much sleep last night.

Given the number of new players that he had in his starting 15, the Donegal boss insisted that yesterday’s game will prove a great learning curve for all the new faces.

“But it is early days yet and as we told the young lads when they came in there was going to be ups and down. And believe me, unfortunately, there will be bigger downs than losing a McKenna Cup game in January to St Mary’s.

“Look we would have prefered to have won the game but being honest I’m not too disappointed at this stage of the season.

“It is a good wake up call for all the lads and a good marker for the young lads; a bit like the Monaghan game here in the league last year was as well. It will give the young lads a good idea of what they will face down the road.”

As for the game itself the boss felt while Donegal were not playing out of their skins it was a game they should still have won.

He insisted they had the chances and really left the game behind them in the third quarter when despite being on top they did not put the Students away.

“We dominated early on and then let them into the game with a soft goal that kept them in the tie and from that point of view it is disappointing to lose the game.

“They put a lot of men behind the ball and we struggled to break them down. But it was a good learning curve for the younger lads. It is a big step up for them and they will have learned a lot.”

And he also insisted that it was not a case that Donegal had taken the St Mary’s challenge lightly.

“I watched St Mary’s against Fermanagh on Wednesday night and I felt that they were a decent side. They ran Fermanagh close in that game and, in fact, were five points up when they had a man sent off.

“They are a good side as they showed there today and to be fair to them, too, they are in good shape for the time of year.”

The first goal was a big blow in the manager’s eyes and allowed them to get into game during a period Donegal where dominating and in control.

“I thought for the first goal that they had got away with overcarrying further out the field but the referee let them play on. But in fairness it was not well defended from our point of view.

“It allowed them into the game and from then on it was difficult to shake them off.”

Michael Murphy, Stephen McBrearty and Neil McGee were introduced for the second half and both McBrearty and Murphy missed chances for scores. And Odhran MacNiallais was denied a goal by Rory Burns with a good save.

“Odhran (MacNiallais) in the first half, I think he should have tapped over the bar and as for the chance in the second half in fairness to the goalkeeper it was a good save. But that is football, you take your chances or you pay the price and we did that today.”

But despite the defeat the manager once again felt the new boys did well, especially Red Hugh’s Stephen McMenamin, who made his debut.

“I think Stephen had a good game. He battled well and in fairness to him he has not done much training. He was out for eight weeks.

“But I felt he battled well as did the others and they showed today and the last day against Down that they were not out of place.

“They were playing a St Mary’s side that had a number of intercounty footballers and I feel they did well against them.”

Donegal face unbeaten Fermanagh on Wednesday in what is a must win game for Donegal if they are to make it to the knockout stages of the competition and at least one extra game ahead of the start of the Allianz League at the end of the month.

“Regardless how today’s game went Wednesday night’s game with Fermanagh was going to be a crunch game and that is how we will be approaching it.

“We will be going all out to win it.”

Martin McElhinney and Anthony Thompson are expected to return for Wednesday night’s clash in Enniskillen.

“Martin and Anthony were fit to go today. But we decided we wanted to give the young lads another chance. They should be okay for Wednesday night, if not starting at least coming off the bench.”