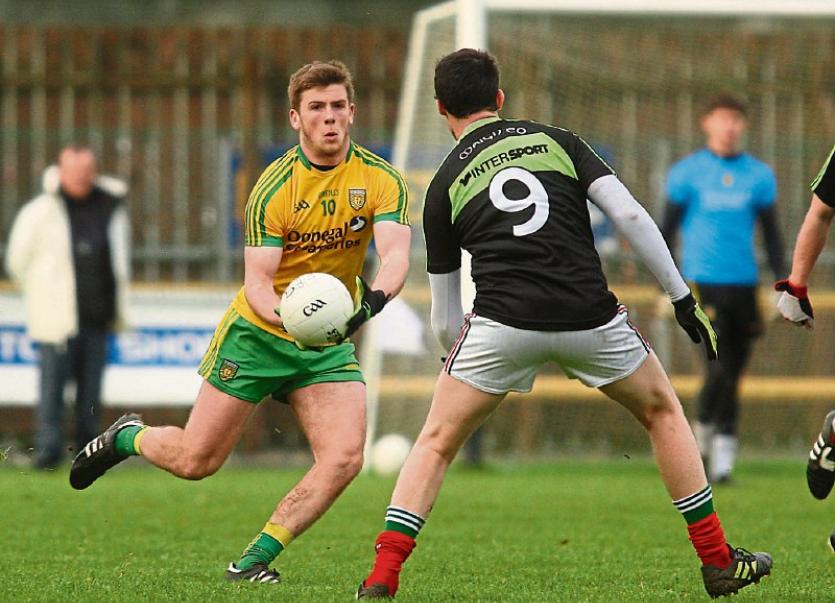 Donegal manager Declan Bonner was in much better mood after Saturday’s game than he was seven days earlier following the second round defeat to Fermanagh.

With players back from county senior and college duty, he fielded his strongest team to date in the competition.

“It was good to get the lads back from the senior squad today because that made a big difference,” said the Donegal boss.

“Otherwise to have to play against that Mayo team with a weakened side we would not have stood a chance.

“Mayo are a quality side. They won the minor All-Ireland three years ago. We knew it was going to be a good quality match and it is good to get it at this stage of the season.”

Donegal took a while to settle as Mayo got off to a flying start and pinned Donegal back in their own half for the first quarter of an hour.

“We did not kick our first score until the 20th minute and I think it was just a matter of getting the boys to  find their bearings. This was their first game together.

“We made a lot of basic errors in that first 20 minutes. We gave the ball away cheaply. We had  a lot of turnovers; we had a lot of fumbles and our decision making was very poor.

“But once we got that first score on the board things changed and we had a really good last ten minutes.

“We kicked five points to Mayo’s one and we went in 0-5 to 0-4 in front at half-time and that was not the way it was looking after 20 minutes.

“We got a firm grip on the match in the third quarter and a fortuitous goal from Stephen McBrearty and we went five up.

“But fair play to Mayo, they came back and they scored a top quality goal; as good a goal as you are likely to see in O’Donnell Park for many a year from Liam Irwin.

“They drew level shortly after and all of sudden it was game on again and I have to say the lads showed great character.

“Mayo had the breeze and there was a couple of minutes to go. But we took the fight to Mayo and Caolan McGonagle was wide from a free before Ciaran Thompson led by example and kicked a massive point to win the match.

“ I would describe the performance as patchy. We just need to play for longer periods of the game if we are going to make an impact in this year’s championship.

”We have a lot of work to do over the next six weeks to be ready for Derry or Antrim and that is why I would love another quality game with Mayo, in the final. There was a bit of an edge to that game at the end and that is what you want at this time of the year,” said the Donegal boss.