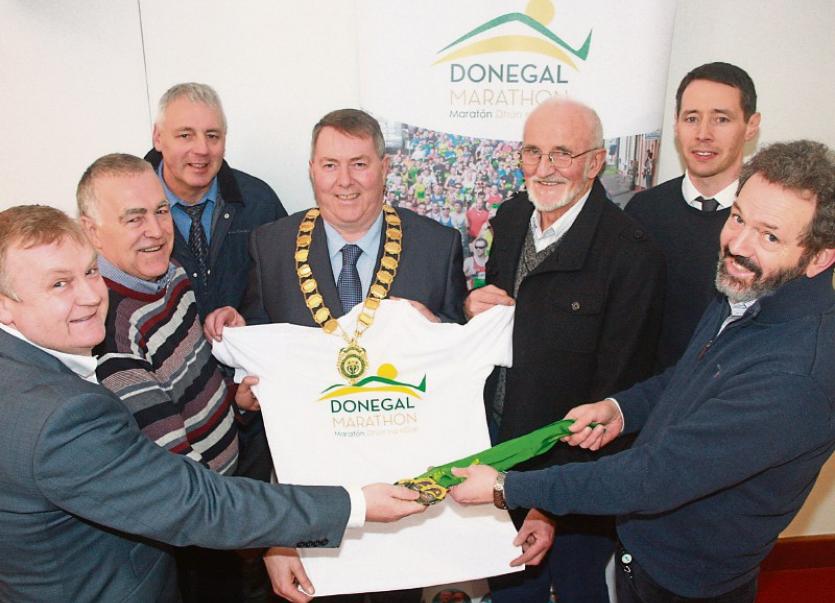 The official launch of the 2016 Donegal Marathon took place at the Aura Leisure Centre, Letterkenny earlier this week.

The event was officially launched by Municipal District Mayor Gerry McMonagle and Municipal District Councillor, Jimmy Kavanagh. Former Olympic athlete Danny McDaid was also in attendance at the launch, alongside a number of his fellow Donegal Marathon committee members. Registration for the 2016 event is now open and participants can register via www.donegalmarathon.ie.

Last year, over 700 people participated in the Donegal Marathon and organisers are expecting an even bigger turnout in 2016. Commenting on the launch, Chairperson of the event, Dessie Larkin said: “Since it was re-established in 2014, the Donegal Marathon has gone from strength-to-strength. We’re confident of an even bigger turn-out this summer for both the full and half Marathon.”

Adding to this, former Olympian and winner of the 1983 Donegal Marathon, Danny McDaid, said: “The Donegal Marathon was dormant for over thirty years but after a lot of hard work, it’s great to see that the event is now in its 3rd year and growing. The committee has put in a tremendous effort into ensuring the success of the event and we would urge as many people as possible to get out and take part, whether it’s walking or running the full or half Marathon.

“I’d also encourage anyone considering running the Marathon to check out the official Donegal Marathon website. It’s an excellent resource for anyone training for the event with details of the route and a host of training schedules for runners of all levels, from beginners to seasoned athletes,” said McDaid.