Donegal Mini-Stages Rally is back this weekend S 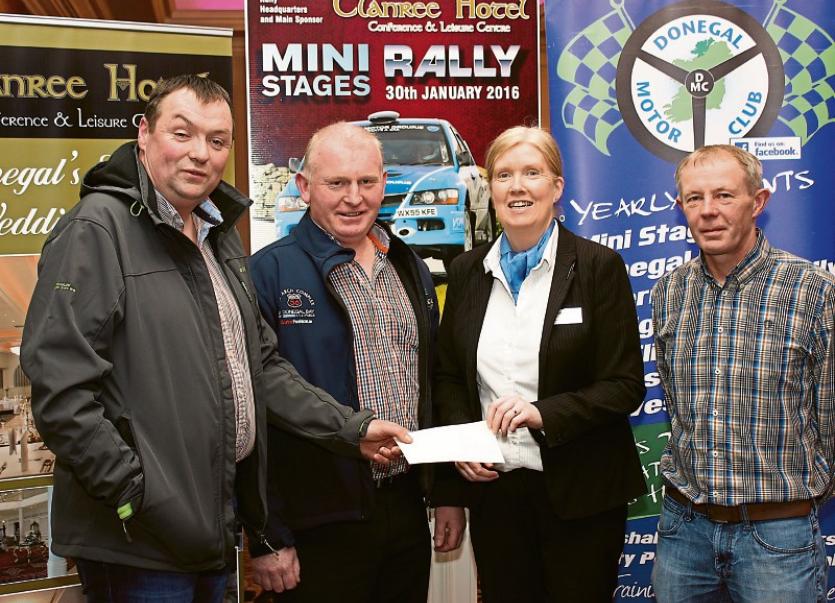 Donegal is to host the first event of the Irish Rally season with the staging this weekend of the Clanree Hotel, Donegal Mini-Stages Rally.

The rally returns on Saturday, January 30th, after a three year lapse and is based at the Clanree Hotel in Letterkenny.

The event is confined to Donegal Motor Club members and has already attracted a large entry. As of last Tuesday night’s launch in the Clanree Hotel, the entry had hit the 105 mark with entries still being taken.

Karl Reid is the Clerk of the Course, a first for the Letterkenny man, and he has selected two classic Donegal stages, Dooish and Glenmaquin, with three loops of each.

“We have two good stages which run to the maximum 90km and we have a great entry,” said Karl at the launch. “We have really been overwhelmed with the level of interest and entries, not alone from local members, but also from members outside the county,” added the Clerk of the Course.

“They are fantastic stages. Dooish has not been used since 2012  and you have to go back to 2007 for the last time Glenmaquin was used.”

Alistair Fisher and Gordon Noble, in a new Ford Escort R 5+, are the number one seeds with Martin Doherty and Damien McCauley in a Mitsubishi Evo 9, last winners of the rally when it was run in 2013.

Desi Henry, Skoda R5+ and Brendan Cumiskey in a Fiesta R5+, will be in the other two new R5+ cars in the rally and how they fare against the WRC cars will be watched with great interest.

Other local favourites inside the top 20 are Manus Kelly at 12, Damien Gallagher at 15, and Damien Tourish at 16, all in Escorts.

Double winning Irish Rally champion Donagh Kelly will swap his Fiesta WRC for an Escort Mark 1. Donagh, who is seeded at 43, will be joined by his son Eamonn calling the notes.

Mechanical scrutineering is on Friday at Donegal Commercial Vehicles, Drumkeen from 3-8pm. The competitors' safety briefing is in the Clanree Hotel at 8.30am  on Saturday with the first car off the ramp at 10am.