DONEGAL HIT TOP FORM TO BLOW DOWN AWAY 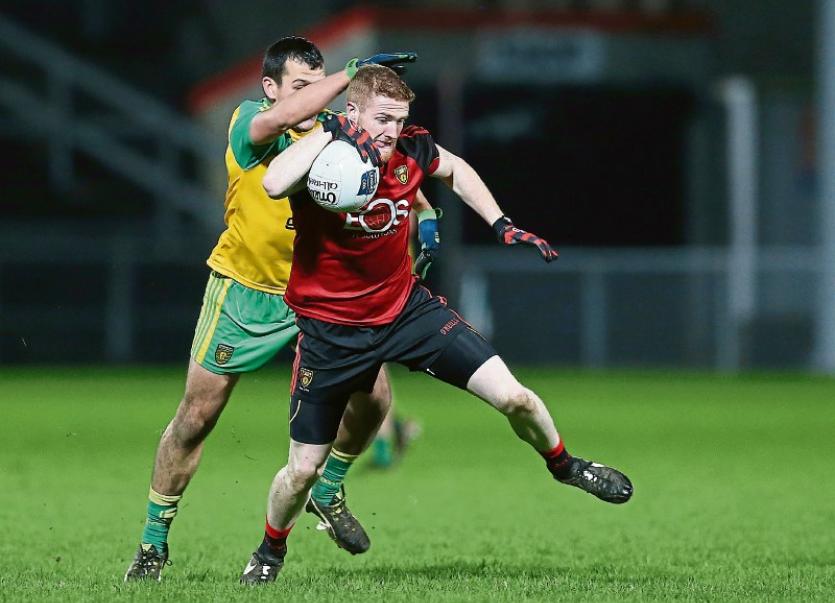 With their best league display in many a year, Donegal blitzed Down in Newry on Saturday night to end a seven year drought for an away win in Division One.

The 17 point winning margin did not flatter Donegal who, apart from the penalty incident in the opening half, had an almost flawless performance on a night when the ball seemed to bounce for them.

They were helped by a Down side that looked toothless and the big difference between the sides was handling and passing. Donegal were very sharp and their goals were finished in clinical fashion. Donegal haven’t notched such a tally very often, but what was impressive was the ease with which they executed.

The game was effectively over when Donegal struck for two goals early in the second half; Ryan McHugh palmed home the first goal in the 40th minute and two minutes later Patrick McBrearty fielded and turned his man to drive home to put Donegal ahead by 2-9 to 0-4.

Five unanswered points in the last 12 minutes of the first half saw Donegal in a strong position at the break.

It was an eventful opening half with referee David Gough the centre of attention, handing out two black and three yellow cards.

It looked as if the game was taking a turn in favour of Down after 19 minutes when a short kick out by Peter Boyle to Eamonn Doherty went awry and Neil McGee had to slide in to prevent Ryan Johnston scoring a goal. McGee was black carded and Boyle redeemed himself, making a magnificent stop from Donal O’Hare’s penalty.

Donegal were leading 0-4 to 0-2 at the time after a good opening period that saw Ciaran Thompson loft the opening point on three minutes.

Michael Murphy was in excellent kicking form throughout the opening half, lofting the second Donegal point from 48m after Ryan McHugh was fouled.

Arthur McConville pointed a free for Down before Patrick McBrearty had Donegal’s third after a penetrating pass from young Michael Carroll to Anthony Thompson.

Conaill McGovern had Down’s second point before the penalty drama. Arthur McConville had Down’s last point of the half seconds after the penalty miss, but then Donegal took control. Murphy pointed after the lively Eoin McHugh was fouled and McHugh was heavily involved in the next point, making a great block and then breaking through only to see the ‘keeper get to the ball before Patrick McBrearty but from the sideline Murphy found the range off the crossbar.

Down then lost Joe Murphy to a black after an innocent looking trip while in the last minutes of the half Michael Carroll was fouled for Patrick McBrearty to point a free and Murphy added two more frees to leave Donegal in a healthy position at the break.

Donal O’Hare (who proved to be Down’s only scorer in the second half with four frees) had the opening point of the second half but they were rocked with a two-goal strike. Ryan McHugh started and finished the first goal, cutting through the middle and linking with Ciaran Thompson to palm home.

Then Thompson’s long delivery was fielded by Patrick McBrearty, who turned Darren O’Hagan and rifled to the corner of the net.

It was a matter of keeping concentration after that and Donegal were up to the challenge, even it was a weak one. However, there will be concern that they lost both Michael Carroll and Eamon McGee to black cards, while Down had their chief scorer, Donal O’Hare, shown red four minutes from the end.

Frank McGlynn added a Donegal point and substitute Leo McLoone had a double inside a minute while Michael Murphy kept the scoreboard ticking with immaculate free-taking.

Rory Gallagher was able to mix the old with the new from the substitutes bench with Neil Gallagher and then Rory Kavanagh getting big welcomes while Stephen McBrearty and Caolan McGonigle were also introduced.

The only downside was watching Eoin McHugh limp off near the end although it may have been precautionary. With all their subs used, Donegal had no replacement for either Eamon McGee (black card) and McHugh, but were unduly concerned and Patrick McBrearty brought the curtain down on the scoring in added time.