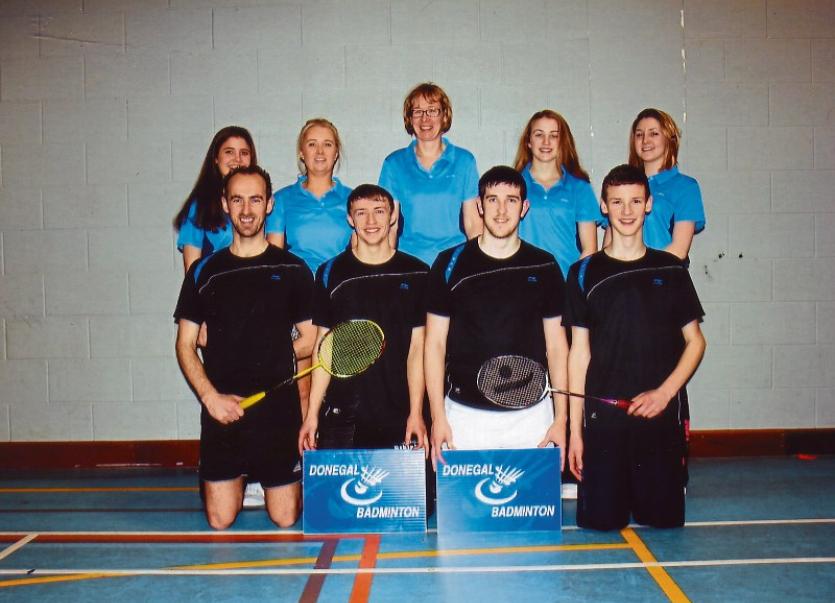 The annual competition, under the direction of Competition Secretary, William Love, was supported by Northern Auto Parts, Donegal Town and Michael Murphy Sports, Lettterkenny with a 10 am. start.

In the early matches of the morning, Donegal A beat Donegal B 7/0 and North West secured a 5/2 win over Coleraine and Dt.

Second round matches saw Donegal A beat Coleraine 6/1 and North West added on the same number of points to their total with a 6/1 win over Donegal B.

The fight for the Division 2 title saw Donegal B. , with many new faces making their first appearance on the Co. Donegal senior squads, take on eve very experienced Coleraine and District side.

Coleraine hit back winning both ladies doubles, as expected. Fiona and Janice giving a very good account of themselves, Thrisa and Ciara winning the pt. 21/19, 21/15. Donegal B young kids on the block, Emma and Kim put in an outstanding performance in 2nd. ladies , only pipped at the post 15/21, 21/15, 17/21, by the very experienced Ulster players Alison and Rachael.

The battle for the Jim Taylor Cup 2016 was nearing a conclusion, as North West, with their very strong men, took on the defending champions Donegal A.

Donegal ladies hit back, Kathy Ann and Laura beat Barbara and Gillian 21/10, 21/11 in 1st ladies, however in 2nd ladies Hazel and Siobhan had to work very hard to overcome their fellow Dunfanaghy club members Ashling and Carol 21/18, 19/21, 21/17.

Mixed Doubles: Ian Macbeth, Donegal A team captain, with Kathy Ann, secured a very valuable and title winning pointin 1st mixed, holding of a very strong challenge from Barbara and Deane, 21/19 in the first game before Kathy Ann and Ian killed off the set 21/8 in the second game.

North West 4pts. Donegal B. 3. pts. North West won the match but lost the battle for the Jim Taylor Cup.

William Love, competition director, congratulated all the players and teams on their outstanding contribution to the tournament.

A special thanks to all the Donegal squad players for providing sandwiches and home baking for the tea/coffee for all the competitors and visitors, Northern Auto Parts, Donegal Town and Michael Murphy Sports, Letterkenny for their support; management and staff of the Aura, Letterkenny, for all their assistance and Co. Donegal Senior team selectors Ian and Alan Macbeth.