Colaiste na Carraige through to semi-final 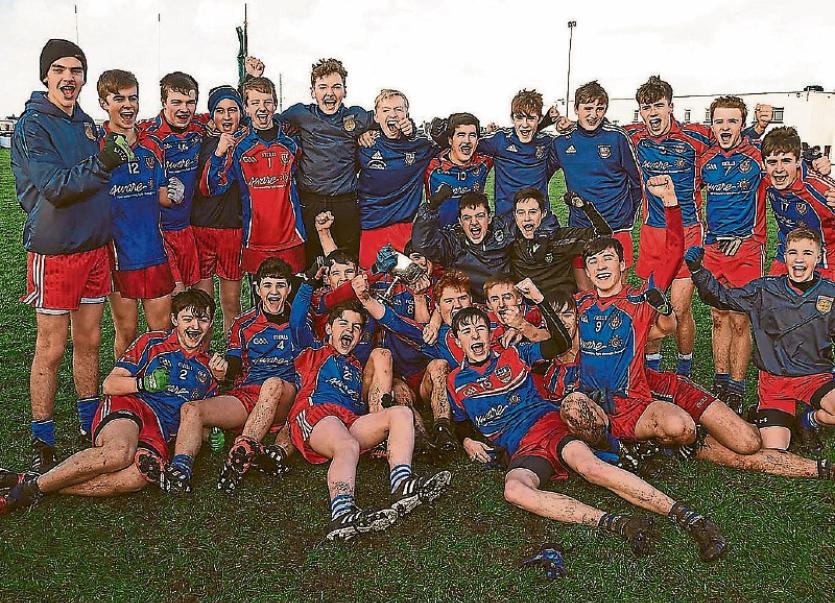 The sheer character and class of Colaiste na Carraige once again saw them prevail in a St Brigid’s Day Hurricane against a gritty St Colm’s side in the Bawnacre Centre, Irvinestown on Monday.

But it took a superb second half display, playing into a howling wind, to ensure victory for a side that was minus three regulars as Ryan O’Donnell, Jordan Burns and Cillian O’Malley were out due to sickness.

Once again the usual suspects walked tall as the Carrick lads hit two clinically executed goals in the 40th and 45th minutes.

The jinking Garry Molloy struck first when he went on a mazy solo run through the St Colm’s defence and hit a low left footed shot to the plucky Derry lad’s net.

Molloy’s marvellous strike was the real turning point of this well contested affair as it put Carrick into a commanding 1-8 to 0-3 lead.

Five minutes later, man of the match Aaron Doherty ran from deep in his own defence to slide the ball home, a goal that was difficult to see as there was no affixed net.

Doherty’s goal effectively sealed this match as it put Carrick into a 2-8 to 0-4 lead midway through the second half.

Undaunted, St Colm’s spurred by inspirational corner-back John Paul Devlin hit six points on the trot and it took a magnificent save from Carrick 'keeper Colm Garvey and an unbelievable point blank miss from Colm’s sub Gavin Donnelly to keep the Donegal lads comfortably in front.

It looked pretty bleak for Carrick as they turned over with a 0-5 to 0-1 half-time lead after playing with a gale force wind at their backs.

Lanty Molloy gave Carrick an early lead, but this was quickly cancelled by a fine individual effort from Devlin, who mirrored Aaron Doherty by running from deep and always posing a threat

The Derry lads were able to crowd them out quite effectively and Carrick hit five wides.

As it was Doherty and Garry Molloy kept the Carrick lads in front, but the lead did not look to be near safe enough.

And two quick early second half points from Devlin and Ryan Doyle cut the Carrick lead to two points four minutes into the second half.

But cometh the crisis, cometh Aaron Doherty and Lanty Molloy with two quickfire steadying points and Brian O’Donnell was also a significant figure in the middle of the field.

Dylan Kelly had a goalbound effort tipped over the St Colm’s bar before Molloy and Doherty sealed matters.

Lanty Molloy paid tribute to the fighting qualities of his teammates in a post match interview.

"The heart in that team is just unbelievable.

“We knew we were up against it going in at half-time but we are a team that just seems to play very well against the breeze.

“And we were also missing three or four of our regulars so it took a great all round effort from everyone to make sure that we came out on top.

“We have had two very tough battles getting to the semi-finals and that should stand to us,” said Molloy.