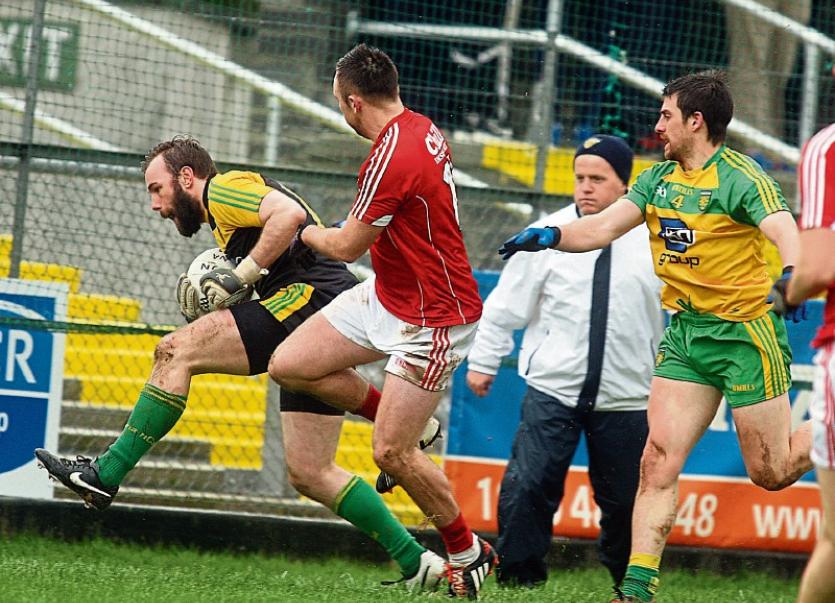 Donegal stay top of the Division One table after another very impressive display against Cork in Fr. Tierney Park, Ballyshannon.

Apart from a brief period when they hit 1-3 at the start of the second quarter, Cork were never in this contest, played in driving rain, but on a pitch that held up well.

After their big win in the opening game against Down, Donegal were just as impressive with some outstanding scores, especially from Odhran MacNiallais and Patrick McBrearty. But there was also a great workrate throughout the field, led by Paddy McGrath and Neil McGee from the back with Eoin McHugh again showing a remarkable ability to create havoc while Martin O'Reilly was also lively. Captain Michael Murphy, in a roving role, put in another great shift.

Donegal were very sharp in the opening half and led by 1-4 to 0-0 after 15 minutes. Cork did have a good period thereafter, but at half-time Donegal had established a six point advantage, 1-9 to 1-3.

Patrick McBrearty, Ciaran Thompson and Michael Murphy from a 50m free had the opening points. The quality of the scores were impressive.

The first goal of the game came on 14 minutes when Martin O’Reilly combined with Eoin McHugh to cut through the middle and leave Brendan O’Connell helpless in the Cork goal as he found the corner. It was a thing of beauty with McHugh's return pass excellent as O'Reilly hadn't to break stride as he cut through.

Anthony Thompson added a quick point but Thompson's opponent, Donal Og Hodnett was central to a Cork comeback that saw them reduce the margin to a point, 1-4 to 1-3 by the 23rd minute. The points came from three Daniel Goulding frees, two of them for fouls on Hodnett, while the half-forward was on the end of a good move to fire past Peter Boyle in the Donegal goal.

It seemed as if all the good Donegal work had been for nothing, but they quickly regained composure and took control again in the final ten minutes of the half with five unanswered points, two of them wonder scores by Patrick McBrearty and Odhran MacNiallais, finding the range from distance. Anthony Thompson chipped in with his second point from play in the half.

Cork's frustration was underlined in the final minute of the half when Paul Kerrigan was fouled but he opted to go for goal but his weakly hit shot was easily saved.

Donegal had Ciaran Thompson black carded within 90 seconds of the restart (and on reviewing on TV it looked extremelyl harsh) but that didn't hold Donegal back as they continued to find the range with man of the match Odhran MacNiallais involved in much of their good work. MacNiallais hit two points and was then on the end of a glorious move involving the McHughs and Neil McGee to fire home the second goal on 53 minutes.

That goal put Donegal into a 2-13 to 1-3 lead and there were 62 minutes on the clock before Cork got their first point of the second half, a Daniel Goulding score, which was their first in 40 minutes.

Before the end Goulding added two more while Patrick McBrearty was almost in for a third goal, his drive just clipping the crossbar on the way over.

Peter Boyle was commanding in punching clear when Cork threatened but overall this was a poor Cork display.

But take nothing away from Donegal, they again were up for the contest and their handling and scoretaking was equally as good as in their opening win in Newry the previous weekend.