Rio-bound Brendan is right on track for Olympics 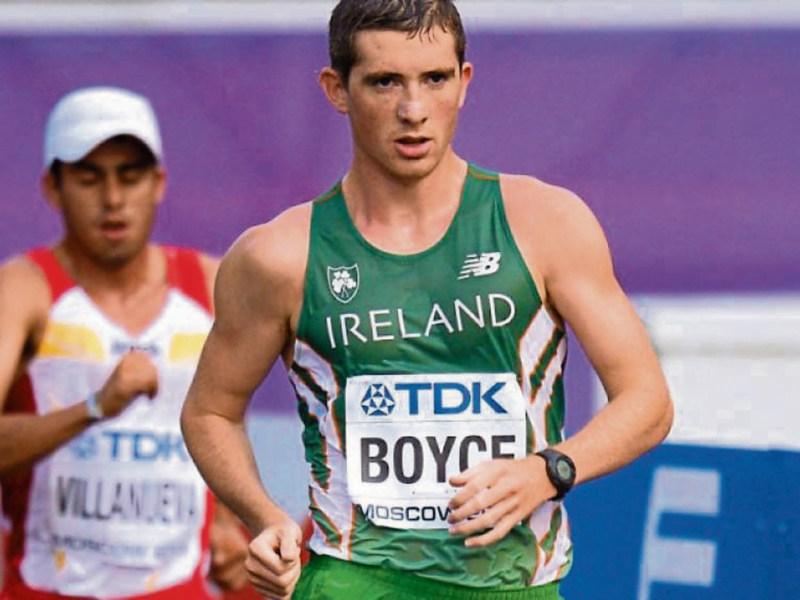 These are exciting times for Brendan Boyce. The Milford-born race walker is just back from Bratislava where his time of 19.51.76 set a new Donegal and Ulster record for the 5k walk.

But perhaps even more significantly, it meant Brendan broke 20 minutes for a 5k for the very first time in his career.

His performance came at the start of a year that in just six months, sees Brendan back on the biggest stage of them all. Last March, along with his friend and fellow athlete, Rob Heffernan, they became the first Irish athletes to book their place at Rio 2016, when gaining Olympic A qualifying times for the 50k walk in Dudince, Slovakia.

Since November 1st last, his training has been geared towards his Olympic 50k race on August 19th next.

His performance in Bratislava last Sunday week is an indication that preparations for Rio are right on track.

“It was a mental barrier more than anything for me,” he says of finishing just under 20 minutes.

“I have come pretty close to breaking it a few times. I have done 20.03 twice, but getting under the 20 minutes has been a long time coming.

“It breaks down mental barriers. What it means now is that I can go into 20ks and have confidence in my speed.

“All the top walkers have gone under 20 minutes for 5ks. Anything around 19.30 means you’re in the ball-park for being a good 20k walker as well.”

The race in Bratislava marked the beginning of a busy and exciting period for the Letterkenny AC member. Next month, he’ll race in Slovakia again, the venue for his Olympic-qualifying time this time last year. He’ll race in the 20k walk this year, instead of the 50k.

In April, he will spend three weeks in altitude training in Morocco before the World Cup in Rome in May. Again, Brendan will compete in the 20k distance in the Italian capital. But after that, the training will be cranked up in preparation for the 50k race in Rio.

Brendan is based in Cork where he has been since shortly after the London Olympics in 2012.

“Every year is getting better and better,” he said.

“Cork is a fantastic place for training. There are plenty of flat areas. We can also go down to Fota Island and there are tarmac walks through the woods, so you can get a bit of shelter from the elements down here if you need.”

He trains along with Heffernan and another Irish international, Alex Wright, who has yet to get the qualifying time for Rio. All three will travel to Slovakia next month but the pressure will be more on Wright who will go after the A-qualifying time over the longer 50k distance.

That pressure was eased from Boyce last March when he finished in 3.48.55, well inside the Olympic standard.

“The big thing was getting the standard time out of the way,” he said.

“I wanted to go to Beijing and the World Championships (in August) with no implications hanging over me for after the race.

“The way things turned out, I didn’t get a time in Beijing (Brendan was disqualified). But if I hadn’t raced last March, I would have had to do another 50k next month to get that qualifying standard

“It freed me up to race Beijing and give it a real good go on the day. Unfortunately that didn’t work out.”

But with the Worlds out of the way all the planning has been towards Rio since last November.

“You don’t really have to factor in anything other than showing a bit of fitness during the season,” Brendan said.

He can do so on March 19th in Dudince and again in Rome and then at another international meet in Spain.

His parents Margaret and Mandy will travel from Donegal to watch Brendan at the World Cup in Rome and with Brendan unlikely to get home again before the Olympics, the few days in Rome will be all the more special.

Mind you, he still keeps in close contact with family and friends here and is well aware of the progress that’s being made in the sport of athletics in his home county.

“Athletics in Donegal has turned a bit of a corner,” he points out.

“There is more belief there than ever before that athletes can come through and get Irish vests. They know they can compete for their country and be on the world stage

“At underage level, young athletes see there’s a pathway through to seniors and then on to bigger things.”

And referring to the fact that Mark English and Tori Pena are also Rio-bound, Boyce added: “Before I competed in London, Danny McDaid was the last Olympian from Donegal in athletics. So there has been a huge change in the last few years.”