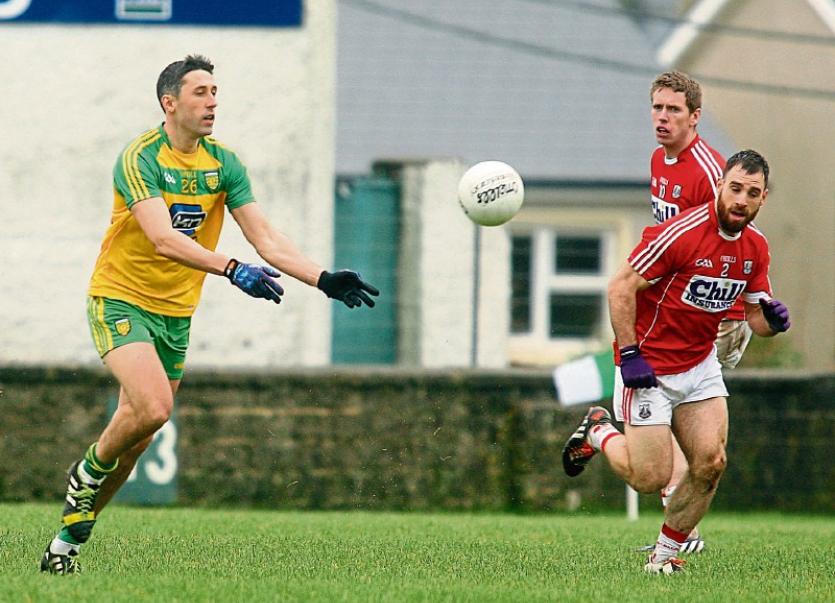 For the second Sunday in-a-row Donegal turned in another great performance to defeat Cork in Ballyshannon.

While the win over Down might have been expected it would have been generally thought that the Leesiders would have given Donegal a better run for their money. Donegal started with the usual high intensity that we have come to expect; they go for the juggler early on and don’t let the opposition settle. If they can get a lead it means the other side have to come at them and it leaves gaps in their defence, a simple but great strategy.

Donegal were sharper on the ball, their handling and passing excellent considering the conditions. Cork, bar for ten minutes in the middle of the first half, looked bereft of ideas and once they had missed what were easy enough chances, both from frees and a couple from play, they never looked to be that bothered about going really after Donegal in the way you might see come the summer.

Donegal’s overall performance was excellent but what stood out for me was their handling of the ball. Passing, both from the hand and from the foot, were rarely off; their point taking and speed of thought was of a high standard and fitness wise they looked extremely sharp.

From the viewpoint of the newer lads introduced this year, Peter Boyle in goals had another excellent game. Eoin Mc Hugh gave another fine performance and his ability to cover the ground with such pace is a huge plus for the squad. Ciaran Thompson was doing well up until his black card and if he continues to produce performances he has done in the last few months, he will not be far away from the championship team; like Mac Niallais, his ability to kick long range points is a huge asset to the team.

I am sure the Donegal management team, while delighted with both performances, will make sure that everyone will remain grounded. They will know that teams will only be finding their feet in the next month or so and getting carried away is not an option but the signs are definitely that we are going in the right direction.

Before I leave the world of GAA it must be hard for the people who reside in the parish of Dromard of county Longford to comprehend the 2,000 euro fine handed down by the GAA to their local club. Dromard are guilty of letting a soccer camp, hosted by ex-Liverpool player Jamie Carragher, take place on their grounds.

The club admitted the offence and have sought an appeal to the fine which is okay. What more are they expected to do. After all the rules are the rules. Some might suggest that this rule is especially hypocriticaldue to the fact as an organisation we opened Croke Park for both soccer and rugby in the past and I have no doubt if the money is right in the future we will do it again and might I add rightfully so.

So why should a club in rural Ireland not be allowed to do the same? After all, Gaelic Games are not under any threat from allowing a bit of soccer or rugby in their grounds. I am sure there are bigger issues out there that are more of a hindrance to the future of the Gaelic games.

If you were a resident in Dromard who contributed to the building and upkeep of these premises and you are not a member of the local GAA club, would you consider the next time you're asked to lend your support? What kind of mentality do we have in this little island that we feel the need to kneel on our own? What good does it do? Why do people feel the need to play the power broker and make the same man pay?

It smells a lot of do of 'do what we say but not as we do, w'. What kind of person reports such matters? What kind of people feel the need to punish a small rural club that are doing their best to sustain GAA activities in the community?

I agree we need rules and regulations to run any organisation and there are a lot of insurance issues with such matters. If a free for all was allowed clubs may lose the run of themselves but I doubt that would happen. Many of the rules in the guide are there from a different stage in time and should be no longer relevant to today’s games. The GAA at times might portray themselves as a modern, professional run sporting organisation and for the best part it is. However, the ugly side comes through now and again and it does not paint the picture we all want to see.

ONE FOR THE SMALL GUY

Last Saturday afternoon Leicester city beat Manchester City 3-1 in Manchester. By Saturday night they were five points clear at the top of the Premiership. This time last year they were struggling to stay in the top flight of English soccer.

They have done this by playing the game in a manner that has eluded many of the top teams; no superstar egos, no tantrums or silly statements from their manager, just hard work, a little bit of luck and a great team spirit.

The teams chasing them have spent hundreds of millions in pursuit of the top prize but have so far come up short. Everyone is waiting for them to explode in the hope that one of the big boys might catch them. Like many I like to see the underdog come out on top. It’s good for sport. It should not always be about who has the most to buy the best