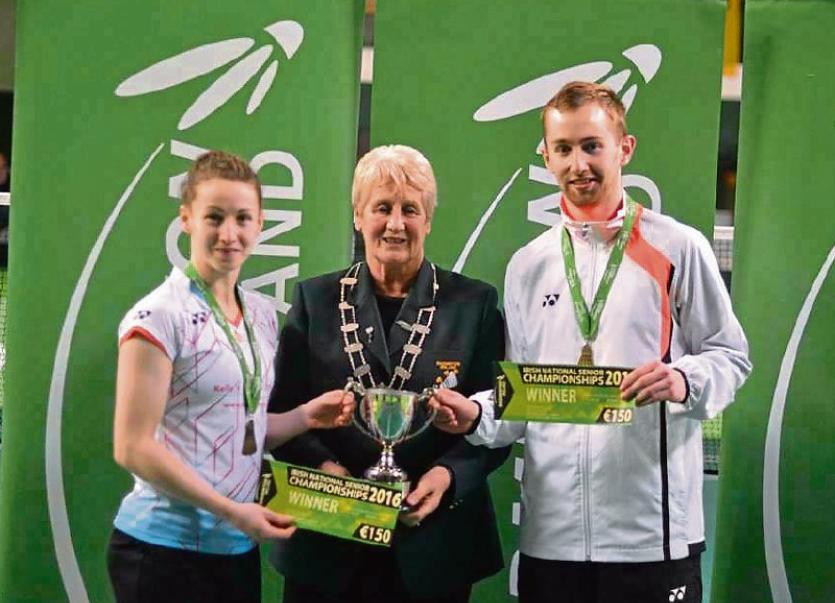 And brothers Joshua and Sam joined forces to land the Men’s Doubles Irish Championship and complete the treble.

“I didn’t give it much thought really that it was the tenth until last week when someone mentioned it to me that I had won the last nine and was going for ten in-a-row,” said Chloe.

“It seems like no time at all since I won my first ten years ago. I was only 17 at the time,” the double Olympian added. Chloe was back in training on Monday morning for the European Team Championships in Russia.

“They are all nice to win but I suppose the first is special and the most memorable, obviously because it is the first. But I have enjoyed them all and it was nice to win again on Sunday.”

Chloe was the number one seed for the championship and she defeated the number two seed, Sara Boyle, in a comfortable two straight set final 21-7 and 21-11 win, on Sunday afternoon at the Irish Badminton Centre in Baldoyle, Dublin.

Her passage to the final was pretty straightforward. She opened the championship on Saturday morning with a 21-11, 21-18 win over Sinead Chambers and she booked her place in the last four on Saturday afternoon with a 21-10 and 21-7 win over Gemma Tobin.

In Sunday morning’s semi-final she recorded a comfortable 21-10, 21-5 over Moya Ryan to clinch her place in the final.

“They were pretty comfortable alright and I suppose the one thing that stood to me this year was the experience I have gained over the last decade winning the championships.It has definitely made me a better player.”

The Mixed Doubles was run in tandem with the singles and Chloe and brother Sam defeated the brother and sister combination of Ciaran and Sinead Chambers in the final 21-13, 21-4 to clinch Mixed Doubles title number on Sunday afternoon.

On their way to the final they had defeated their brother Daniel and his partner Fiona Glennon in Sunday morning’s semi-final. And they showed no family mercy as they sent the younger brother and his partner packing on a 21-11, 21-16 scoreline.

“It is something that we are pretty used to at this stage.It is a regular occurrence in recent years.

“Daniel is not a full-time badminton player like myself and Sam so we just go out and play the game and expect to win because we are full-time players and there is no hard feelings when we win.

“He is used to it at this stage,” Chloe joked.

“We are used to winning at this stage and there are no hard feelings about it afterwards.”

The treble was completed by Sam and Joshua on Sunday afternoon.

And as in the singles and the mixed doubles Sam and Joshua were comfortable straight set winners. They defeated Nhat Nguyn and Paul Reynolds 21-12, 21-11 in Sunday’s final. They had put Sam McKay and David Walsh to the sword 21-9, 21-12 on Saturday.

And to complete an exceptional week for the Magee clan, cousin Kyle Magee, from Strabane, had a clean sweep in the National U-15 Championship championships. Kyle won the Boys Singles, the Mixed Doubles with his partner Rebecca Woods and the Boys Doubles with Mark Kinnerk.

What a day for the clan.