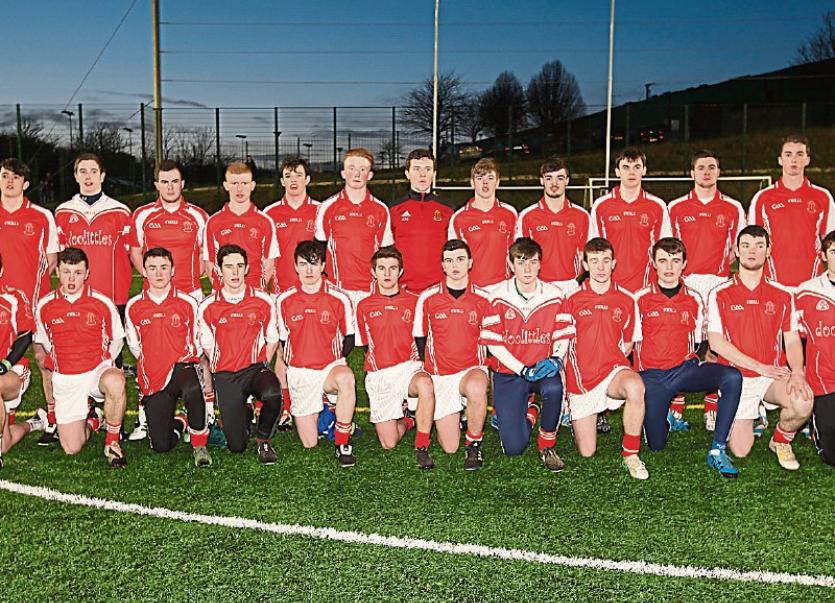 The sheer power and physique of Abbey and the panache of elegant centre-forward Jack Keaney helped push the Donegal side to an historic but deserved Markey Cup final appearance, at icy Garvaghey on Friday night.

Classy corner forward Daniel Gallagher, who hit a priceless goal and a point in the final ten minutes, was also a key factor that eventually settled this hard fought affair.

But the Donegal Town boys would have been really kicking themselves had they lost, as they squandered several gilt edged chances to seal the deal long before the final burst.

They totally dominated in a wind assisted second half but were just not able to kill off the Cavan defence who defended well for long periods but eventually succumbed to Abbey’s constant battering of their rearguard.

But the lighter, plucky Cavan lads badly missed their outstanding centre forward Nathan Renihan, who sustained a broken collarbone in an earlier thrilling draw between these sides.

In the end they were just not able to match the power and panache of the Abbey lads, ably led by Keaney, Brendan McCole, Peadar Mogan and the jinking bag of tricks that is Gallagher.

Bailieboro had the breeze in the opening half but were rocked by an early Abbey scoring blitz that saw the Donegal Town lads nail 1-1 in two minutes.

Cavan’s Niall McCabe made a foot block on Jamie Crawford and Keaney hammered the ball confidently to the roof of the net from the penalty.

But Abbey failed to score for another 18 minutes as Bailieboro settled and the points flowed from the classy Rory Farrell and Aaron Cundelan.

Abbey were forced to feed on scraps before Nathan Ward and the inevitable Keaney broke the scoring famine.

The sides turned over all square at the interval at Abbey 1-3 and Bailieboro on 0-6.

The Cavan lads got the perfect start playing into the stiff breeze in the opening two minutes of the second half.

Rory Farrell nailed a fine point and then the clever Cundelan spotted Abbey ‘keeper Gavin Mulreaney off his line and chipped him with an exquisite delivery to put Bailieboro ahead by 1-8 to 1-4.

But they failed to score for the rest of the match as Abbey began to impose their physical advantage.

Brendan McCole, Keaney and Neil Ward led a constant bombardment of the Bailieboro defence but dropped the ball short repeatedly.

Abbey hit six bad wides before Gallagher eventually levelled matters with a superb point in the 53rdminute after a mazy solo run.

Abbey could have had a goal shortly afterwards, but the Cavan ’45’.

And cometh the crisis cometh Keaney who stayed ice cool as he steered the ‘45’ over to put Abbey back in the lead for the first time since the 3rd minute.

And the impressive Gallagher sealed matters with a clever one-two with Keaney before blasting the ball to the roof of the net.

This was an important and richly deserved victory for Abbey, who will now face Fermanagh Colleges, who defeated St Columba’s Comprehensive, Glentie,s in the other semi-final.

Speaking afterwards Sligo Rovers U-19 soccer star Keaney said it was an important victory for Abbey.

“We showed a lot of character out there tonight and also in the drawn match when we thought we had lost it.

“This is a great achievement and we will just have to get our game going for the final.

“We got a good start with that penalty and I was reasonably confident of sticking it away.

“We missed a good few chances in the second half and went for goals when points were really on instead but I am just glad that all the hard work has paid off.

“We are just so glad to get into the final”.

On the clinching final goal he said;

“I just spotted Daniel and we played a one-two and he finished it really well for us.

“We struggled in the drawn match and they had a really good chance to win it at the end of extra time.

“But I think we really showed what a good team we really are out there tonight.