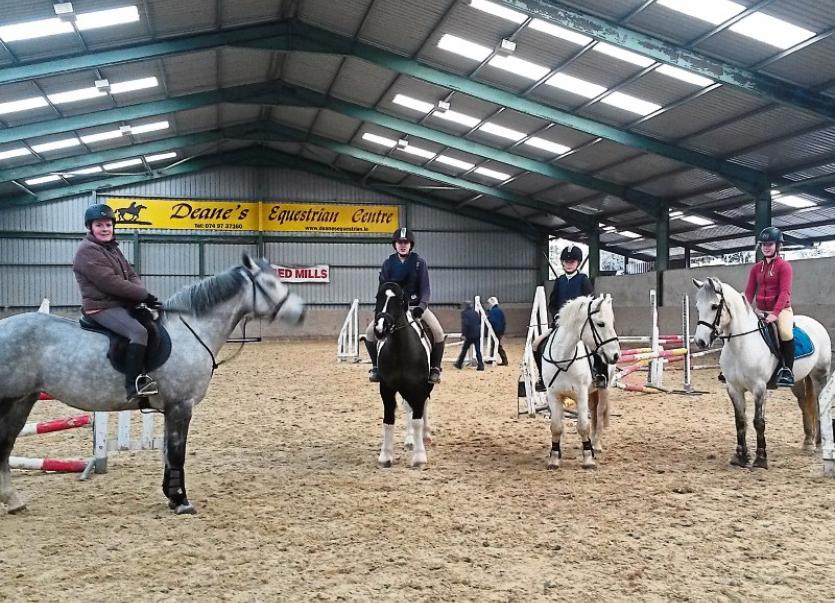 The Winter Showjumping League at Deane’s Equestrian Centre is reaching its conclusion with only the Final Day of the League still to go.

Any riders who have completed 4 Sundays are eligible for prizes on the Final of the League. But all riders are welcome to compete on the day for clear round rosettes.

The Senior Champion Rider competition sees Lucy Stewart on her horse Dedo way out in front of the chasing pack with an impressive 7 weeks clear in both the 70cms and 80 cms classes and she cannot be caught. The Junior Champion Rider competition is really hotting up now, Bridin Walsh on Rocky with another double clear this week takes her points tally to 50 and leaps in front of Hannah Marie Slater and Pierre on 45 points, with Lily Wilcox and her pony Star so close behind on 40 points. With the Final Day of the League still to go any one of the three riders could take the title depending on how the results play out.

In the 40cm class Enya Harley was back in action on Yankee and she picked yet another clear round rosette.

In the 50cm class Lily Wilcox on Star continued their good run of form as they jumped a great round picking up a clear round rosette in the process. The ever steady Hollie Bradley and Tango were clear yet again. Amy Gardiner on Bertie had trouble with the Sat Nav but jumped a very good second round. Andrea Greene on Snookie rounded off the class with a lovely clear round despite a few wobbles.

The 60cm class saw Lily Wilcox back in action on Star but they picked up an unlucky 4 faults in their second round. Amy Gardiner on Bertie were not to be denied a clear round rosette this time as they sailed around the course. Ella McLaughlin on Meenarillagh jumped a fantastic round and took home a much deserved clear round rosette. It all came together for Marie Molloy and young horse Honey as they jumped a super clear round. Andrea Greene on Snookie took another clear round rosette with a lovely round of jumps.

The 70cm class saw Ella McLaughlin on Meenarillagh back in the ring and once again they were clear earning her second clear round rosette for the day. Lucy Stewart on Dedo completed their 7th week with yet another clear round rosette. Shauneen Gallagher on Tibby flew around the course taking some big leaps, all the jumps were still standing as she crossed the finish as she earned her clear round rosette. Marie Molloy was in action again this time riding Ruby who looked like she was never away from competition as she put in a super round of jumps going clear in the process.

The 80cm class saw Marie Molly and Ruby back in the ring and once again they were clear. Lucy Stewart on Dedo claimed yet another clear round rosette. Andrea Greene this time riding Harry jumped a great round to claim her third clear round rosette for the day.

In the 90cm class Bridin Walsh on Rocky continued her good form with a superb display of jumping and picked up a clear round rosette in the process. Andrea Greene on Harry was once again flawless to pick up her fourth clear round rosette for the day.

In the 1m class there was some friendly rivalry as Megan Boner on Creggan Boy took on Bridin Walsh and Rocky. It was to end honours even as both riders finished their rounds with superb clears.

Megan Boner and Creggan Boy took on the 1.10m class and despite rattling a few poles all was clear.

Next Sunday the 21st of February is the Final of the Winter League so get cleaning and polishing horses and tack. To be eligible to compete for prizes Horse and rider must have competed in 4 of the previous Sundays. But all riders are more than welcome to jump on the day.

Thanks to our judges Cyndi Graham and all the arena helpers who helped the show run smoothly. For further details contact Alax Deane on 074 9737160 or check Facebook at Deane’s Farm Equestrian Centre.