Coll saves the day for Donegal in Oscar Traynor 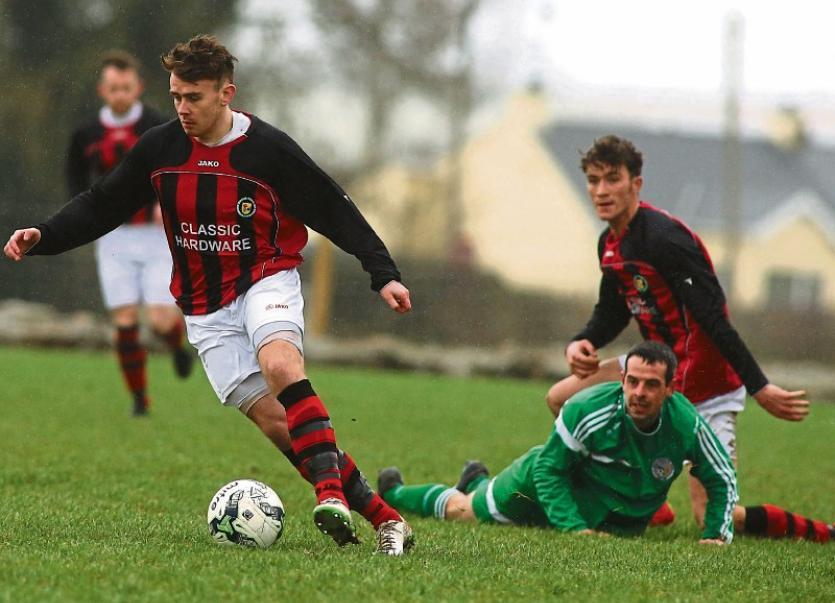 Joe Coll's fantastic save in sudden death penalties saw the Donegal League advance to the semi finals of the Oscar Traynor Cup on a day of high drama at The Moss.

The Glenea United netminder dived low to his right to keep out substitute, Derek Bowens' kick.

It meant the home side won 6-5 on penalties to advance to a semi-final meeting with the Clare League.

While Coll was the hero at the finish, he wouldn't have been playing in the game were it not for the fact that regular No. 1 Christopher Sweeney was left out of the panel. Sweeney played GAA with his club Gaoth Dobhair on Saturday.

But Coll has plenty of experience of the big occasion and he came good when it mattered most.

Speaking after the game, Donegal League manager, Brian Dorrian, admitted that the North East League probably did enough to win the game over the 90 minutes.

The visitors were definitely the better side in a first half in which the Donegal League really struggled to get going.

The North East League went in front as early as the 8th minute when Barry Kavanagh's pass released Paul Delaney in on goal and he produced a fine finish to beat Coll.

Kavanagh, playing up front, caused the home side plenty of problems in the tie. He was a constant menace in attack and the home side wouldn't have been unhappy when he was forced off because of injury towards the end of normal time.

Conor Walsh and Cormac Reid also went close as the North East side threatened to increase their lead.

In contrast, the home side never really threatened until the second half when their performance was so much better.

Thirteen minutes after the restart, it was level. Gary Merritt's free kick was beaten out by the keeper but Kyle Black was able to control the ball and fire it into the bottom corner.

It was a wonderful finish from the Milford man and all of a sudden it was game on.

From there-on-in, it was a very even contest, although, the North East League had the better opportunities to score again.

Twice they had efforts on goal cleared off the line while Conor Walsh almost caught out Joe Coll with an audacious lob from all of 40 yards, only for the ball to drift wide.

There were chances too in extra time. Joey Cullen, on as a substitute for Donegal, almost gave his team the lead when his shot was saved by Conor Gilsennan.

And in the second period of extra time, Damien Crossan had a chance to win it for the home side, but he shot wide when perhaps he should have done better.

In fairness, Crossan stepped forward to take one of the penalties in the shoot-out. And while Donegal missed their opening penalty when Gary Merritt's effort was saved, they managed to take the penalties to sudden death where Joe Coll made the all important, match-winning save.