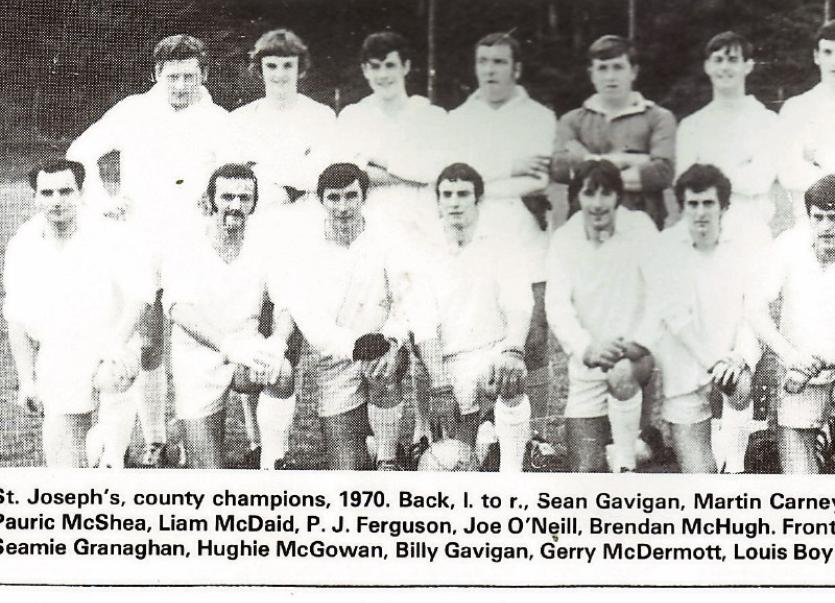 On Sunday next, Mayo come to MacCumhaill Park for the third series of Allianz League games and one of their midfielders is partly on home ground.

Tom Parsons of Charlestown has re-established himself in the engine room of Mayo this season and he has a very strong Donegal connection.

His mother, Carmel, is from Bundoran, a member of a large Barry family that have a fairly strong GAA connection as well.

Carmel’s brother, Peter Barry, was a very prominent playing member of Bundoran and St. Joseph’s during a very successful period of the 1970s; a team that included Martin Carney.

Barry, like his nephew, Tom Parsons, was also a midfielder, although not reaching the 6’3’’ of the Mayo man.

Back in 1970, Peter Barry, at 18 years of age, broke into the St. Joseph’s team and was first placed at wing half-back but was midfield when the Ballyshannon-Bundoran combination defeated Rosses Rovers in the county final.

From then until 1976, Barry was a regular at midfield as he collected four more senior championship medals from 1973-1976 and also won an Ulster club medal in 1975.

His fellow teammate at St. Joseph’s, Brian McEniff, was also a mentor to the young Barry when he returned to Bundoran in the mid-1960s after a period in Canada.

“I remember running school leagues when I came back and Peter was one of the captains along with Paddy Conlan, Billy Gavigan and PJ Ward.

“He wasn’t tall (for a midfielder) but he was like a gorilla; he had arms to his knees,” said McEniff.

“He could jump with (Martin) Griffin and was always able to reach above his opponents. He also had two relatively good feet,” McEniff, who said that he went on to play for Donegal at minor, U-21 and senior level.

“He was a very steady club footballer,” said McEniff. McEniff said that Peter went to America in the mid-1970s. Barry now resides in Sheffield, England.

Another colleague in Bundoran and St. Joseph’s, Seamie Granaghan, also had great memories of Barry. Seamie was captain of St. Joseph’s in 1970 when Barry broke into the team.

“He had a great spring and he was fearless on the field. He was a very important player in our side. He wasn’t a major scoregetter but he won ball and laid it off. He was a wholehearted player,” said Granaghan.

On Sunday, McEniff, Granaghan and many more in the south of the county will be taking a special interest in the performance of Barry’s nephew, Tom Parsons, a player who is still fighting for a permanent place in a talented Mayo squad.

"He was Mayo’s find of 2015 - even though he’s been around on and off since 2008 when Sean Boylan called him into Ireland’s International Rules squad when still only 19/20," says Western People Sports Editor, Anthony Hennigan.

"He was a member of the Mayo team that lost the 2005 All-Ireland minor final to Down, and remained minor for the following year. Injuries dogged his early years as a senior player and he was actually cut adrift in James Horan’s first year in charge of Mayo in 2011 until recalled during the 2014 campaign.

"But it was last year where we saw the best of him. Again, injuries restricted him to just a 70-minutes display against Cork in Round 6 of the National Football League (he was not fit to play against Donegal a week later) but so impressive was he against the Rebels (he scored 0-3 from midfield) that he was an automatic choice come the summer, and excelled when Mayo fought back from the brink to secure a draw against Dublin in the All-Ireland SFC semi-final," says Hennigan.