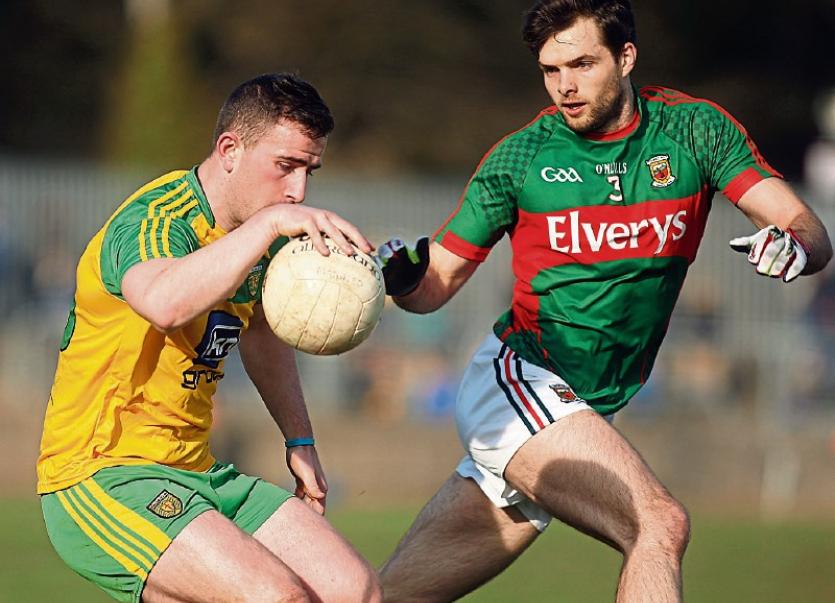 dhran MacNiallais was not at all surprised that Mayo tore into Donegal from the word go and were really pumped up for yesterday’s shootout by the Finn.

“We came here today expecting a very, very tough game and that’s what we got,” said the Gaoth Dobhair man, who scored two of his team’s points

“They had lost their two opening games and we knew they would give a massive push to get their first two points of the year, and that’s what they did.

“They battled hard there, but we knew if we stuck to our game plan throughout the game, that we would keep them to as minimum amount of scores as possible.

“I think we did that well enough. They got the penalty near the end and that nearly killed us off, but we came back again and got the goal, so that was a massive win for us.”

“I was saying to the boys when we were doing the warm-up that there was a championship feel to it.

“Mayo always bring a massive physicality to every game they play. They have massive men around the middle – big, strong players.

“The likes of Lee Keegan, Keith Higgins and Colm Boyle are all physical, and we were expecting a big physical battle today, but we coped well with it around the middle of the park I thought.”

Leo McLoone’s goal in the middle of the second half and shortly after Diarmuid O’Connor had hit the Donegal net at the other end was the turning point of the game.

“It was a good move. I don’t really remember it now – I just remember Leo finishing it off.

“Leo came in there and made a massive difference, as did all the boys that came off the bench.

“I suppose the difference for us this year is the boys coming off the bench, and we have a big squad there with the young fellas as well.

“Leo proved that today, and I suppose he was the difference in the end up getting that goal.”

The Goath Dobhair man was also high in his praise for Christy Toye.

“Christy has been training hard this last few weeks to get back into shape. He’s getting there now, himself and big Neil and Karl Lacey isn’t too far away either.

“We still have a few boys to come in - David Walsh has to come back in too – so we’re not at full-strength yet.

And he insisted it was good to have Rory Kavanagh back.

“Yeah he did well, he had a great game and I think he got a point too in the first half.

“He was very, very good in the middle of the park there. He kind of controlled things at time, and he’s an unbelievable player to have back.

“Even at training or in the dressing room, he’s a big voice. He’s a great physical player and carries the ball well.

“When he’s on the ball, he’s calm and he always does the right thing.”