O'Reilly happy to put one over on his father's native county 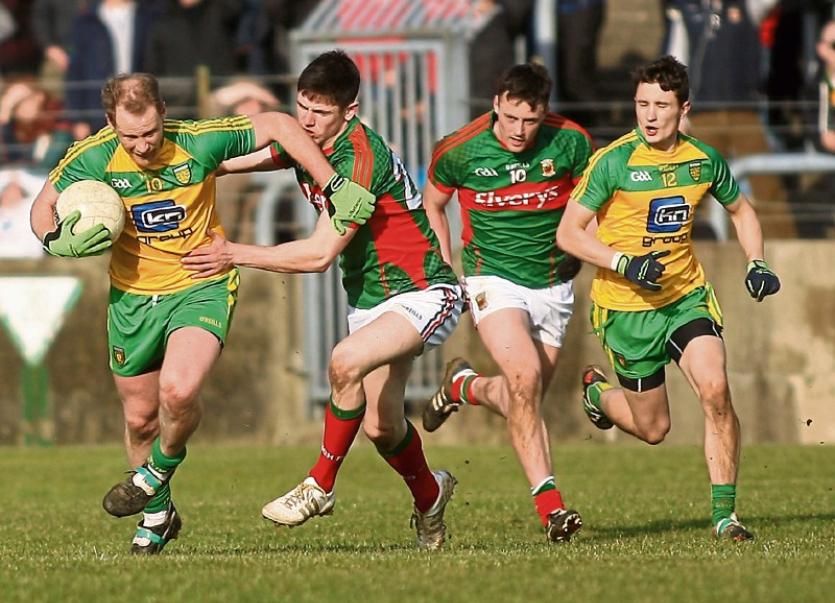 Mayo may be a strong part of Donegal’s speed merchant Martin O’Reilly, but there were no mixed messages after yesterday’s thriller on the Banks of the Finn.

And genial Marty confirmed that his father Terry O’Reilly was fully behind him in a bruising battle against the ‘home county”.

“If Mayo were playing anyone else he would be supporting them, but there is never any doubt when Donegal is playing,” said a happy Martin.

O’Reilly ran his socks off in yesterday’s thriller and was at the hub of so many Donegal attacks.

He had to retire two minutes from time with a slight shoulder injury.

And even though he was wearing a sling for the post match interview, Martin said the injury was not too serious.

“I went off just for a precaution and it is not too bad at all.

“That was a great game to be part of out there today but we kind of knew that it was going to be a real battle.

“Mayo came to Ballybofey with full intentions of victory and really put it up to us for long periods out there”.

And the Westerners seemed to strike the penalty goal at the right time.

“It was a real thriller all right and it looked grim for us when the put away the penalty but there is real grit in this team.

“And we showed that we have quite a strong bench as well.

“Leo McLoone came on and Big Neil was a bit unlucky having to go off right away but there is a good buzz in this squad and great competition for places”.

Although picked at left corner forward, O’Reilly was the oil in the engine of the side and has loads of stamina.

“I don’t care where Rory Gallagher plays me as long as he gives me a jersey I will play anywhere at all for him.

“It is a great honour to wear the Donegal jersey and it is something I will always cherish”.

And Reilly’s constant tracking and attacking was very important in yesterday’s battle by the Finn.

An added bonus for Martin was that it happened on his home soil.

“Of course it is always that little bit extra special playing at home in front of your family and friends.

“That really makes the day”.

“Donegal have got off to a good start and we are just taking it one game at a time.

And a few days rest for the shoulder and Martin will be looking forward to a trip to Kerry for a joust with the Kingdom.

Either way, he will be putting in a speedy shift, for the good of Tir Chonaill, a real team player.