Disappointing day for some of the league's leading sides

Drumoghill out on their own at top of Premier Division 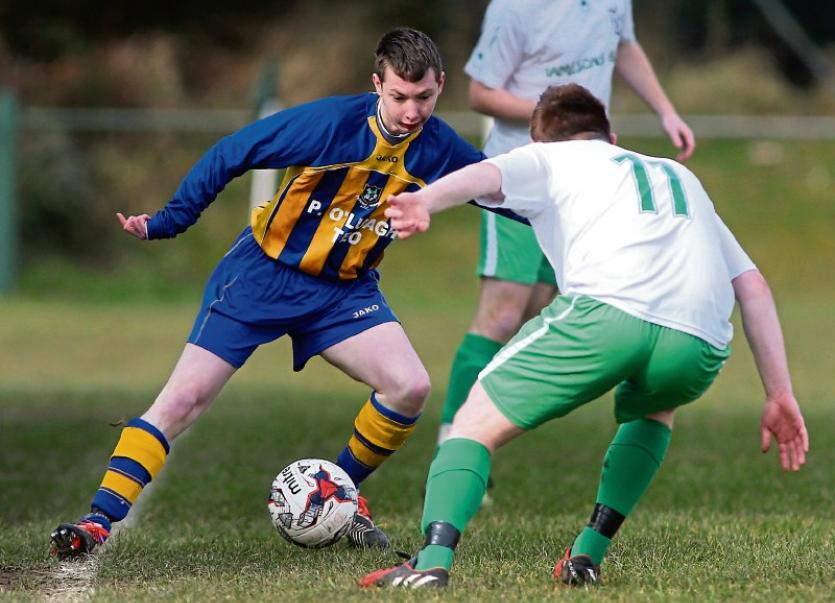 It was a day of much signifance in the Donegal League's Sunday divisions yesterday with some of the leading sides suffering defeats.

Drumoghill FC are out on their own at the top of the Brian McCormick Premier Division after beating fellow title rivals, Milford United.

In Division One, Donegal Town went down to a home defeat against Raphoe Town, so Lagan Harps lead the way there.

Kilmacrennan Celtic moved off the bottom of the table with this comprehensive victory over Cappry Rovers at Cappry Park leaving their hosts rooted firmly in the automatic relegation spot.

It was a close enough opening period with only Seami Nani Friel’s goal between the sides at the interval. Christopher Dillon made it two early in the second half before Daire Mc Daid helped himself to a hat-trick to leave five goals the difference.

Kilmacrennan were not finished however, and Gary Gorman added two more goals to complete the rout.

The home side began the brightest and Ronan Tourish broke through but found his effort off target after 10 minutes. Gweedore's Shane Porter had a header well saved by Castlefin keeper Simon Mc Menamin following a corner from the right. Castlefin's Ronan Tourish and Emmett White had efforts well saved from visiting keeper Michael Mc Kelvey.

In the second half the home side’s best opportunity came in the 65th minute when Emmett White cut inside and unleashed a strike from 25 yards which cannoned off the crossbar. The hosts kept plugging away and were rewarded when Ian Ward latched on to a Johnny Doherty flick to smash into the net deep into stoppage time.

Drumoghill got ahead in the race for the title with an away win in Milford. Milford started well scoring through Damian Casey after good work from Kyle Black.

Drumoghill came back well in the last 20 minutes of the first half with Richie Moore scoring from 18 yards and then Gerard Mc Granaghan scored after Milford failed to clear.

At the start of the second half Milford started well but failed to convert chances until Joey Cullen headed home to level matters.

Richie Moore converted a penalty and then Chris Malseed scored late on to ensure three points for the visitors.

Keadue set out to keep things tight and managed to frustrate Convoy for long periods of the game. Convoy created a few good chances in the first half but were either wasteful in front of goal or found Ben Boyle in inspired form in the Keadue goal.

It was more of the same at the start of the second half but Keadue almost took a surprise lead with around an hour gone. A quick counter attack left them through on goal only for Chris O’ Donnell coming to the rescue with a double save for the home side.

Convoy’s pressure eventually told when Ryan Carlin volleyed home from the edge of the box in the 65th minute.

They had to wait until the 80th minute to get their second of the game. It was that man Ryan Carlin again who poked home when Johnny Robb headed a great Darren Harvey free kick back across goal.

Cranford made a bright start to the game putting pressure on the Lifford defence and forcing them back. This pressure paid off when Keelan McGee broke down the left wing and crossed for Andrew Kelly to head home.

Cranford continued to press and again attacked down the left wing with Kelly cutting onto his right foot and riffling into the top corner for his second.

Lifford responded well, and ten minutes after the restart they pulled one back from the penalty spot.

Kelly completed his hat-trick not long after that when a mix up at the back allowed him to toe poke home. McGee then secured victory with a fine shot from long range.

On 13 minutes Chris Toner made great break from the left hand side and tried to play in Kevin Kelly but a great interception by Frank McGee stopped a certain goal.

Lagan however, went in front on 44 minutes when a great through ball released Marty Brogan who finished low past the Gweedore keeper.

Gweedore though drew level right on the stroke of half time when Paul Ferry found the net from long range.

Lagan created some good chances in the second half with Kevin Kelly and Travis Crawford both going close.

Chris Toner then played a great one two with Kenny Doran and finished superbly from 18 yards.

Best for Gweedore were: Shane O’Donnell and Paul Ferry. Lagan’s best were Kevin Kelly and the industrious Chris Toner.

Donegal almost retrieved what at one time looked like an unsurmountable obstacle. Three headed goals from Raphoe Town at the start of the second half gave the East Donegal men a great advantage.

Donegal Town are made of stern stuff however, and they pulled back two goals before the finish.

An entertaining affair at the Hospital Field.