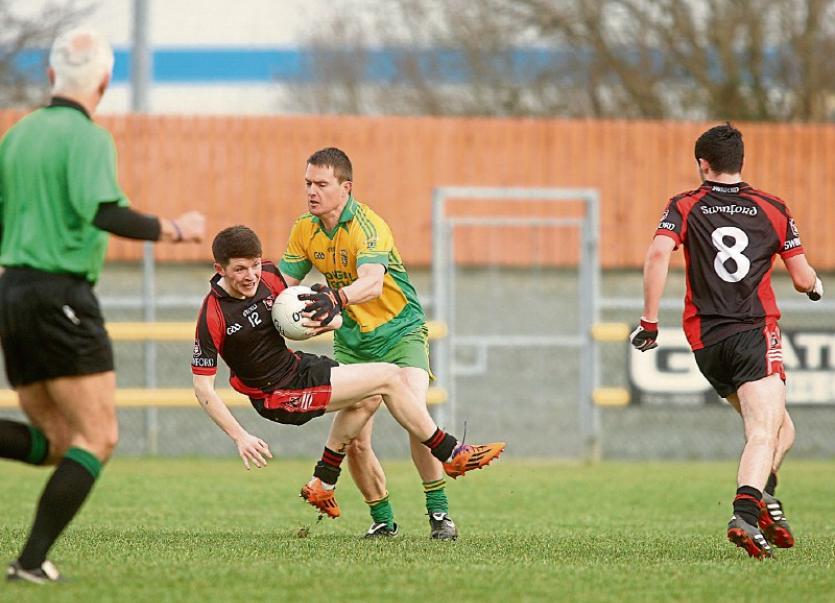 I don’t know if this exercises many people, but I’m getting more and more angry about the use of the Black Card in the GAA game. It’s introduction was designed to punish cynical fouling, especially when denying a player a scoring opportunity, but some of the offences are just trivial and even in some cases are not worthy of a card at all.

Just take Neil Gallagher’s black card on Sunday last. A tussle for the ball in the middle of the field and after he was fouled he tries to reach out to get the ball on the ground and in doing so he reaches out as he falls and comes in contact with an opponent’s leg. Technically, it is a trip, but was it cynical? And even more importantly, did it deny Mayo a scoring opportunity?

The rule is clear, and the referee cannot be blamed for implementing it. But surely, this rule has to be revisited.

It's worth highlighting the disparity between what happened Neil Gallagher (banished from the field for an innocuous trip) and the dangerous head-high challenge by Shane Nally on Ryan McHugh in the opening half, to stop McHugh breaking through on the Mayo goal. The punishment for Nally was a yellow card, which allowed him stay on the field. Just seconds earlier, Conor O’Shea performed a similar head-high challenge on Eamon McGee to stop him breaking clear from defence.

Where is the justice in these rules?

O’Shea and Nally stayed on the field but Gallagher was banished.

The win for Donegal on Sunday puts them in a very comfortable place for the remaining four games. The six points (along with their impressive +29 points difference) almost certainly ensures their Division One status.

Sunday’s game over a difficult Mayo side will also increase confidence. It was a game that was on a knife edge throughout but Donegal held their nerve and that can only be good for the future.

It would be wise, though, not to get carried away. Mayo did have chances that they could have taken and they were without the inspirational Cillian O’Connor.

Indeed, if Aidan O’Shea was a little sharper in the final ten minutes, they might have left Ballybofey with something to show for their efforts.

Imagine if Michael Murphy got the same two opportunities at a vital stage of the game. I think he would have made a bigger impact. Yet O’Shea won the All-Star last year in place of Murphy.

There were plenty of big performances with Ryan McHugh and Paddy McGrath big driving forces. Both have been big players in the three games to date with McGrath seeming to have endless energy. Working back in Donegal seems to be really good for him.

At this stage it seems that Down are destined for the drop back to Division 2, while Mayo and Cork are in danger of joining them. If those two end level - which is a possibility, then Mayo will make the drop as they would lose out in the head to head.

The real surprise packets of the season are Roscommon. They threw away their opening league game against Monaghan with a poor kick-out in the final minutes but have since gone to Killarney and Pairc Ui Rinn and notched victories. Their 4-25 to 3-10 win away to Cork on Sunday last was an unbelievable result. They come to O’Donnell Park, Letterkenny, on Sunday week and there should be another bumper crowd as the Rossies travel in big numbers.

Meanwhile, Donegal head to Tralee this Sunday and the comfortable position that Rory Gallagher finds himself in allows him latitude to introduce more players, but I’m sure he will also want to keep this great run going.